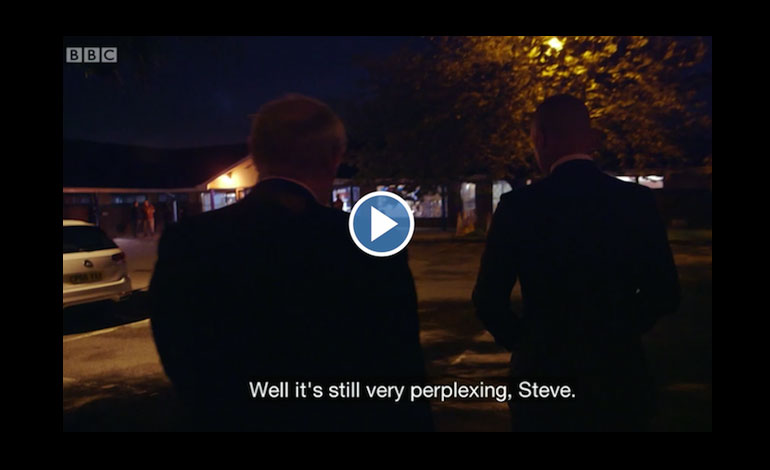 A BBC documentary which aired on 20 November gave Jeremy Corbyn’s supporters plenty to smile about. Labour – The Summer That Changed Everything followed a handful of MPs from the right of the Labour Party during the 2017 general election, documenting their hand-wringing about Corbyn’s leadership and their subsequent shock at the election results, which saw Theresa May lose her parliamentary majority.

But one 20-second clip – in which Stephen Kinnock MP and his father, former Labour Party leader Neil, tried to make sense of those results – stands out as comedy gold.

Labour MPs Stephen Kinnock, Lucy Powell and Ruth Cadbury all called for Corbyn to resign during 2016. And they all agreed to appear in a BBC documentary in the run-up to the 2017 general election. Their thoughts on Corbyn’s prospects in that election were pretty clear. This was Kinnock, speaking [05:00] to the BBC in May:

It looks at the moment like the 8th of June is not going to be a good night for us.

He pre-emptively tried to lay the blame [05:08] for the ‘inevitable’ Conservative landslide at Corbyn’s door:

If a party fails after seven years in opposition to make good forward progress at an election, then the leader has to take responsibility for that. And, you know, on the 9th of June Jeremy is going to have to take a long look in the mirror and decide.

Fast forward to election night on 8 June. Few who saw the documentary will be able to forget the reactions of the three MPs as they watched the exit polling:

Labour MPs Lucy Powell, Ruth Cadbury and Stephen Kinnock, who had been calling for Mr Corbyn to resign, as they'll be seen on BBC2 Mon 9pm pic.twitter.com/yiYuHo3fvq

The expression on Kinnock’s face when he saw the exit polling has drawn a lot of comment on social media. So has the moment Helle Thorning-Schmidt, former prime minister of Denmark and Kinnock’s wife, stepped in to warn him off giving interviews about the exit polls.

But it was a 20-second conversation between Kinnock and his father that best sums up the current predicament of the Labour right:

As they left the pub where they’d been watching election coverage, former Labour leader Neil said to his son:

Stephen agreed, and then went on to claim the Corbyn-led party’s success for the Labour “mainstream”. There were, he pointed out:

a lot of common-sense, mainstream Labour policies in the manifesto.

Not only did Kinnock, who we’d just watched talking down Corbyn’s Labour over the preceding half-hour, not understand what was happening. He also tried to claim the dramatic shift in public opinion towards Labour as a victory for ‘moderates’.

Kinnock senior became Labour leader after Michael Foot’s resounding general election defeat in 1983. Despite losing two general elections, he is widely credited – by ‘centrists’ – for saving the Labour Party by laying the foundations for Blairism. His take on the situation was perhaps unsurprising.

But Kinnock junior has cut his political teeth while New Labour was trashing the party’s long-term electoral chances by neglecting its core voters and famously gambling that “they have nowhere else to go”. He was among those Labour candidates who sought to distance their campaigns from Corbyn, believing him to be a liability.

Yet Corbyn, despite being routinely undermined by his own party and smeared by almost the entire mainstream media, won Labour 40% of the vote share in the election. It was the biggest increase in vote share for Labour in any election since 1945:

The Labour MPs who took part in the BBC documentary may find their reputations a little bruised in the short term; the Corbyn-supporting public enjoyed a well-earned laugh at their expense. In the long term, though, they urgently need to learn the lessons of the 2017 general election: had Labour ignored the doomsayers and united behind its leader, we might find ourselves in a very different place now.