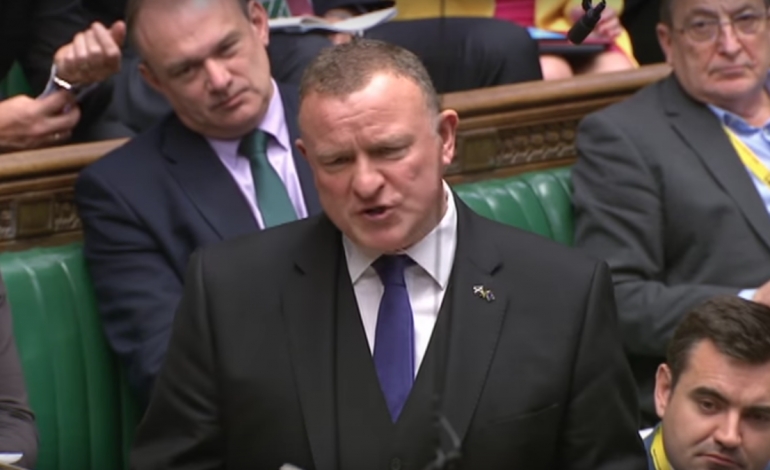 SNP MP Drew Hendry is outraged that Conservative MPs “laughed” as he brought up the topic of Universal Credit during Prime Minister’s Questions (PMQs) on 15 November. He voiced concerns about how terminally ill people were suffering while waiting for their benefit payment. But as he raised the issue, Conservatives on the benches appear to have laughed. Hendry has called those responsible “cruel”, although the Conservatives have denied they were laughing.

You can listen for yourself here:

The Badenoch and Strathspey MP questions what could possibly be funny about “cancer patients who are dying before their universal credit came in”. He had told [0:17] the House that these patients are:

forced to self-declare that they are dying even if they didn’t want the doctors to tell them their fate.

Hendry then called on Theresa May to “end this cruel condition”. As The Canary previously reported, Labour peer Baroness Hollis found people’s experiences with Universal Credit to be “deeply distressing”. She argued that this ‘meaner, nastier and harsher’ benefit is having a “catastrophic” impact on its claimants.

The day after PMQs, there was a debate on Universal Credit. During that debate, Hendry objected to the Conservatives’ laughter. But they denied it.

Many MPs have pressured May to reduce the six-week waiting time to receive payment, highlighting the harm this was doing. The government is reportedly preparing to reduce the waiting time. Hendry believes that Universal Credit, if it isn’t halted or fixed, “is a disaster”. He also said he is:

always astounded by the lengths that people who haven’t received universal credit [in their constituencies] will go to defend the system when they haven’t actually seen what has happened.

Perhaps being so out of touch with how policies actually affect people can explain why anyone would laugh at their catastrophic impact. But for Hendry, the laughter is more disturbing than that. It indicates a lack of compassion for some of the most vulnerable people in the country.

– Check out more articles from The Canary on Universal Credit.