The Chancellor had a good laugh, then casually announced the UK's worst economic outlook since 1983 [TWEETS] - The Canary 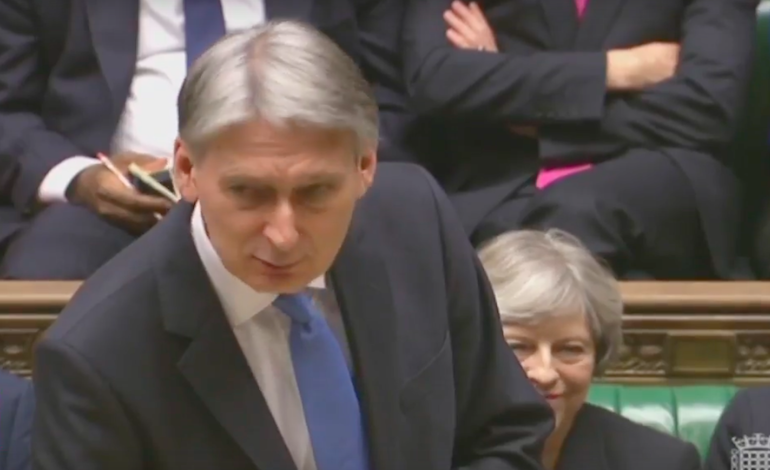 While the Chancellor laughed and cracked jokes during the autumn budget 2017 in parliament, he also announced the UK’s worst economic growth outlook in modern history.

Oh how we laugh

I know Jeremy Clarkson doesn’t like them, but there are many other good reasons to pursue this technology so today we step up our support for it… Sorry Jeremy, not the first time you’ve been snubbed by Hammond and May.

He also joked about cough sweets, and “long, economicky words“. The Chancellor was apparently in such a lighthearted mood that The Telegraph called his budget “joke-filled”.

But what the jokes disguised is anything but a laughing matter. The government released growth figures back in March at Hammond’s last budget. And a matter of months later, they have been revised down. But it’s not just any revision. This revision forecasts the UK’s growth to be its worst over a sustained period in modern history. It is in fact so grim that we would have to go back to 1983 or before to find worse.

Here is what Sky News economics editor Ed Conway tweeted on the matter:

He continued, looking at historical forecasts on UK growth:

Forecasts often miss the mark, of course. But they are of extreme importance in the shaping of monetary and fiscal policy. The budget is heavily influenced by how the government thinks the UK economy is going to develop.

But the laughing Chancellor and his Conservative colleagues didn’t seem to think that the horrific outlook for the UK was such a big deal. In fact, with an NHS beyond crisis, ongoing cuts to public services, and the continuing haphazard management of Brexit, the government seems determined to drag us back decades in more ways than one.