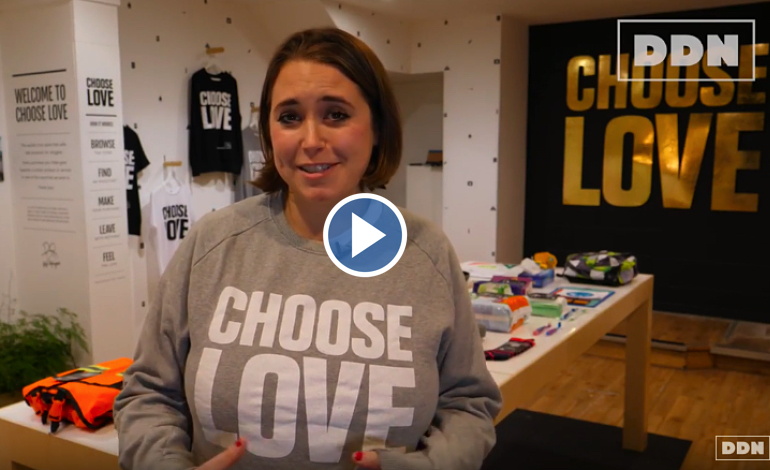 Double Down News has released a video highlighting a new Christmas shop that is taking the spirit of giving to a whole new level.

Help Refugees, a charity that emerged in the summer of 2015 in response to the refugee crisis, has opened the ‘Choose Love’ shop. Running until Christmas Eve, you can buy products for refugees in the physical store. Gifts are also available online.

Get that warm fuzzy feeling this Christmas

During the festive period a lot of people start to feel frustrated by the consumerism everywhere.

It should really be about the feeling of giving. And that warm fuzzy feeling inside doing something for someone else is the best feeling in the whole world. So, it was really cool to create a physical place where you can… come down and get that feeling.

If you visit the physical store in London, you can look at the different items on display. Each one, Naughton explains [01:12], could be “life-saving for a refugee”.

One of the items people can buy, for example, is a child’s life jacket. And seeing items like these can have a profound impact on people. Naughton says [01:21]:

when people come in here and think ‘God, like my child is the same size as that’. That’s taken them to a whole different place. The same with the child’s coat and the thought of a child being really cold this winter while we’re all tucked up at home having a mince pie. I think it’s made people really think.

The shop also allows you to buy school supplies to make sure children can go to school. As Naughton explains [01:50]:

Who knows what that might lead to, there’s a whole lost generation of children out there. We have no idea what those kids might grow up to do. You know they could be the kid to cure cancer…

Naughton says [03:26] that kids as young as eight were living on their own in a refugee camp in Calais. Some refugee children are now in the UK because of the settlement scheme known as the Dubs amendment. The government plans, however, to cap the total amount of child refugees entering under this amendment at 480. It was originally hoped that 3,000 would be taken in.

Naughton says [03:32] she was lucky enough to see one of the children, who is now in school:

I asked him what his favourite subjects were and he said ‘mathematics and literacy’… my heart melted… I’m so excited to see what he goes on to do with his life.

The prospect of winter

At the beginning of the video Naughton explains [00:15] that, last winter, a mother in Lebanon showed her the grave of her 2-year-old child who had frozen to death the night before. And the onset of winter is causing real concern for many humanitarian organisations.

As Oxfam recently reported, over 2,000 unaccompanied children are waiting for safe shelter in Greece. Oxfam says its islands are overcrowded with lots of families sharing unheated tents. The UN High Commissioner for Refugees (UNHCR) has also stated that more funding is needed to help refugees during winter in the Middle East.

So ‘choosing love’ this Christmas could be the perfect antidote to the usual commercialism and consumerism the holiday attracts. And it will certainly make someone’s winter a little more manageable and safe. There is surely little that captures the true spirit of the season more than that.

– Visit the Choose Love online store or the physical store in London.

– Read more articles from The Canary on the refugee crisis.