Britain has a Prime Minister. But it doesn't have a leader. [EDITORIAL] - Canary 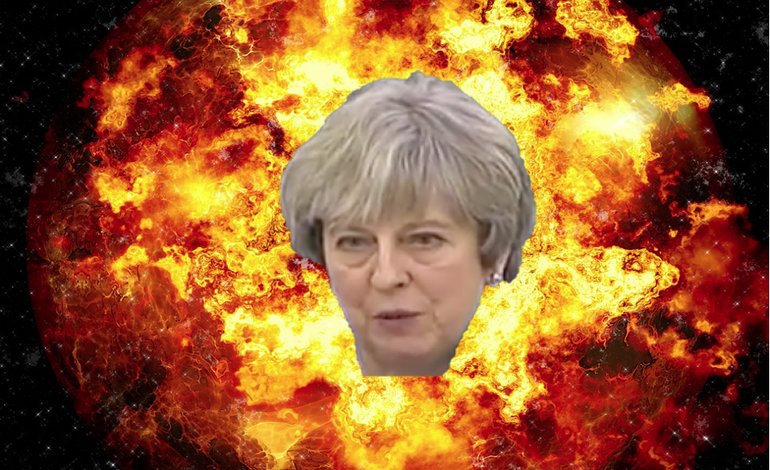 At 8.39pm on the Wednesday before Christmas, Theresa May announced the resignation of her third secretary of state in eight weeks. First Michael Fallon in Defence, then Priti Patel in International Development, and now First Secretary of State Damian Green. Her Brexit Secretary David Davis had promised to resign if Green went, and it was only his lack of integrity that meant May wasn’t down four. The Prime Minister’s year has been one of calamity and callous inhumanity. Britain has a Prime Minister. But it doesn’t have a leader.

Little sums up May’s year like her final performance at Prime Minister’s Questions (PMQs) this week. A Labour MP informed the Prime Minister that (in the borough of Wandsworth alone) nearly 2,500 children will be homeless this Christmas. Instead of offering sympathy and/or support, May argued that the definition of child homelessness wasn’t fair:

Imagine having the power to end child poverty, and choosing not to. How would you justify it to yourself?
Like this:pic.twitter.com/gZkJDrjla7

This will come as little solace to the mother of an autistic son and a 10-month-old baby in Wandsworth who will spend Christmas in rat-infested temporary accommodation.

Worse, according to research by the Joseph Rowntree Foundation, this is the tip of the iceberg. During the past four years, 400,000 more children and 300,000 more pensioners were pushed into poverty in the UK. These are the worst figures for 20 years. But as May’s policies and PMQs performance show, she has no plan to lead Britain out of it.

Perhaps the two greatest catastrophes of May’s year have been the general election and Brexit.

May began the election with a double-digit lead in the polls and a press universally hostile to her opponent. She should have walked it. Instead, the Conservative leader failed to even approximate a human being; like telling a poverty-stricken nurse that she wouldn’t pay her a living wage because there was no ‘magic money tree’:

And yet, when she looked set to lose power, May shook £1bn out of that non-existent tree to win a shaky alliance with the DUP.

These are just the most high-level questions, not the devilsome details.

Hell in a handcart

May threatened voters, saying that if they didn’t support her in the election, they would end up with a ‘coalition of chaos’. This is the one promise she delivered on this year. The UK economy is at a near standstill. Poverty levels are soaring. And thanks to her party’s trashing of the welfare system, record levels of people are forced to use food banks to eat.

In foreign policy, things are no better. Our shambolic exit from the EU and May’s sycophantic relationship with Donald Trump are damaging the UK’s position on the global stage. As are May’s continued arming of Saudi Arabia to carry out its daily massacres in Yemen and her steadfast support for Apartheid Israel.

This is a time when Britain doesn’t just need a Prime Minister, it needs a leader. It needs someone who can look at this world in transition, and chart Britain’s course. Finland and Canada are testing Universal Basic Income, which could transform their welfare states to fit the 21st century. New Zealand has elected a 37-year-old woman Prime Minister who has branded capitalism a “blatant failure”. And ingenuity is happening at home too. Labour, the SNP and the Green Party are all offering sustained and articulate challenges to the status quo. Together with practical and inspiring possibilities for the future. Meanwhile, May and the Conservatives are as stagnant as the economy they preside over.

Calamity and callous inhumanity; these are the central tenets of Mayism. And in a rapidly changing world, that’s just not good enough.

Correction: This article was updated at 17:35 on 21 December to make clear that the Wandsworth mother featured in this article has both an autistic son and a 10-month-old baby.

– Join a political party or campaign group in your area.