The government just gave a top job to a man neck-deep in Carillion shares and pensions. It stinks. [OPINION] - Canary Workers’ Co-op 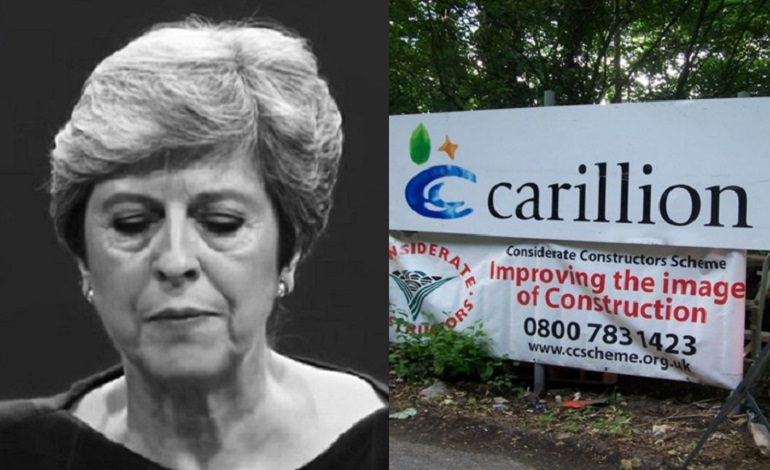 On Tuesday 16 January, the government announced a permanent appointment at the Department for Business, Energy and Industrial Strategy (BEIS). And in the same week that Carillion collapsed, it decided to give this top job to a man whose other employer has over 1.3 million shares in Carillion and runs one of its pension schemes. And it stinks.

Business Secretary Greg Clark has announced that Sir John Kingman has been made the permanent Chair of UK Research and Innovation (UKRI). He was previously the interim chair. Clark said of the appointment:

Since May 2016 when Sir John Kingman was appointed the interim Chair, he has been central to the formation of UKRI. As we work to establish this new organisation, Sir John has worked tirelessly to develop UKRI’s strategy and approach.

Kingman will be in charge of a £6bn budget. His role also includes implementing the government’s industrial strategy and ‘boosting‘ research and development post-Brexit.

But outside of government, where Kingman previously worked in various Treasury roles, he is also Chair of insurance giant Legal and General (L&G). L&G is classed as a “major” shareholder in Carillion, owning 1,371,990 shares. And it is also in charge of a Carillion pension fund.

A BEIS spokesperson told The Canary:

The recruitment for UKRI Chair was a fair and open competition run by the Department in accordance with the Governance Code for Public Appointments published by the Cabinet Office.

There is no suggestion that L&G or Kingman have done anything wrong. Kingman’s appointment, though, demonstrates the ‘revolving door’ between big business and government. And it’s one that is always open, no matter what happens.

But the fact that the media doesn’t even bat an eyelid at these kinds of appointments anymore shows how normalised the blurring of the lines between big business and government has become.

Kingman has, in his career, gone from being a senior civil servant looking after public money to working in private companies making profit from public money, and then back to the civil service again. And in our supposedly ‘democratic’ system of power, this is OK.

It’s not the first time the government has appointed a leading figure from big business into the heart of government recently. As The Canary reported in November last year, it made Sir John Parker Lead non-Executive Director of the Cabinet Office. Parker worked on the privatisation of two industries for Margaret Thatcher and is Chair of Laing O’Rourke, another government contractor.

And this may not be the end of the Kingman story. Because L&G also manages [pdf] one of the pension funds of Interserve and is a major shareholder. Interserve is another government contractor reportedly in trouble.

But for the Conservative government, it’s business as usual: putting private profit before public good and allowing individuals with interests in profit to be in charge of taxpayers’ money. We need to change the system, and quickly.