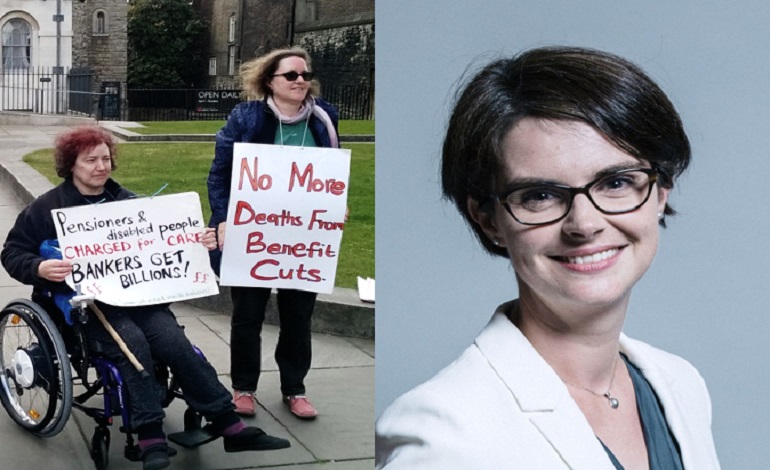 Norfolk Constabulary has charged a disabled man with threatening behaviour. It comes after an incident where he allegedly referred to Conservative MP Chloe Smith as a “fucking little Nazi”.

Mick Hardy, 63 and from Norwich, allegedly made the comment at the Norwich Pride Parade 2017, where Smith was giving a speech to the crowd. Hardy is a member of Disabled People Against Cuts (DPAC), which describes him as a “disability rights campaigner”. As The Eastern Daily Press reported, Hardy lives with “arthritis and mobility problems, as well as stress and anxiety”.

Smith was elected MP for Norwich North in 2009, and has held various positions in government. In 2013, Smith wore a blindfold and travelled on a bus to try and understand the challenges faced by disabled people when using public transport.

Meanwhile, as The Canary previously reported, on 24 January the European Committee of Social Rights (part of the Council of Europe) released a critical report of the UK government. The committee found that the government had breached its obligations under the European Social Charter in two areas: Article 12, the right to social security; and Article 3, the right to safe and healthy working conditions.

It specifically said regarding Article 12 that many welfare benefits – including Employment and Support Allowance (ESA) and Jobseeker’s Allowance (JSA) – were “manifestly inadequate”. That is, the government is not giving people enough money to live on and leaving them in poverty. The committee was also critical of the Department for Work and Pensions’ (DWP) benefit sanctions regime.

The CPS and police said…

The Canary contacted both the Crown Prosecution Service (CPS) and Norfolk Constabulary for comment on Hardy’s case. A CPS spokesperson said:

This case was charged by the police who have now sent us an electronic file. We will review the case in advance of the first appearance at Norwich Magistrates’ Court…

And a Norfolk Constabulary spokesperson said:

A 63 year old from Norwich was sent a postal requisition on 10/1/2018 for ‘Using threatening/abusive/insulting words/behaviour to cause harassment/alarm/distress’.

The requisition relates to an incident which happened on 29 July 2017, during Norwich City Pride, where a man has been verbally abusive towards a speaker at the event.

Hardy will make his first appearance at Norwich Magistrates’ Court on Friday 9 February.

– Write to your MP, asking them to support the European committee’s findings.

Featured image via The Canary and Chris McAndrew/Wikimedia