'Sucking the humanity out of the NHS': a doctor nails the Tories to the wall [VIDEO] - The Canary 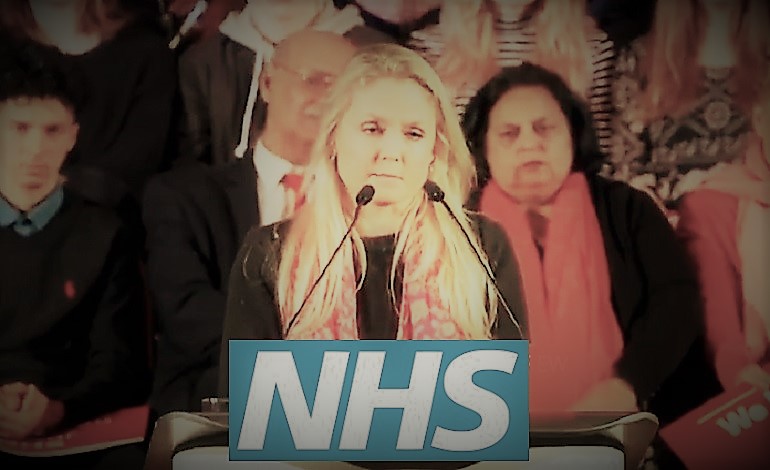 A prominent doctor’s speech about the NHS crisis has summed up the state of our health service under the Conservatives: that the government has [2:13] “sucked the humanity” out of it.

Dr Lauren Gavaghan is a front-line consultant psychiatrist. And at a recent Labour Party rally for the NHS, she gave a candid and moving account of why it is such an important institution.

“Extremes of life and death”

Gavaghan began by saying [0:17] what many NHS staff must feel: that witnessing moments of “extremes of life and death” is “what we do”. She described [0:37] how, in her 10 years as a front line doctor:

I have been privileged… to be the first to pass a new-born baby to his mum. I have also been there in the silence of the early hours to listen to the last beat of a beautiful old man’s heart.

A memory of the skin stretched white over a mother’s knuckles, as she hears for the first time her daughter talk about how she was raped. And the million creases appearing on a man’s face as he finds out his sister jumped onto the tracks, though survived.

It is these details which often get lost in the politics of the NHS. But it’s also these details, Gavaghan says [1:09], that “become part of our tapestry as doctors”.

These memories represent the humanity of the NHS. And it is this humanity that Gavaghan believes [2:13] is being “sucked out” of it.

She blames the current NHS crisis firmly on the Conservative government. She says [1:37] it is “failing” to keep “our health service running”; and that it has pushed the NHS “into crisis”.

Gavaghan says [2:25] the reality of these figures means:

People are dying on trolleys in hospital corridors, in England, in 2018.

She concludes by partly quoting [3:01] Martin Luther King. His original words in 1966 were:

Of all the forms of inequality, injustice in health is the most shocking and the most inhuman because it often results in physical death.

Gavaghan says [3:10] we must “not forget this”. But she didn’t mention the next part of Luther King’s speech. He said:

I see no alternative to direct action and creative nonviolence to raise the conscience of the nation.

And that is as true in 2018 as it was in 1966. So if you want to help fight for the NHS and the doctors like Gavaghan who work in it, there’s something you can do.

…so march for her

On Saturday 3 February, you can join in the demonstration organised by Health Campaigns Together (HCT) and the People’s Assembly. It is in response to the “winter crisis” the NHS is facing and begins at 12pm on Gower Street in London. Because as Gavaghan said [3:26] in her speech, we must:

…do everything we possibly can to fight for the NHS. She’s worth it. And in her 70th year, she deserves it.

This article was updated at 12:40pm on Monday 29 January to reflect that Gavaghan has been a doctor for 10 years, not seven as previously stated.