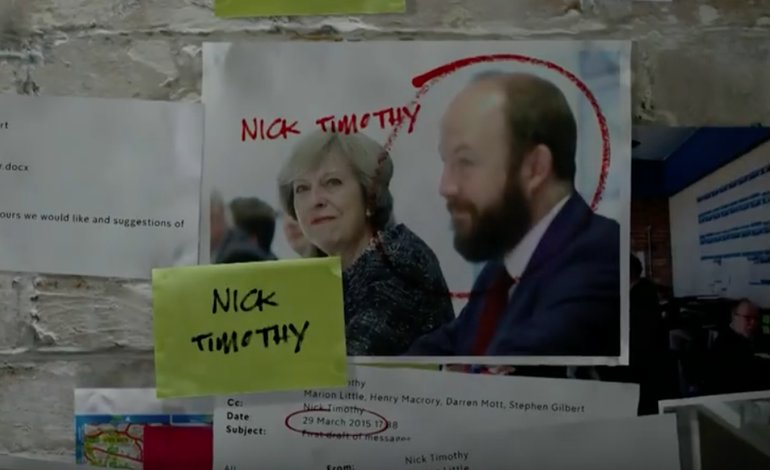 Last June, Theresa May was set for a landslide election victory. In the end, she barely held on after losing her majority to a historic swing for Labour. Speaking at an event by the Resolution Foundation  thinktank in London on Monday 29 January, the man who oversaw the loss admitted why.

Nick Timothy resigned in the wake of May’s catastrophic election result. And he’s since been hovering about like the Ghost of Christmas Past. But at this event, he made a point so simple it remains a mystery why Number 10 refuses to acknowledge it: voters have had it with austerity. And unless Theresa May and her party can come up with some new ideas, it’s only a matter of time until they get the boot.

He told the event:

The country is tired of austerity and public services are starting to feel the strain a little bit.

Any candidate who fought in the election campaign would say that school spending was one of the big issues.

I think it is clear that while the NHS needs reform it also needs more money. And I don’t think many people think the defence budget is sustainable.

For these reasons and for other reasons such as investment in infrastructure and things that improve productivity, there is a strong argument that fiscal policy needs to change.

The intervention from Timothy comes just days after another by Boris Johnson. The Foreign Secretary called on Theresa May to inject an additional £5bn a year into the NHS post-Brexit.

Conservatives are late to the party when it comes to debunking austerity. All opposition parties have rejected the nonsense economics of ideological austerity. Bank of England Governor Mark Carney has slammed austerity economics across the Eurozone. And the International Monetary Fund (IMF) has repeatedly warned the UK government that austerity does more harm than good. Ultimately, the Conservatives have used ideological austerity as a fig-leaf; to privatise public services, and divert public spending to corporate rather than human welfare. By the time of David Cameron’s sudden departure, he had privatised more public assets than any prime minister in UK history. The results were astronomical rises in homelessness, poverty, and food bank use – together with crisis-level issues in the NHS. With the May government offering no other option, it’s up to the public to make change happen at the ballot box.

– Join a political party or campaign which inspires you.