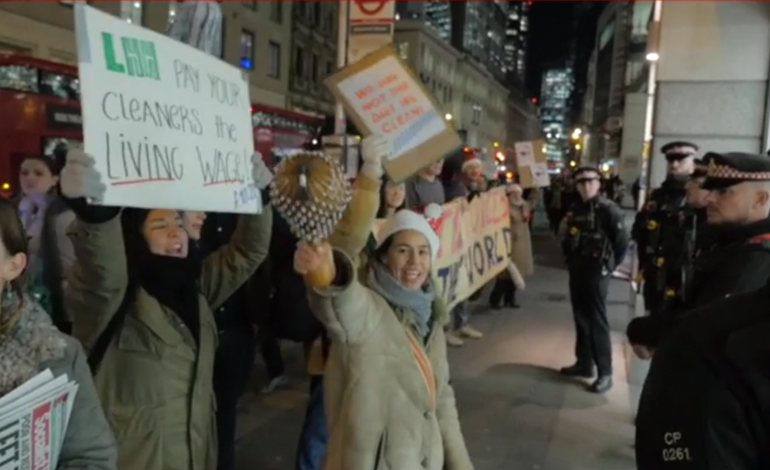 Migrant cleaners at multinational Lee Hecht Harrison (LHH) have won their fight for better wages. They achieved a “whopping 30% increase” after a campaign that began on 25 November 2017. And it’s just the latest in a string of victories for their union, United Voices of the World (UVW).

UVW announced on 25 November 2017 that it would be balloting for strike action against employers City Central Cleaning (CCC) after it refused to pay five cleaners the £10.20p/h London Living Wage. And CCC had allegedly “already threatened [UVW] members with the sack if they strike”.

The grassroots union claims the “rich city firm” LHH saw a 132% increase in its revenue during 2016. But it continued contracting the five cleaners, all from Latin America, via CCC at the “poverty wage” of £7.50p/h.

Members of UVW returned a 100% vote for strike action in January 2018. And on 14 December the union organised a solidarity protest outside LHH’s London offices, which was “heavily and aggressively” policed. And after the protest the cleaners began their shift passing through [1:46] the same line of officers that had been pushing them away moments before.

But three weeks of strike action was called off after LHH agreed to new contracts that would raise the cleaners up to the London Living Wage. UVW described this as a “sensational victory”:

Once again a courageous group of migrant workers have shown that despite having no previous experience in unions and without big campaign funds to back them that simply by getting organised, taking collective action and bringing the fight to the bosses that they can win the decent wages and respect they deserve.

This is the latest in a string of victories for UVW including:

Having just won the LHH campaign, UVW is now working on improved working conditions for cleaners at the Ministry of Justice.

UVW is member-led and works mostly with migrant cleaners in London. It aims to not only achieve material gains such as better wages. But also to foster respect for, and dignity in, some of the UK’s most overlooked workers. And its successes are already inspirational.

– Donate to UVW, which relies on “modest” subscriptions and donations to operate.

– Read about ‘new unionism’ organisations such as UVW and Independent Workers Union of Great Britain.

– Check out more articles about UVW and migrant rights at The Canary.