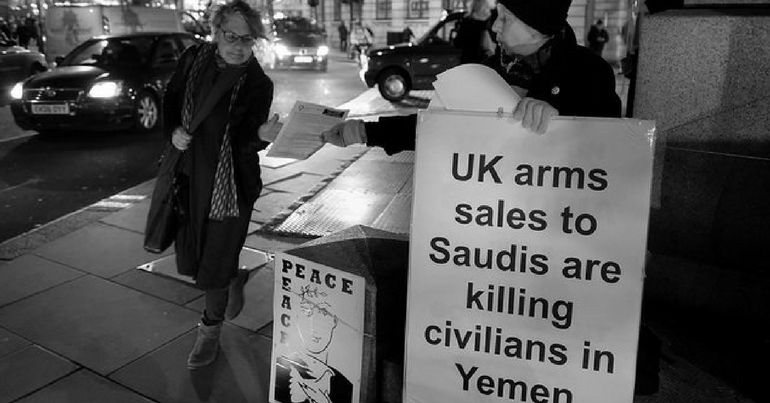 Organisers of ‘England’s biggest event in 2018’ are coming under attack for accepting sponsorship from BAE Systems, the world’s third largest weapons manufacturer.

The Great Exhibition of the North 2018 is a “free, summer-long celebration of the North of England’s pioneering spirit”, with venues around Newcastle and Gateshead. But it has run into trouble over accepting sponsorship from BAE Systems, who claim it is a ‘premier partner’ for the event.

Singer Nadine Shah has already announced that she is pulling out of the event:

I will no longer be playing the @getnorth2018 festival now that I have discovered BAE Systems are a sponsor. I am disgusted to hear of their involvement and refuse to be in any way associated with them. I encourage all artists involved to follow suit ✌🏾❤️

The Commoners Choir from Leeds has also pulled out, saying:

We felt completely unhappy being represented alongside a corporation with a track record in supplying weaponry to countries waging war on their own people and boasting appalling human rights records.

And folk group The Unthanks have said they’re “prepared to pull out if nothing changes”.

We are concerned that BAE Systems is using an arts festival to masquerade as ‘family friendly’ while selling weapons to Saudi Arabia, a regime bombing schools and hospitals in Yemen.

5,000 children killed or injured in Yemen

BAE Systems has been widely criticised for selling weapons to Saudi Arabia for use in their war against Yemen. UNICEF reported in December 2017 that more than 5,000 children have been killed or injured in Yemen since the conflict began in March 2015. Cholera and acute diarrhoea have affected over a million people and over seven million people are at risk of famine.

There is no dispute that Typhoon and Tornado aircraft sold by BAE Systems to Saudi Arabia have been deployed on combat missions in the war on Yemen. Yet the government continues to support these sales. Former defence secretary Michael Fallon even said in October 2017 that criticism of Saudi Arabia is “not helpful” when the government is trying to encourage the regime to buy more weapons.

Sponsorship of high-profile events is an important part of BAE Systems’ public relations programme. Last year it sponsored the New Scientist Live festival. It sponsored a major bike race, a rowing race, and  – perhaps somewhat ironically – a “walking with the wounded” event. The company even sponsors a secondary school. It’s all part of normalising the selling of weapons.

But there may be trouble ahead for the Great Exhibition of the North if they don’t say no to BAE Systems. Campaigners have already set up a spoof Twitter account complete with promotional videos showing attack aircraft blowing various things up. Artists are pulling out. A petition is gathering momentum. A PR coup for BAE Systems may turn out to be a PR disaster for the Great Exhibition of the North.

– Attend a protest on March 7/8 against the visit of Saudi Crown Prince Mohammad bin Salman.

– Support people on trial on March 7/8 for trying to stop the DSEI arms fair.