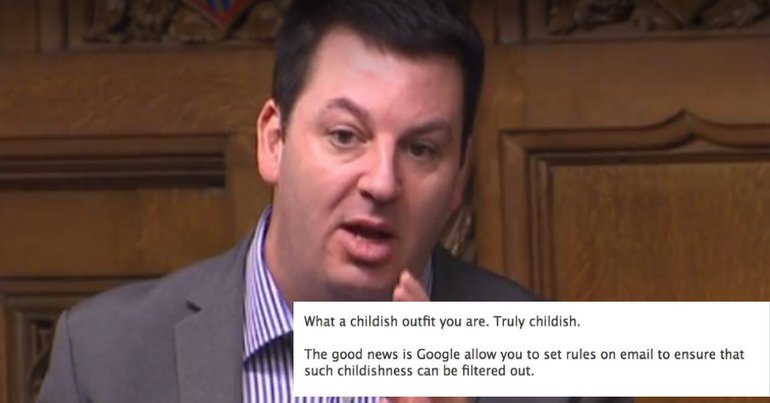 Conservative MP Andrew Percy appears to have breached the Conservative Party code of conduct with a “puerile” email to an independent journalist. Percy replied to a media enquiry with an attack on the journalist and the outlet he represents. 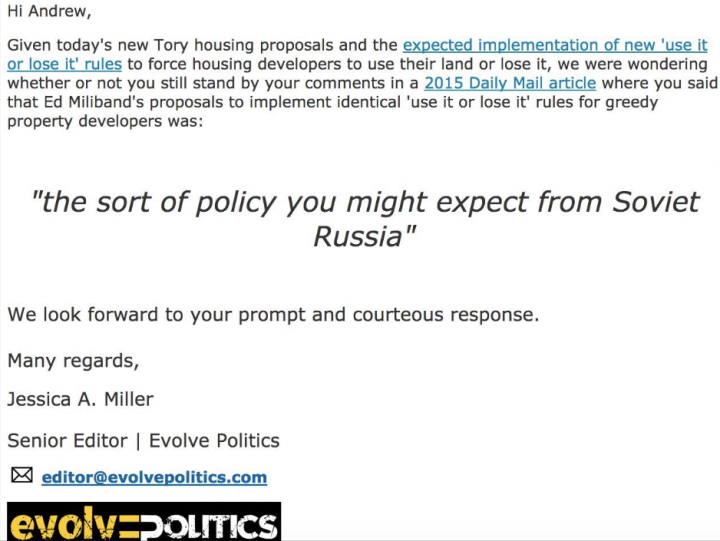 Turner recently gained accreditation to the parliamentary press lobby. It is normal procedure for journalists in the lobby to approach parliamentarians for background or quotes about newsworthy issues. Providing the right of reply to subjects of a story is basic good journalism. The subject can decline to comment, or provide comment. Percy responded with this: 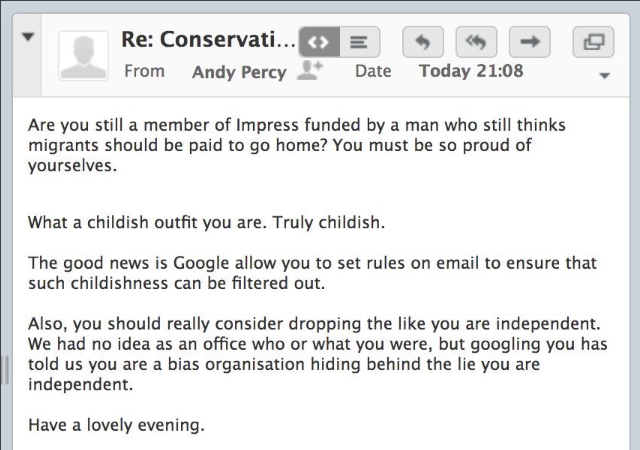 Asked for his view on Percy’s behaviour, Turner told The Canary:

We just found it to be immensely discourteous. We are new members of the lobby, an established outlet with a fast-growing audience – to be so childish in his response to a perfectly valid line of questioning says more about Andrew Percy than it says about Evolve Politics. Such puerile responses won’t stop us from reporting Tory hypocrisy. In fact, it’ll only help our cause.

The Code of Conduct

The Conservative Party’s own Code of Conduct sets out clear rules about the behaviour of party representatives. Just days ago, party chairman Brandon Lewis launched the ‘Respect Pledge’, reaffirming the party’s commitment to respectful behaviour in public life.

Today I launched the @Conservatives #RespectPledge ahead of this year’s local elections.

Democracy has always been robust and oppositional but a line is crossed when this becomes abuse and intimidation. pic.twitter.com/bWcrDEfWkB

Percy appears to have contravened the ‘Respect Pledge’ and Section 7 of the Code of Conduct, which reads:

Leadership – Holders of public office should exhibit these principles in their own behaviour.

Percy’s behaviour also stands in stark contrast to his public comments on being respectful in public life. The Conservative MP for Brigg and Goole left Twitter in 2016, claiming it had become “aggressive and nasty”. He has also made repeated accusations against members of the Labour Party for breaching codes of conduct; most recently, conflating anti-semitism and criticism of Israel in the Daily Mail.

This article is ridiculous. Conflating criticism of Israel with anti-semitism only helps real anti-semites. Shame on @DailyMailUK and Andrew Percy MP.https://t.co/Oct7vg8zK9

A few days ago, Percy asked Theresa May to stand up for Brexit voters in the North of England. He claimed they were being “patronised and insulted as too thick, too northern, or too racist.”

Tory MP Andrew Percy asks the Prime Minister to stand up for voters in the North, who throughout the Brexit process have been “patronised and insulted as too thick, too Northern, or too ‘racist’” pic.twitter.com/nFfn9Ge47h

The contrast between Percy’s public statements on respect in public life and his private treatment of an independent journalist provoked widespread reaction. The incident is also a reminder of the need for new media voices in Westminster. As Evolve‘s Turner told The Canary:

Having a site like Evolve Politics in the lobby is a much needed breath of fresh air, no matter what Tory MPs say. The media landscape is changing in favour of digital outlets that rely on social media for their audience – if dinosaurs like Percy want to live in the past and insult us, then it shows that they haven’t learned the lesson of the 2017 general election, or how sites like Evolve Politics and The Canary shaped the conversation during that campaign.

This is not OK

This incident raises questions about Andrew Percy’s character and conduct. But it also highlights the issue of hostility to new media among public figures. It is not for the state, or its representatives in parliament, to decide who is a journalist and who is not. The National Union of Journalists (NUJ) accredits journalists by issuing a press pass. Press pass holders (whatever their outlet) carry all the authority, responsibility and rights of a journalist under the law. It is not OK for MPs to ignore or, worse, abuse independent journalists because they can’t guarantee the cosy relations experienced with the establishment media.

The Canary put these concerns to the Conservative Party, and a spokesperson responded:

We do not consider this a breach of the pledge or the code of conduct.

If you feel differently, see below for ways you can get involved.

– If any individuals wish to make a formal complaint against elected representatives or officers of the Conservative Party, they should email [email protected] Alternatively, they can call the confidential hotline on 020 7984 8050.