Andrew Neil weighs in on antisemitism, forgetting he once paid six figures to a holocaust denier - The Canary 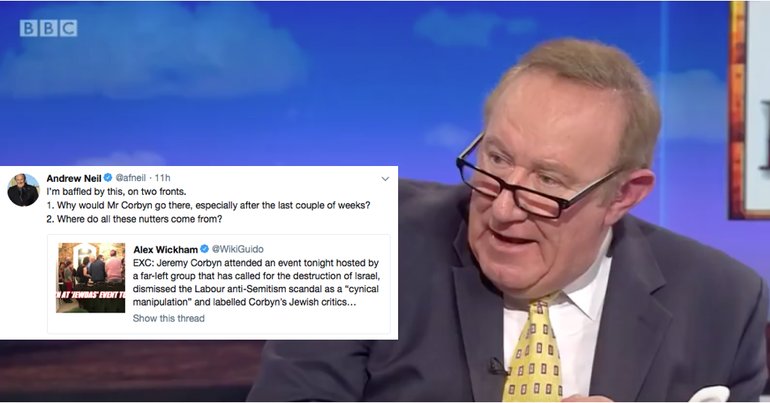 BBC host Andrew Neil has weighed in on the antisemitism row. But he seems to have forgotten that he once paid a six-figure sum to a holocaust denier while editor of The Sunday Times.

Andrew Neil has had a lot to say on the supposedly ‘endemic’ antisemitism within the Labour Party.

"That, dear viewer, is anti-Semitism. At its deadliest and most depraved. Which is how it always ends up. Which is why it can't be tolerated. Those still in doubt need to educate themselves. Fast." @afneil opening #bbctw pic.twitter.com/MFi7pYorkB

Any and every condemnation of antisemitism is welcome. But sadly, unless you’re against racism by anyone to anyone, you’re not an anti-racist – you’re an opportunist. This opportunism is highlighted by the reaction of a toxic coalition of the Labour right, the right, and the far right of UK politics over the weekend. When Labour leader Jeremy Corbyn sat down for Passover Seder with left-wing Jewish group Jewdas, the far-right Guido Fawkes blog ran a hit piece. The antisemitic rant stripped Jewdas members of their Jewish identity, for the sake of attacking Corbyn. It was truly foul.

EXC: Jeremy Corbyn attended an event tonight hosted by a far-left group that has called for the destruction of Israel, dismissed the Labour anti-Semitism scandal as a “cynical manipulation” and labelled Corbyn’s Jewish critics “non-Jews”https://t.co/WE32BZIqY9 pic.twitter.com/SxAUQhD5kt

Jews on the UK left were quick to point out the antisemitic nature of the attack:

Galling to see non-Jewish Labour MPs weigh in and decide who is a good Jew and who isn't. This is not the way to solve antisemitism. This is not how we make the Jewish community feel welcome in our party. https://t.co/34Zq0NDE9A

Why are you suggesting there is no such thing as Good Jews and Bad Jews? Why divide Jewish people into such group? What you are saying would be considered by a lot of my friends to be Anti-Semitic. https://t.co/1y3HDSWvo0

No it isn't. They are just Jews who disagree with other Jews. Which means: Jews. https://t.co/N2D3uxdbzq

Despite this, the Labour right joined the attack, with Labour MP Angela Smith unable even to spell ‘Seder’.

Corbyn’s attendance at the Jewdas seber reads as a blatant dismissal of the case made for tackling anti-Semitism in Labour. #EnoughisEnough

The entire establishment media, including the BBC, leapt on the Guido story as fact. And so did a host of pundits who have seized on the issue in efforts to oust Corbyn. This means Britain’s liberal commentariat acted as cavalry in a charge against the left led by Guido Fawkes. Guido. Fawkes.

By driving traffic to the Guido Fawkes website the BBC are exposing license payers to the worst kind of anti-Semitism, racism and misogyny guilty of funding far right wing hate. It's intolerable. They should get their own reporters to do the work.

Only in the UK, and only when it comes to the eagerness of Blairites to sleazily exploit anything, no matter how sensitive (e.g. cynically invoking anti-semitism as a political weapon), can *having dinner with a group of Jews* be deemed further proof of one's anti-semitism.

Neil bought into the Guido smear too, promoting and legitimising the hit job.

I’m baffled by this, on two fronts.
1. Why would Mr Corbyn go there, especially after the last couple of weeks?
2. Where do all these nutters come from? https://t.co/CaL78Sp963

But he may live to regret it. Because people in glass houses should lay off the stone throwing.

Andrew Neil is the host of the BBC‘s Daily Politics and Sunday Politics shows. He is also chairman of Press Holdings – a company registered in the tax haven of Jersey. The company (owned by the billionaire Barclay brothers) owns a number of conservative media outlets, such as The Telegraph and The Spectator. Neil was formerly a political adviser for the Conservative Party, and an executive editor of Fox News in the US. So when it comes to fake news, Neil is a veteran.

He was also once editor of the The Sunday Times. While there, he reportedly paid a six-figure sum to infamous holocaust denier David Irving. The Hitler apologist denies the basic facts of the holocaust, stating that “the gas chambers were a figment of British propaganda”. And when Neil was criticised over the decision, he argued that Irving was only an “amateur Nazi”.

OpenDemocracy editor Adam Ramsay and others were quick to point out Neil’s hypocrisy on the issue:

What I'm baffled by is why someone who once paid a 'six figure sum' to holocaust denier David Irvine to write about Nazis in the Sunday Times would feel he has any authority in this debate. https://t.co/XuqLSz4GFZ

You once hired David Irving, a Holocaust denier. You have no moral authority on this whatsoever, and should apologise, in full, for a) hiring a Nazi apologist and b) denouncing a Jewish group you don't like as "nutters". https://t.co/4Zb5FlRoXA

I'm baffled as to why @afneil knowingly employed the holocaust denying, anti Semite Nazi David Irving. Then defended that appointment by stating that he (Irving) was only "an amateur Nazi"https://t.co/NefMtmpf6k

It’s difficult to overstate the wrongness of journalists and politicians declaring who is a ‘good Jew’ and who is a ‘bad Jew’. This despicable situation is only exacerbated by privileged non-Jews playing Chief Rabbi, laying down the law to Jewish people. Especially when their support of the Jewish community is contingent upon political allegiances. Enough really is enough.