It's election day in England, and you know what that means - Canary 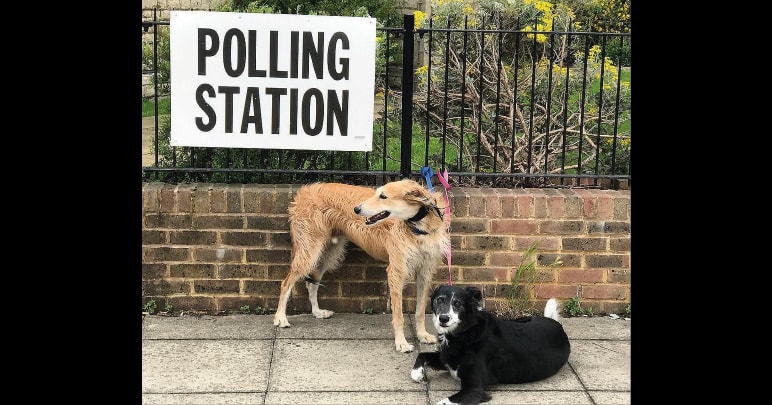 There are several important reasons to vote in the 2018 local elections, especially if you’re one of the many people who’ve been failed by Conservative government and councils.

One reason to go out and vote may not be the most important, but it is the most adorable. Because once again, people are taking their dogs out to polling stations.

Dogs are affable creatures who find joy in many things. Sometimes it’s the simple things – like treats or balls. Other times, it’s the giddy thrill of democracy in action:

It's that time of year again!
We love seeing all your #dogsatpollingstations – especially if their owners are voting Labour!

Regardless of how you vote today just ensure you do. Plus you will see all those gorgeous dogs at the polling stations! #dogsatpollingstations pic.twitter.com/wTBv83Ul9h

Jeremy Corbyn was so happy to see dogs at his local polling station that he – wait – that’s not Jeremy Corbyn:

It’s not just Labour, however. Look at this sausage dog. Look how happy he is to have that Tory rosette pinned to his breast. Just look. JUST LOOK AT HIS LITTLE EYES:

Other dogs are helping their owners draw attention to important issues like Women Against State Pension Inequality (WASPI).

It isn’t just dogs, either. There’s a whole menagerie of animals showing up.

Cats may pretend to be disinterested in the affairs of humanity, but their attraction to polling stations shows otherwise:

This next one reminds us that, sometimes, it’s the slow and steady challenger who wins over their flash opponent:

While #dogsatpollingstations is trending let's all remember when my dad took my tortoise to vote just for the banter pic.twitter.com/3VNTfOymaZ

Lots of animals are voting, and we’re all ‘ferret’:

Voting is so important it’s even brought animals together:

Get out and vote!

Don’t spend too long looking at these precious animals, however. If elections are being held in your area, you need to get out and vote! Dogs like Hugo are watching to see that you do:

– Check if and where you can vote.