Peak hypocrisy from the police, as the Home Office goes Breaking Bad - Canary 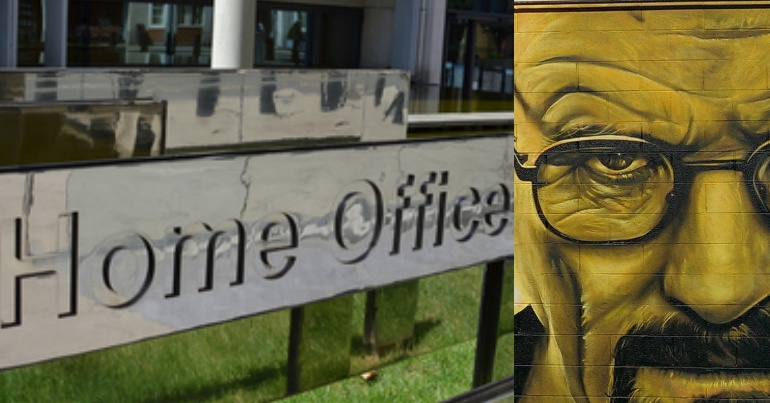 According to the Mirror, crystal meth found at the Home Office was “the third such incident in six months”. The Home Office holds responsibility for tackling drug use in the UK. But “Scotland Yard decided not to mount a full investigation – with Government officials unable to say why.”

It looks like the Home Office has gone Breaking Bad.

The Mirror said that a “stash” of the class A drug methamphetamine – better known as crystal meth – was found on 3 May. A police spokesperson told the Mirror:

A small quantity of suspected class A drugs were found discarded in a communal area.

This report emerged on the same day that home secretary Sajid Javid tweeted a picture of himself with a sniffer dog called Trigger at Heathrow Airport.

The lack of police investigation has prompted many questions on social media. Some drew attention to cuts in policing:

'Class A drugs' found at Home Office headquarters – https://t.co/1IjKnjCtvr if Home Office ministers and staff have really been smoking crystal meth it might explain the paranoid nature of their migration policy

We cant keep drugs out of high security prisons or even the home office. But we still hear endless BS about 'securing our borders' to prevent drugs entering the country. Laughable https://t.co/Ny3mVHXE30

Fatal drug poisonings are on the rise. As the Independent reported in 2017:

The Office for National Statistics (ONS) said 3,744 people – 2,572 men and 1,172 women – were fatally poisoned by both legal and illegal drugs in England and Wales in 2016, 70 more than the previous year and the highest number since comparable statistics began in 1993.

However, linked to this are rising levels of social deprivation. According to Drugwise, deprivation can include “poverty, inadequate housing, poor education and lack of job or social opportunities”. It also says:

Equally, according to a report [pdf, p10] from the Centre for Social Justice, drugs “have been a problem in prison for decades”. And it says [pdf, p10]:

Politicians have regularly identified this and promised change, without success. The data shows that…

But under this government, funding for drug and alcohol support services has been slashed by 15.5% since 2013. Councils have lost £105m to provide vital services.

Theresa May said calls for a public debate on what could be done differently were "unnecessary".

There were "promising signs" that progress was being made and the "drugs landscape had been transformed".

2018 – Crystal Meth being used in the Home Office👌

Although this case highlights some incredibly serious issues, many have found the irony of meth at the Home Office hilarious:

For many, the recent behaviour of Tory MPs was up for ridicule:

Signs of Meth use:

Outbursts , mood swings, and can become violent, unpredictable, and paranoid.

Very talkative, talking in circles and not making any sense.

I'm sure it's just a massive coincidence that Crystal Meth was found in the Home Office around the time Amber Rudd was having a massive meltdown… pic.twitter.com/oLGSJIYxlc

Cult TV show Breaking Bad raised awareness of crystal meth. One thing it did brilliantly was to expose the ways that power and money can corrupt. So some have taken to Twitter suggesting that Walter White – the show’s central protagonist – should now step in as home secretary.

Aspects of this story have an ironic comedy value. But the core of it isn’t funny. When police find class A drugs in the government department responsible for drug policy, we need to ask what’s going on. The lack of police investigation raises some very serious questions. Why are civil servants and ministers subject to different policing laws? This is yet another example of the entrenched hypocrisy that epitomises this Tory government.