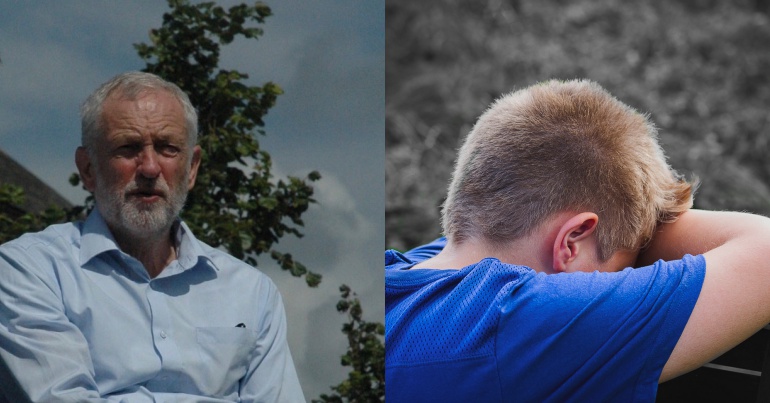 Smears against Jeremy Corbyn have dominated the UK media for weeks. Yet away from these headlines, Tory cuts have continued to affect and destroy children’s lives. Rising numbers of UK children now live in poverty and don’t have access to secure housing or food – let alone healthy food. Children are going hungry. And as term begins, some schools can’t open every day because of financial cuts.

Food on the table?

A new report from the independent thinktank Food Foundation found that 3.7 million children in the UK live in households that earn less than £15,860. As a result, these families are “unable to afford a healthy diet”. The report relates to official government nutritional guidelines.

The Government’s measurement of household income highlights the fact that millions of families in the UK cannot afford to eat in line with the Government’s own dietary guidance.

In fact, the report found that access to a healthy diet was out of reach for half of all UK households. And the poorest 20% would need to spend 42% of their income (after housing) to afford a healthy diet. As the Food Foundation noted, these findings draw attention to widening inequality in the UK. It also shows that the poorest children are most at risk of potential obesity, diabetes and malnutrition.

Deaths from malnutrition in the UK are rising. In 2017, the Food Foundation also reported that:

The UK is facing a rising tide of malnutrition that is damaging our children… one in 10 children are living with adults who report experiencing severe food insecurity.

This summer the Trussell Trust also made a call for more food donations during the school holidays. This is because many families rely on free school meals during term time. In 2017, about 900,000 children accessed free school meals. But as the Children’s Society reported, under new government proposals a “million children in poverty in England will miss out on free school meals”.

And for those families relying on free school meals, there’s more bad news.

Ongoing education cuts mean that some schools simply can’t afford to open. Some now have a 4.5 day week. As the Mirror reported:

At least 24 schools… have ditched lessons on Friday afternoons. And more than 200 other heads have warned they are considering doing the same.

One head teacher explained that “a shorter week was the only way to save £35,000 – the equivalent of a teacher’s salary”. And this is poignant because many schools have been placed in an impossible situation.

Schools need to fund 1% of the recent teachers’ pay award. But some schools simply don’t have the money to do this. As Paul Whiteman, general secretary of the National Association for Head Teachers told Tes:

Many struggling schools will have to make heartbreaking decisions to find the 1 per cent, forced into an impossible choice between paying their staff the amounts recommended and making yet more damaging cuts in the middle of a recruitment and retention crisis.

Schools are already at breaking point as a result of the crisis caused by consistent Conservative education cuts. They still need to find an extra £3bn of savings by 2019/20. And according to the School Cuts website, primary schools face an average cut of £45,400, which rises to £185,200 for secondary schools.

As teachers do their best to cope with these cuts, they also see the impact of rising poverty for the children that they teach on a daily basis.

According to the Child Poverty Action Group (CPAG), more than one in four UK children now live in poverty. In some areas, this accounts for over half the children. As CPAG states:

When kids grow up poor they miss out – and so do the rest of us. They miss out on the things most children take for granted: warm clothes, school trips, having friends over for tea. They do less well at school and earn less as adults.

The situation in the UK is so bad that in November the UN is heading to investigate poverty in the UK. One area of investigation is the “extent of child poverty in the United Kingdom, and how has it evolved over the last decade”.

Access to food and education are two of the most basic human rights – yet in the UK, Conservatives are decimating those rights for children. It’s time to stop smearing Corbyn – since a Corbyn-led Labour government is the best chance to change this situation – and unite to draw attention to these vicious Conservative cuts. These children are our future, and we need to enact change now to protect them.

– The UN has called for anyone “working on issues related to poverty and human rights” to provide written statements ahead of its visit. Spread the word!