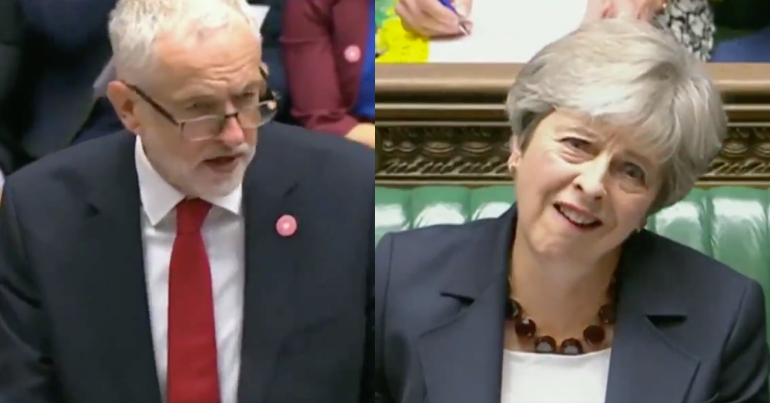 On 5 September, Prime Minister’s Questions (PMQs) returned after the summer break. And Jeremy Corbyn used the opportunity to deliver the mother of all one-liners.

She can’t keep dancing around all the issues.

Get down and boogie

Corbyn was, of course, referring to the excruciating footage of May dancing during her trip to Africa:

Dancing around the issues …. ?#PMQs pic.twitter.com/BkpC3h0XTr

A zinger from Corbyn: May “can’t keep dancing round all the issues”. #PMQs

It was clear from May’s answers on Brexit that she still has no coherent plan for Brexit. In an earlier question, Corbyn asked:

The prime minister says no deal is better than a bad deal. The chancellor says no deal would cause a catastrophic collapse of our economy. And yesterday, the Brexit secretary waded in to say there were countervailing opportunities to a no-deal Brexit. Could the prime minister enlighten us as to what these countervailing opportunities actually are?”

The answer appears to be she can’t. May responded:

This government is working to ensure that whatever the outcome of the negotiations, this… country makes a success of coming out of the European Union – we see that global Britain and a brighter future for people here in this country.

#PMQs
Jeremy Corbyn: "A majority of people might have voted to leave, but they expected the negotiations to be handled competently, and they certainly are not!"
"I say to the PM, she can't keep dancing around all the issues."
"Panasonic are already relocating out of this country" pic.twitter.com/E24bKc0o1y

A majority of people might have voted to leave. But they expected the negotiations to be handled competently and they certainly are not.

He also refused to rule out calling for a second referendum on the terms of the UK’s proposed exit from Europe. This led people to speculate that the Labour Party might be moving to support a People’s Vote:

Most notable #PMQs line from Corbyn: "A majority of people voted Leave but they expected the negotiations to be handled competently" – potential case for a second referendum. https://t.co/3NxmCaPM0o

Corbyn has never ruled out a second referendum. This would be a good month to announce his support for one

With the official date for leaving the EU just over six months away, Corbyn is right. May has not handled the negotiations competently and is still unable to provide a coherent and meaningful strategy of what Brexit will actually mean.

The country needs more than just soundbites. It needs the government to present a clear plan. That plan then needs putting to the people. We need to have a final say on whether we want the actual deal or the idea of Brexit based on lies and election fraud presented during the initial referendum. Then we can truly say whether the Brexit “negotiated” by May is really the will of the people.

– Support the campaign for a People’s Vote.