A major report just let the DWP off the hook. A plague on both their houses. - Canary 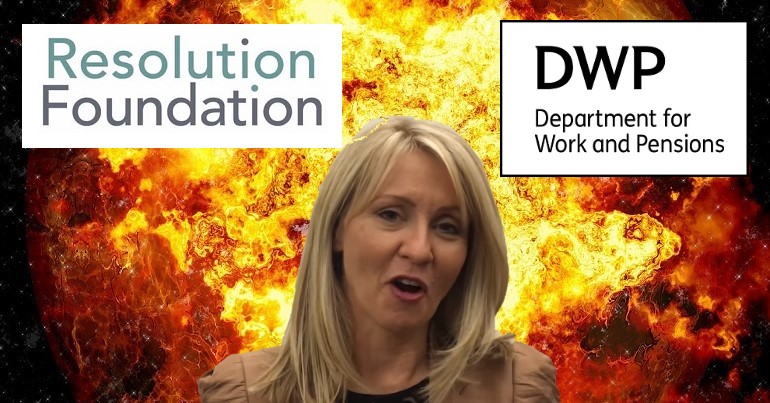 A major new report into the Department for Work and Pensions (DWP) has been widely greeted by simpering platitudes from much of the left-wing press and political class. But scratch the surface, and you’ll find that the analysis of Universal Credit has essentially given the DWP a free ride to continue with this most noxious of policies.

The DWP: saved by the bell

The think tank Resolution Foundation has released a report into Universal Credit (which it calls UC), calling for it to be “fixed”. But the only sound coming from many hand-wringing people was cooing. Because on my social media, the report was fairly well received.

Herein lies the overarching problem with UC. Many people, including the Resolution Foundation, believe that it can be fixed. ‘We agree with it in principle!’ squeal Labour politicians, ‘but it really needs to be paused and fixed!’. For want of a better phrase, polishing a turd never gets you anywhere. And UC is filled with the most noxious shit going.

The report is mostly about ‘managed migration’ – the process of moving existing claimants onto UC. It says that overall:

The implementation of UC has been a prolonged and often painful process… And the remaining gain – that of a significant boost to take-up – could be at risk of being lost if further problems continue to dog the implementation process. However, recent signs suggest that the roll-out of UC may just finally be going to something approximating the plan… If DWP can both maintain an open dialogue, ensure transitional protection truly protects the most vulnerable and secure reinvestment in UC to boost its generosity and incentives it could just be the moment the reform is put firmly on the path to success.

I could copy and paste into this article much of the report’s other criticisms of the benefit. But it’s pointless when the overall message is one of fixing UC. Luckily, the hand-wringers and air-through-teeth-suckers at the Guardian have done it for me. So you can read its analysis here. The overall gist is that unless UC is fixed, low-income families will suffer financial hardship.

The fact that Resolution Foundation and others think UC can be fixed shows how far in the sand their heads are buried.

A history of nastiness

As I previously documented, UC is designed to cause misery and hardship. Right back to its conception in 2009, the idea was to push as many people as possible into whatever work there was going. This was because its architects believed that people’s reliance on welfare, and therefore their poverty, was their own fault. So, these stupid poor people needed their behaviour modifying and a lot of nudging to get them to conform, and off benefits. For those who didn’t conform, a life on UC beckoned. And this is just the ‘working poor’. If you want to know what it does to sick and disabled people, read Disabled People Against Cuts (DPAC)’s analysis.

Overall, the Resolution Foundation claims that:

Trust in the new system has faltered… [there’s]… a real risk that people are put off claiming at all on the assumption that the new system is a minefield in which everyone loses out.

For God’s sake. The DWP wants people to be put off claiming. One of the main drivers of UC was to reduce the welfare bill. The only way working people can escape claiming it, due to it encompassing tax credits as well as DWP benefits, is to take more and more work. Which in 2018 Britain is often low-paid and precarious. And which is another point the Resolution Foundation misses.

It says that if Universal Credit worked properly:

This is not going to happen. By its very nature, UC is designed to make sure working people are only on it for a short period of time. An estimated 2.8 million people are in the low-paid, unpredictable-hours world of the “gig economy”. If these people claim UC, and if the DWP says they’re not working enough, they could be sanctioned until they find more work or earn more. This is intentionally designed to force people to take whatever work comes along. It’s ‘race-to-the-bottom’ mentality.

This is the biggest point politicians, pundits and thinktanks miss. UC is not fixable. It’s the ‘Trojan Horse’ to usher in a brave, new, dystopian world where all poor people are on a race to the bottom. And it’s designed to split the poorest in society into two groups.

These are the ‘deserving poor’; people who drag themselves out of destitution just enough so the state won’t support them. But it will pat them on the head and say ‘well done’ anyway. And shoo them off into the gig economy and in-work poverty.

Then there’s the ‘undeserving poor’; sick, disabled and unemployed people and feckless workers – who deserve nothing more than to drown in a tidal wave of brown envelopes and sanctions; because ultimately, they’re not productive to society.

Stop and scrap it

As I previously wrote:

Its architects designed it to marginalise whole sections of society; to create a dystopian world where an underclass of people exists on its fringes. Couple this with the government cutting public services left, right and centre; homelessness rocketing; social housing decimated –  and we are seeing a nightmarish vision, once reserved for science fiction, becoming a reality.

If you can fix this, then I look forward to reading your report on how you can mend a broken ideology and mindset. Because that’s what UC is really about. And until such time as someone does do a report like that, everyone else, including the Resolution Foundation, should be saying “stop and scrap” it. Not fix it. Nothing less will do.