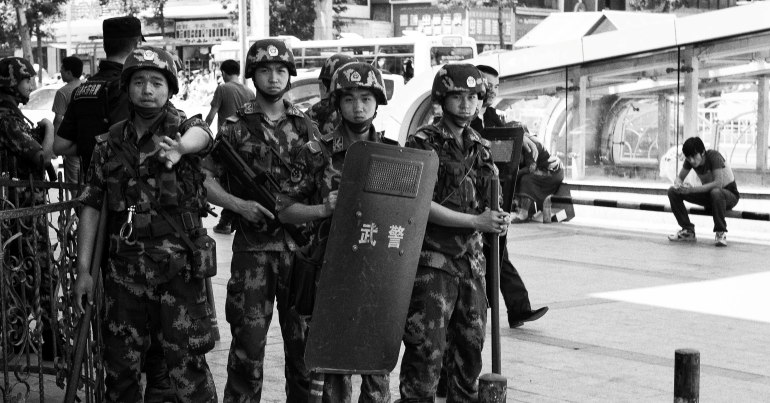 Recent weeks have seen considerable reporting on the persecution of Uyghurs, an ethnic minority from China’s far western Xinjiang province. While the sheer scale of the reported persecution is alarming, China’s strict censorship practices make it difficult to verify information.

Some have expressed particularly cynical opinions on Twitter, suggesting the reports are either exaggerated or the situation is being misrepresented:

Uyghur woman: wow i love beer, i feel like drinking some

random White american dude: *jumps out of bushes* OMG HOW COULD CHINA FORCE YOU TO SAY SUCH A THING?!?!

random White american dude: fear not, AMERICA will free you from your oppression!

Having pored over article after article (after article) on the alleged crisis currently faced by China’s Uyghur population, two things are clear. Firstly, despite the difficulties with obtaining firsthand information from China, the reports appear accurate. Several articles feature testimony from those who were arrested. Others include experiences of reporters in China, or share the UN’s assessment of the issue.

Secondly, it’s clear that the “People’s War on Terror“, and an alleged threat of Uyghur separatism, are being used to justify what is effectively the ethnic cleansing and cultural genocide of the Uyghur people.

Despite the reports that have appeared in Western media being generally credible, the cynicism is understandable. Western media bias against communist China is always glaringly obvious, and the sheer scale of the reported persecution beggars belief. So The Canary spoke to Dr Enver Tohti, an Uyghur activist living in the UK, to better understand what is driving the Chinese government’s actions. Tohti has spent many years researching, lecturing on, and protesting against the treatment of the Uyghur population by the Chinese government.

Tohti describes the reality for the Uyghur and other persecuted groups as “hell”:

If you speak out (against what is happening), you will die. If you remain silent, you’re dying anyway.

He said targeted groups can “do no right” in the eyes of Chinese authorities; a sentiment demonstrated in this account from a Guardian article:

Tohti described how belonging to an educated and well-known family afforded him a certain degree of protection, however:

Asked if anything he had read on the subject was inaccurate, Tohti said the camps were not new. He described how, around fifty years ago, his father had been sent to such a camp on two occasions. However, where previously detainees were held short-term, now both the length of detention as well as the number of people being arrested is much, much larger:

Based on my experience, things might be ten times worse than what is reported.

“Chinesisation” and the Chinese Communist Party

In answer to “why” the Chinese government is cracking down on minorities, Tohti offered the following explanation:

The Chinese Communist Party (CCP) was born to chaos and grows under tyranny. So in order to maintain power, this party will maintain chaos in the country. Look at the history – there were so many political moments, like the Cultural Revolution, the Great Leap Forward Moment, where they killed so many from their opposition. They need to make the country unstable so they can justify their rule. Before, they used to fight political opposition, but now Chinese people are fed up (of opposing them). So what is the CCP going to do, because they need an enemy to fight? Then came September 11, and Islam became an easy target. And Uyghur people are Muslim so they became a very convenient tool for the government to create an enemy to fight.

Tohti described the history of what is referred to as the “Chinesisation” of minorities, a push to accept the dominant Han Chinese culture and language and reject minority languages, cultures and beliefs:

The persecution of the Uyghur people has nothing to do with Islam. It appears that they are being persecuted because of Islam but that is not the case.

He explained how after 1911, when the Qing dynasty, which was Mongolian, was overthrown, the Han Chinese tried to make their culture dominant everywhere:

However, Xinjiang is the place where Chinesisation has gone terribly wrong. They tried to convert minorities to their culture but the minorities didn’t bite. They wanted to keep their own language, their own culture, and the Chinese didn’t like that.

It’s not just Muslims being targeted

In an article for NY Times, James Millward writes:

The C.C.P…  seems to be redefining Chinese identity in the image of the majority Han — its version, perhaps, of the nativism that appears to be sweeping other parts of the world. With ethnic difference itself now defined as a threat to the Chinese state, local leaders … feel empowered to target Uighurs and their culture wholesale.

But Tohti was keen to point out that, unlike the claims of many articles, it is not just Muslims, and not just Uyghurs, who are being targeted by the Chinese government:

They are not only targeting Uyghurs or even minorities. For example, people in Shanghai felt they have been mistreated, and now there is a Shanghai independence movement that is also being targeted. Similarly Taiwan is a very convenient target. When they (the government) have a problem, they point to Taiwan and try to divert attention (from themselves).

It is clear that this is not just about Islamophobia or the rights of Muslims, but about the rights of anyone the Chinese government perceives as a threat.

An article for Associated Press claims (without mentioning a source) that “radical Muslim Uighurs have killed hundreds in recent years”. However, Tohti believes the government has manufactured and exaggerated the threat from so-called radical Islam to scapegoat Muslims. He shared stories of police in Inner China protecting Uyghurs who commit petty crime; a practice which served to foment hatred towards Uyghurs among the majority. Moreover, from the many accounts of arrests of Uyghurs, it is clear that arrests are not limited to extremists.

As for the separatist threat, this, too, appears to have been greatly exaggerated to justify the crackdown on minorities. Tohti describes Uyghurs as a diverse and disorganised group of people:

Uyghur people today are a disunited group. We don’t have so-called Uyghur nationalism or national identity. The government is threatened by Uyghur separatism, but this separatism doesn’t exist because Uyghurs themselves don’t trust each other.

As for the 2009 Urumqi riots, cited often in articles as justification for the Chinese government’s actions, Tohti’s research has produced an interesting theory. Through sources he is unable to disclose, one of them a British Oxbridge scholar, Tohti made a revealing discovery – a TV advertisement broadcast in Southern Xinjiang ten days prior to the Urumqi riots. The advertisement announced a state-sponsored project in Urumqi that required labourers from the South and invited people to apply. Workers were invited to Urumqi with the promise of their return fare being covered; however, no such project actually existed. Tohti says:

Michael Dillon at Durham University posed the question: ‘Why did a large number of people from the South gather in Urumqi at one time?’ This advertisement explains it… 30,000 people came to Urumqi, but they had no money because they were coming to work. When they found out there is no work there, they would have turned to anger very quickly. And you don’t need a big flame to spark anger.

Asked what we can do to help the situation, Tohti’s outlook is bleak. And he has good reason to be pessimistic. He said the UK is unwilling to damage trade relations with China, and the same goes for many other countries.

The Chinese delegation at a UN panel in August flat-out denied the targeting of minorities. It claimed the camps in question were intended for training and rehabilitation. Despite credible reports on the detainment of one million Uyghurs, the UN has taken no action against China. The United States Congressional-Executive Commission on China described the situation as “the largest mass incarceration of a minority population in the world today.” A letter from the committee to the US Ambassador to China, submitted back in April 2018, yielded no results.

It may seem insignificant, but spreading awareness about the situation might be the best, and maybe the only available option. “It is important to let people know what is happening”, Tohti says. Sharing news about the oppression of China’s minorities, and calling on our government to hold China to account, is the least we can do.

– Write to your MP, asking them to hold the Chinese government to account.