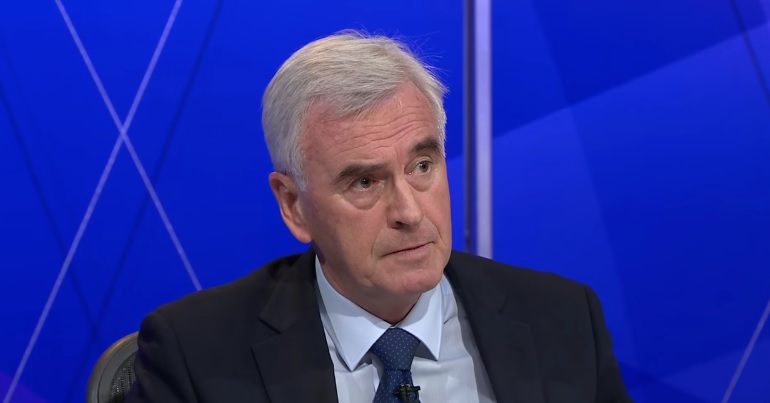 Shadow chancellor John McDonnell went on BBC Politics Live on 6 September. During the programme, he responded to the recent appearance of posters in London that say “Israel is a racist endeavour”.

McDonnell also spoke about Jeremy Corbyn’s so-called ‘racist Israel‘ clause. He supports the Labour leader on this. And so he should. Because his contradictory reaction to the posters shows how desperately needed Corbyn’s clause is.

As the London Palestine Action network pointed out, the posters appeared at various bus stops around London:

Created by ethnic cleansing; maintained by ethnic exclusion. Israel is a #racistendeavour pic.twitter.com/xhJKL9jh9M

Whether calling Israel racist amounts to antisemitism is a much discussed topic in the UK currently. Because the International Holocaust Remembrance Alliance (IHRA) argues that “claiming that the existence of a State of Israel is a racist endeavour” is an example of antisemitism. So it included this in a list of examples accompanying its antisemitism definition.

Until recently, however, the Labour Party didn’t accept that this amounted to antisemitism. Its National Executive Committee (NEC) decided on 4 September to change that. The posters emerged in the aftermath of this decision.

So, during Politics Live, the BBC host asked McDonnell whether the poster’s message is an “OK thing to say”. He responded:

No, it’s not the right thing to say. It’s against the examples that we set out yesterday, linked to the IHRA definitions.

McDonnell explained further why he believed the posters were not acceptable:

It is not at all antisemitic to be able to describe a state as racist… But it is antisemitic if you’re saying having a state of Israel is racist.

But McDonnell is not alone in opposition to the posters within his party. London mayor Sadiq Khan has also condemned them. His spokesperson said:

These offensive adverts are not authorised and are acts of vandalism which Transport for London and its advertising partner takes extremely seriously.

McDonnell’s condemnation of the posters on Politics Live, however, essentially put him at odds with himself. Because, on and off the BBC show, the shadow chancellor has supported a clarification Corbyn put forward for his party’s antisemitism code of conduct. In this clarification, the Labour leader asserted that people should be allowed to hold Israel to the same standards and international laws as other countries. He also argued that describing “Israel, its policies or the circumstances around its foundation as racist” doesn’t amount to antisemitism.

So, McDonnell’s support for this clarification contradicts his opposition to the posters. Because the posters appear to do nothing more than describe “Israel, its policies or the circumstances around its foundation as racist”. In answer to the BBC host’s question, this is an “okay thing to say”. At least, it is according to Corbyn’s clarification.

Rights denied based entirely on ethnicity. Israel is a #racistendeavour pic.twitter.com/iYqcsu6PyI

McDonnell’s contradictory position appears to stem from the presumption that the posters’ creator meant ‘a state of Israel’ rather than ‘the state of Israel’. This is exactly why critics of the IHRA definition argue against it. Because its conflation of criticism of Israel with antisemitism, combined with its rather woolly wording, leaves a lot open to interpretation.

This can severely hamper people’s ability to call Israel’s crimes against the Palestinians what they really are: racism. That’s what the large-scale ethnic cleansing of Palestinians in 1948 by militants amounted to. It’s also an apt label for the recent decision by Israel’s Supreme Court to allow the authorities to raze an entire Palestinian village to make way for Israeli settlers. The passing of Israel’s nation state law, which gives Jewish people an “exclusive” right to self-determination in the country, is another racist case in point.

McDonnell’s interview was excruciating for this very reason. Less than 48 hours after his party adopted the full IHRA text, it showed what a perilous situation it’s created for the party in its ability to stand up for Palestinian rights. It’s now walking a tightrope on this issue.

Many opponents of Corbyn and his team will surely be hoping it’s only a matter of time until they fall off.