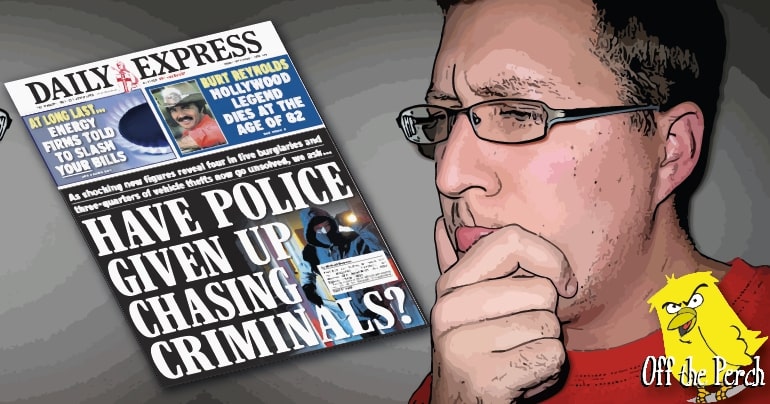 In future, society will hopefully be a Star Trek style utopia, where the only crime is spandex uniforms. Society right now isn’t becoming more even, though; it’s becoming less even. As such, crime is rising.

Rather than managing police numbers in line with the crime explosion they’ve ignited, the Tories have opted to cut police numbers.

The Express has previously encouraged police cuts – claiming that the force was squandering their budget on outreach programmes like:

Due to this lack of funding – and the increase in poverty-driven felonies – police are less able to combat crime than ever. When this was pointed out to the editor of the Express, he raged:

So they’re blackmailing us for handouts like the hard-left, anarcho-pigs they are! Well, I’m afraid we don’t give in to terrorists! If anything, we should give them less money!

As our unpopular government has little option but to do whatever the tabloids say, Theresa May has adopted this position. In fact, she’s taken it further. From now on, police officers will be charged to pursue criminals at a rate of £150 per arrest.

As you can imagine, our lazy boys in blue are refusing to cough up. But you know who to blame when crime increases. Whoever the tabloids tell you to.