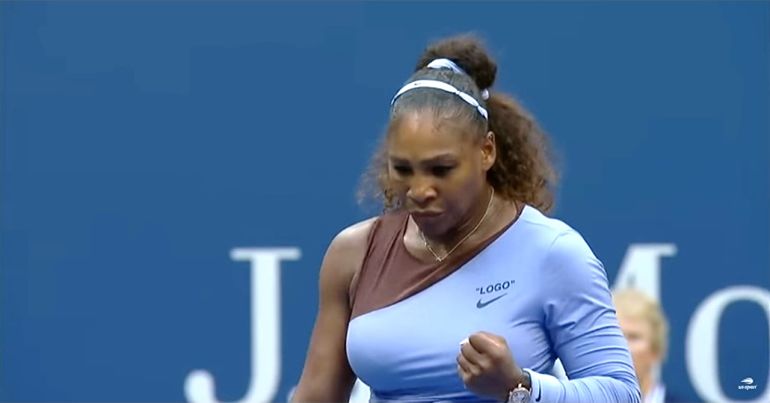 Tennis legend Serena Williams has come under fire for her behaviour during the 2018 US Open Women’s final. Williams was initially given a penalty for “coaching”. The umpire, Carlos Ramos, spotted her coach passing instructions during the game, which is against the rules in grand slam matches. When Williams reacted to the decision, Ramos decided to penalise her further, ultimately costing her the title.

But Williams’s fans are not happy, and the support for her has been overwhelming on Twitter.

Actress Anika Noni Rose pointed out how Williams has faced discrimination her entire career, for being black as well as a woman:

What hasn't changed is the way @SerenaWilliams had been policed and disrespected since the moment she stepped on the court as a kid decorated with beaded braids. #USOpen

Others expressed sympathy and said Williams’s outburst was understandable:

Watching #MorningJoe panel undercut #SerenaWilliams– do they not realize how deeply offended she must have been to be accused of cheating during a final, in front of the world? A champion athlete who has worked tirelessly to become a legend in her sport?

Many people called out the double standards involved in the decision, especially as numerous examples emerged of male tennis players with aggressive behaviour walking away without being penalised:

What Serena Williams was mentioning by saying men tennis players do and say worst things and nothing happens. She might have a point. pic.twitter.com/V9pDnwsRtN

In particular, there were several examples of the same umpire, Carlos Ramos, not penalising male players who had behaved in a similar manner to Williams:

Djokovic Gets Into Argument With Same Umpire Carlos Ramos at French Open, multiple violations did not result in docked point or game. https://t.co/qkZv2SNE7O

Another one of nick screaming at Carlos Ramos for a foot fault, no point or game penalty. https://t.co/0PwEmINGWB

Was the decision sexist?

Almost immediately, the issue of sexism was raised – many claimed the umpire’s decision was affected by the fact that Williams is a woman:

My thing is.. what happens when a sexist umpire goes off the rails? Who can step in when officiating becomes egregiously unprofessional? Why didn’t the referees overrule the ridiculous coaching violation? #usopen

Many people saying Serena Williams was justly punished. No. She was punished more harshly than a man, as male tennis players have admitted. There is unconscious bias at work here – some expect "better" behaviour from women & that's #EverydaySexism.

“I saw sexism, absolutely I did. It was sexism at play and it was bias because you had Ramos saying, "I've got this woman being incredibly assertive with me. That's not something I'm going to accept.” @ShivaniGopal1 on Serena Williams #TheDrum pic.twitter.com/zaPqm5Bc6a

Zerlina Maxwell: “It was an example of two women of color having what should have been an amazing moment for both of them, no matter who won or lost, and it was marred by a man’s choice” https://t.co/WaYFlviMIX

Sally Jenkins: Chair umpire Carlos Ramos "took what began as a minor infraction and turned it into one of the nastiest and most emotional controversies in the history of tennis, all because he couldn’t take a woman speaking sharply to him." https://t.co/z9JR31wfUt

The Women’s Tennis Association (WTA) has since confirmed it agrees with the assessment that the umpire’s decision was sexist.

More specifically though, people are calling the incident a classic example of misogynoir – the combination of misogyny and racism experienced by black women:

This thread includes examples of men *and* white women tennis players not being penalized.

Serena Williams & The Cost of Misogynoir?

‘Who amongst you wouldn’t be angry? Ah, but your commitment to seeing black women, especially this champion black woman, obedient and controllable means you’ll lie and say “it’s part of the sport.”’https://t.co/bqZrx1BVVy pic.twitter.com/1lc64QKfD2

Interestingly enough, the controversy sparked a debate around who is the Greatest Athlete of All Time. We’ll let you decide:

Let's end this argument, who's the greatest athlete of all time (GOAT).

Ultimately, Williams’s fans were here to celebrate the tennis queen and all her contributions to women’s equality:

.@serenawilliams You are THE epitome of grace and prowess!!! You are an inspiration to all of us. Your purpose to be a leader and a light is a gift to the world!! We love you and thank you for sharing your greatness and spirit ! Congratulations Queen!!! ??????????✨✨ pic.twitter.com/2DclKRe2Xr

#SerenaWilliams is stepping further into a divine assignment that’s much bigger than tennis. The sport was her launching pad. She’s rising as a champion for equality, equity and justice. This rising is the reason many are rejoicing over her loss at the #USOpen. March on, Serena. pic.twitter.com/abAa8LtHns

Williams’s response at a press conference after the match demonstrates her pride in her contributions:

Everyone should listen to this from Serena Williams. pic.twitter.com/TF03dhpq2P

A video tribute posted by Wiliams’s husband, Alexis Ohanian, has gone viral. It’s clear her fans are here to support her all the way:

She fought for her life, for our child, for recognition, for equal pay, for women’s rights. She never gives up.

I had this made for @serenawilliams last night after her match with some home videos from 1 year ago this week. Help me make sure she sees it!#iloveyouserena pic.twitter.com/OV6Zo1DBxZ

While losing the US Open final must have been frustrating for a seasoned champion like Williams, the winner Naomi Osaka is now the first athlete of Japanese descent to ever win a grand slam. And of course, this is only a bump in the road for Williams and she will no doubt bounce back in no time.