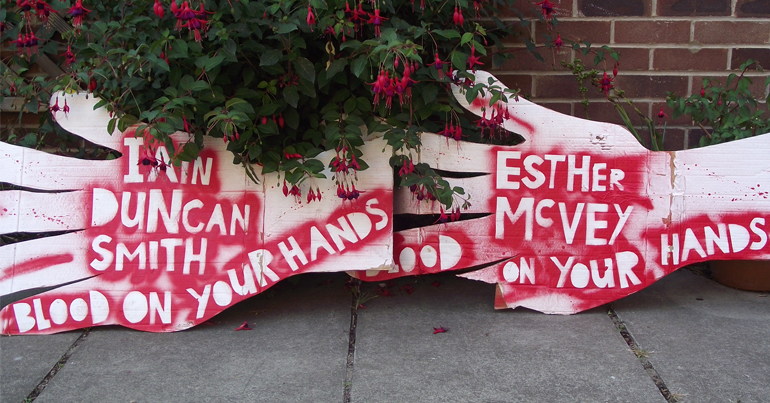 An activist from Norfolk has written a play that takes the Department for Work and Pensions (DWP) to task for its treatment of benefit claimants. Norwich Pride chose to censor the title from its 2017 programme. But that didn’t stop the artist from pursuing it, and now the local council has even been convinced to foot some of the bill.

A Very Queer Nazi Faust is performed at Norwich Arts Centre on 12 September. It’s described by the venue as an “experimental participatory performance”, and tickets are priced at £6.66. The play has only been performed to the public in full once before; in a tent at Norwich Pride 2017, when the title was censored from the event’s program. But the performance itself was a success, as the play’s writer, Vince Laws, tells The Canary:

We got a really good response. Got a great review as well – Norwich Radical did a review. So yeah, that kind of encouraged us.

A Very Queer Nazi Faust’s story was first fleshed out as a comic in 2006. Despite positive feedback, Laws lacked money to self-publish so it laid dormant until February 2017 – LGBT History Month. 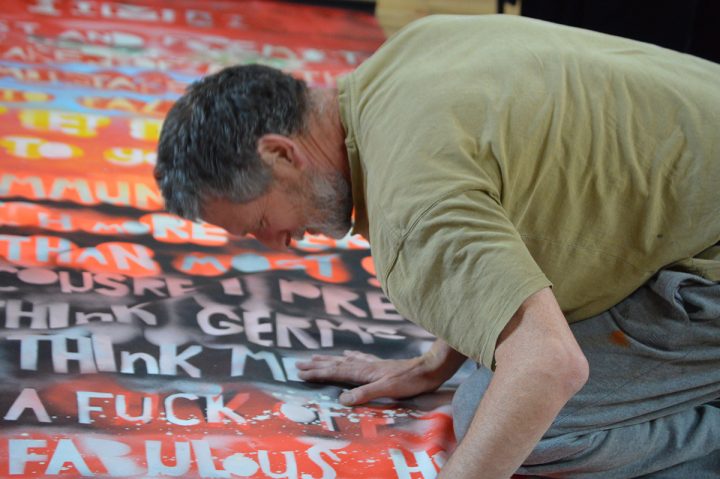 During this period Laws had also become increasingly political:

I am disabled. I deal with depression. I’m HIV positive. I live with anxiety. Some of my disabilities are because of the side effects of the medication I take. I’d been a sort of local campaigner for HIV, and the same with mental health.

Then I moved on to protesting more politically about the benefit system, which I’m on. I was campaigning in Norfolk in quite an isolated way really. I didn’t really know about all the other organisations that were doing it. It wasn’t until a bit later that I cottoned on to DPAC [Disabled People Against Cuts], and I now work with DPAC.

All of this came together in a play that sets out to ridicule the DWP for its treatment of benefits claimants.

Laws gave a brief introduction to the story:

John Faust is an HIV positive depressed poet in North Norfolk on benefits. He’s had a tough time. His benefits have been stopped without warning. The bailiffs are due to come and evict him. His dog’s dying because he can’t pay the last vet bill. His car needs a new clutch. On and on it goes.

So… he crawls up to Beeston Bump and throws himself off Norfolk’s highest peak. Taking with him his poetry manuscript called The Tragic True Life and Deserved Death of a Benefit Scrounger by Himself, John Faust. But Lucifer won’t let him drown because she loves it.

Following this, Faust’s life changes. A surreal and comic adventure ensues. It involves disabled protesters, Theresa May, Benny Hill music, eating poor people, and a space Pope. Yep. But comic relief underlines a serious message about the impact of the DWP on real peoples’ lives:

The backdrop to all of this is disability rights, the cuts, the welfare deaths. Particularly the DWP deaths. I’ve made a series of shrouds which I’m using as the set. I’m making sheets which are 6ft by 4ft, hemmed, and then I’m spray painting them with the names of different people who’ve died because of benefit cuts. I’m calling them the DWP Deaths Make Me Sick shrouds.

These sheets criss-cross the performance area. They’re a constant reminder that, beneath the comedy, the piece is a serious protest against what Laws sees as the deadly practices of the DWP. 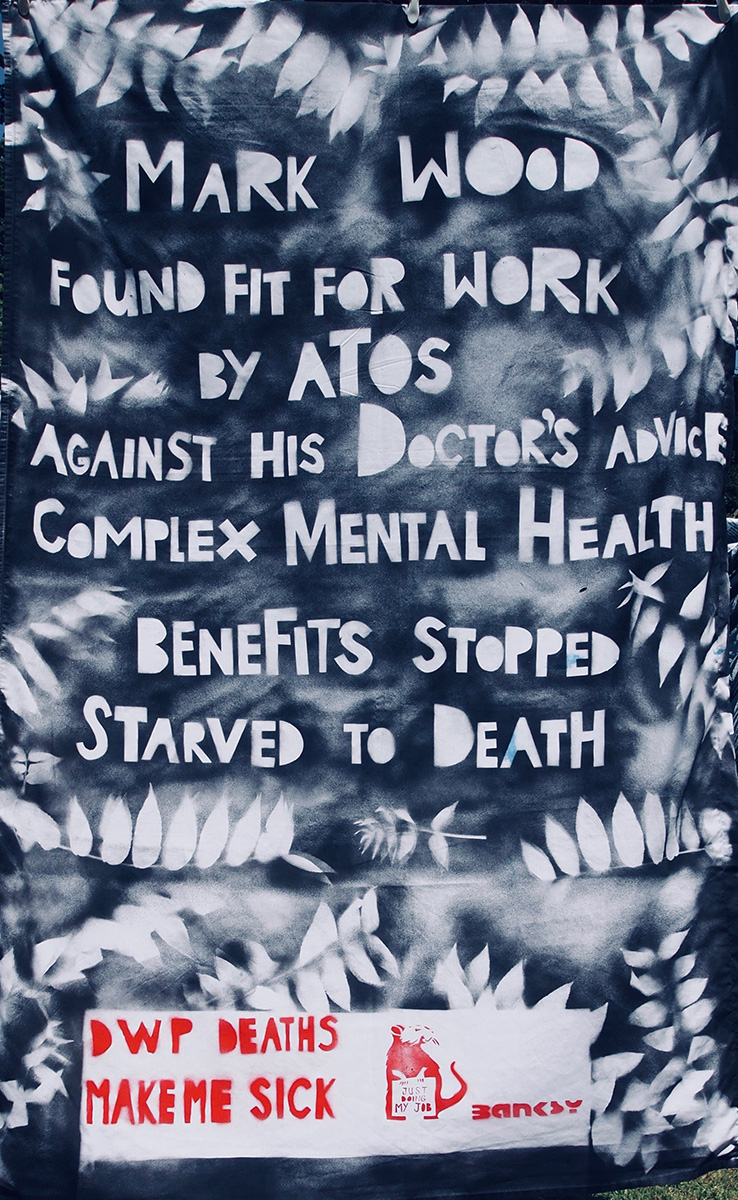 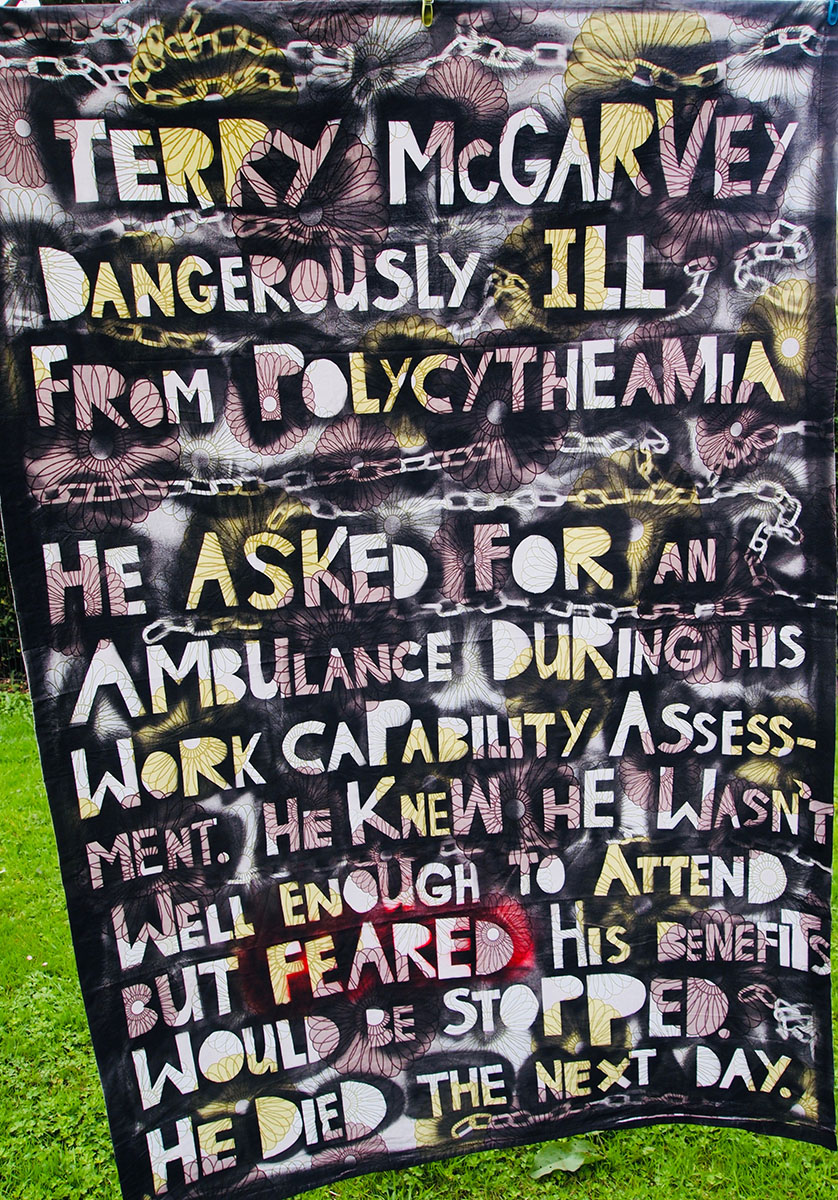 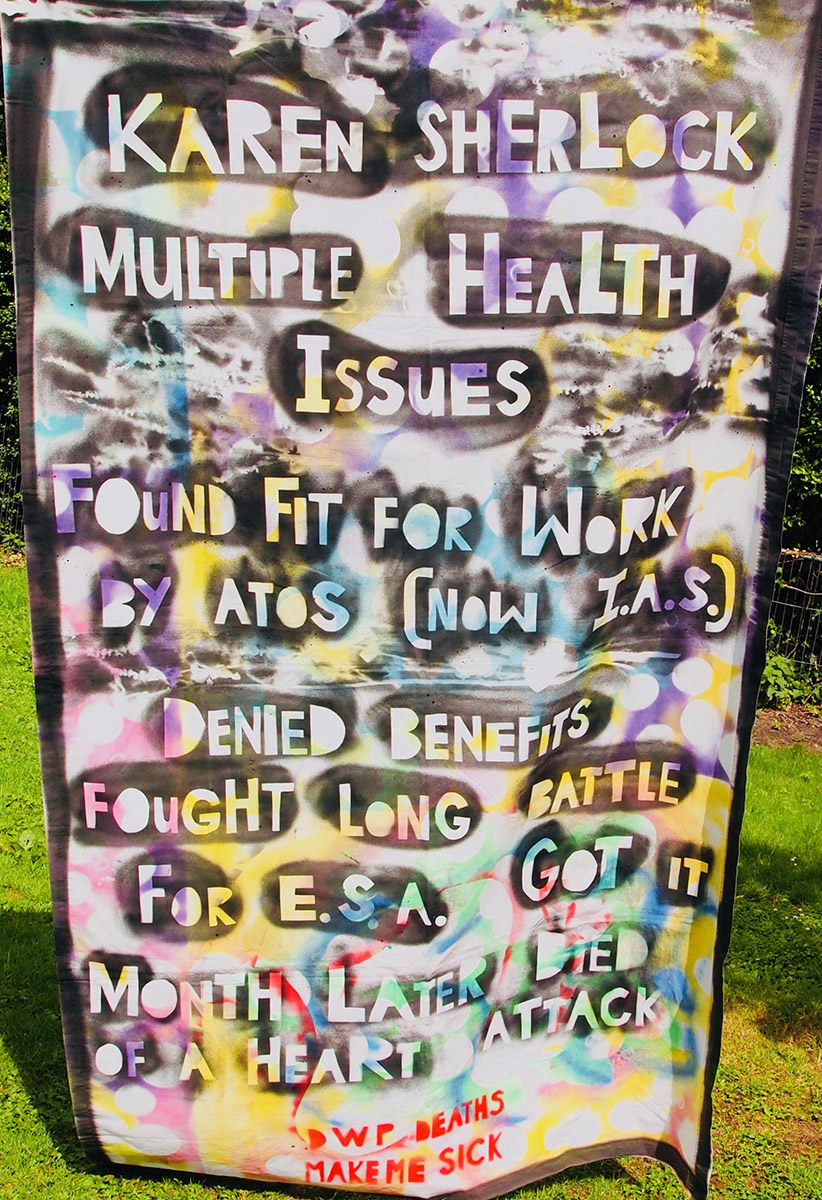 Laws has an unrestrained opinion of the DWP. He believes the department has “systematically slaughtered” claimants. And he points to a 2016 report by the UN that said there’s evidence of “grave and systematic violation of rights of people with disabilities” by the UK government.

Despite this report, as The Canary has frequently reported, the DWP continued along the same path. And Laws told The Canary he sees that as intentional:

I don’t know what else we have to do to make them stop doing the things that make people die at the end of the system. That’s really what my protest is all about. In 2016, I made a five-metre long banner called Dead People Don’t Claim. That is it exactly. I think people on benefits are being pushed to the very limits so there’s less of us to claim. … I don’t know how to get them to stop. So I kind of feel like my motto is carry on screaming and just keep shouting about it.

The protest goes beyond A Very Queer Nazi Faust, though. The Dead People Don’t Claim banner will go with DPAC to protest the next Tory conference. And they’ll likely be accompanied by the DWP Deaths Make Me Sick shrouds as a stark reminder of every benefit death caused by the policies of this government.

Norwich Pride blanked the title out of its 2017 program. And it’s completely absent from an 8 September article by local paper Eastern Daily Press. Laws told The Canary that it’s provocative but considerately so:

I did think about it for a long time and very carefully about the ‘Nazi’ word in particular. And then I read an article all about the Aktion T4 program in Germany. The first mass murder of civilian people was disabled children. First of all, in the press, they demonised the disabled with adverts saying what a burden they were and how much it cost to keep these people alive. Then they selected disabled children and sent them off for a special ‘cure’.

A few weeks later they ‘unfortunately’ died. … I am aware of the whole thing of othering and naming it a Nazi thing and therefore not a British thing, but A Very Queer British Faust didn’t have the same bite to it. … But for me the thing is, well we’re kind of living under the Nazis. We’ve got these death shrouds out and all the rest of it. What’s different? What are we waiting for before we make that connection, you know?

The gravity of the subject hasn’t prevented the cast and crew from enjoying themselves. Laws says they’ve become “a big family, The Faustians”. And it’s passion for both the creative and political sides of the performance that carried them through the early days of making it happen on “buttons”. 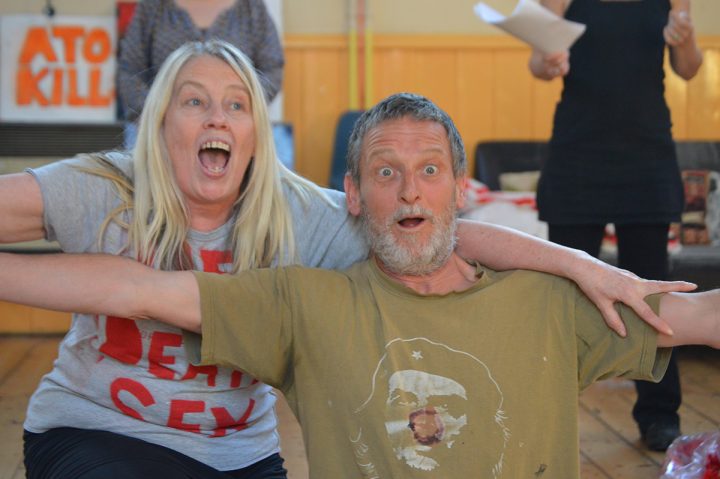 This year, A Very Queer Nazi Faust is being performed to launch Norfolk’s Disability Pride event. And Laws told The Canary that it’s secured funding this time around:

We’ve got, the wording they love is, ‘commissioned and supported by Unlimited with funding from the Spirit of 2012’. Then we’ve got support from the Arts Centre as well as DPAC. And we’ve also got support from Norfolk County Council.

I don’t think they know what they’ve supported.

But this funding has enabled the performance to be bigger and better than before. It’s now being performed at Norwich Arts Centre. And it’ll be live-streamed at Disability Arts Online’s Facebook page. So there’s no excuse not to watch it, whether in person or online.

– Get tickets for the play from the Norwich Arts Centre website. Or watch the play live-streamed on Disability Arts Online’s Facebook page.

– Read an in-depth interview with Laws about A Very Queer Nazi Faust at the Theatre Times.

– Check out The Canary’s long track record of holding the DWP to account.

Featured image and other images by Ann Nicholls, used with permission