Despite his abysmal record as a politician, the media keeps telling us Boris Johnson could be the next prime minister. The deputy editor of the Sunday Times has come up with the weakest argument for Johnson’s promotion yet – namely that we should… just give him a go?

Baxter begins by claiming that before his divorce scandal broke, Johnson was being painted as a “man of destiny” who was “humble but proud, ready to take back control, so to speak, of the nation’s fate”. That’s, err, this Boris Johnson, who recently handed out tea to avoid answering questions about his burqa comments – comments which were later parroted in racist attacks:

Boris Johnson wasn't talking on Sunday, but he did want to give reporters a cup of tea pic.twitter.com/27NabqjL4Y

What Johnson was signalling, none too subtly, was: “I haven’t failed, because I haven’t tried.”

The main thing Johnson ‘hasn’t tried’ is coming up with a Brexit plan. He may be talking about a fresh new approach to Brexit, but he still doesn’t actually have one. Baxter glosses over this:

After the Brexit referendum campaign, which he led and won, the victor was dethroned and locked in a gilded cage as foreign secretary, insulated from the decision-making his campaigning had unleashed. Now he is a free man again. Until Johnson resumes his Brexit leadership role, there will be no peace in the Conservative Party

Was he dethroned, though? I seem to remember Johnson voluntarily exiting the 2016 leadership race and leaving Brexit to somebody else. And what’s all this about “peace in the Conservative Party”? Are you unaware that Tory ministers are publicly vowing to “end” Johnson’s career, or are you privy to him having some sort of charm potion?

Moving on, Baxter worries that if Johnson isn’t given a shot he will:

forever roam the country as the restless spirit of Brexit, with a rightful claim to being unvanquished.

And? Johnson can roam wherever he likes and claim whatever he wants. We can’t make someone PM just because they threaten to go on a ramble with their sour grapes.

There is actually an intelligent question in Baxter’s piece:

She avoids answering this – despite the fact she asked it. We can probably take that as a ‘no’, then. But at least she doesn’t shy away from Johnson’s divorce scandal:

[Boris] has fathered at least one child by another woman while married to the formidable lawyer Marina Wheeler, and possibly two. He had an affair with a colleague, Petronella Wyatt, who had an abortion…

If his divorce is a clearing-of-the-decks exercise before a leadership challenge, at least he can say that his family stayed together for 25 years.

Oh yes, when you put it like that, he’s a real stand-up guy. Baxter has more faint praise too:

I thought that Johnson had a better chance of securing a deal with the EU as a committed Brexiteer with the ability to compromise (or “have his cake and eat it”), while keeping the barmy army of Ukippers onside.

To be fair, as ‘barmy’ as UKIP voters may be, none of them have ever written anything as ludicrous as this article.

We’ve laughed at Johnson, but let’s not forget he’s a champion of liberal values:

Calling burqa-wearing women “letterboxes” while defending their right to cover their faces was a cynical tactic but one that still clung to the shards of his reputation as a liberal. With the far right on the rise throughout Europe, this is no time to leave the debate to white supremacists. That’s playing their game.

Wait a minute – I’m remembering something. Didn’t Johnson meet with Steve Bannon recently – a political operator with ties to white supremacists who’s been travelling around Europe promoting the far right? And didn’t Johnson get into trouble some several dozen times for saying things that were, shall we say, disgustingly racist?

Stuff like this is probably why Baxter thinks it may be Johnson’s last shot at the big time:

The “chuck Chequers” campaign has given him a new shot at the top, but he is still in the position of crouching tiger. It’s kill or be killed this time.

She’s misidentified his position, though. Johnson is actually in a stance called ‘shitting turkey’.

The internet had some considerably hotter takes than Baxter’s own: 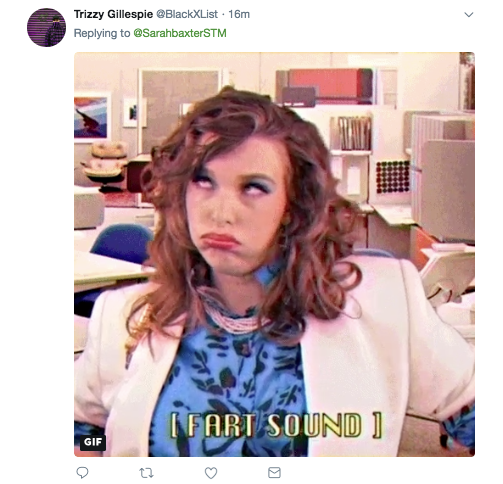 Still though, maybe we should give Johnson a go?

Oh no – wait – it’s ‘we shouldn’t‘. I always get those two mixed up. Presumably Baxter did the same, as it’s difficult to believe someone who thinks Johnson still deserves a shot could rise to the rank of deputy editor at a national newspaper.