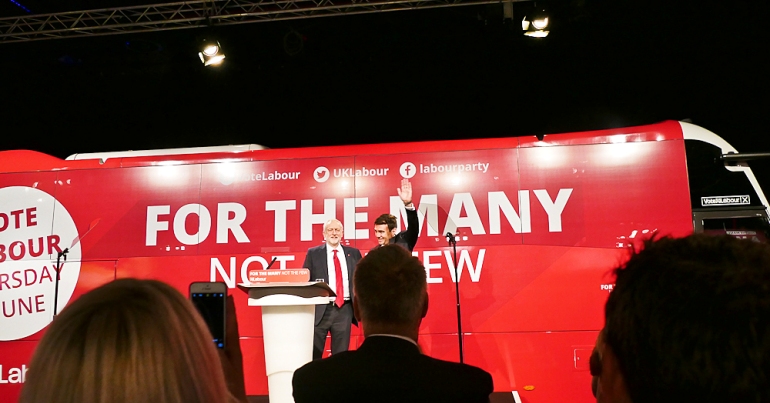 According to an article in the Guardian which shared results from research conducted by consultancy firm Britain Thinks, swing voters now see Labour as a party of “quinoa and student protests“.

It was so striking that what people said to us was: Labour used to be working class, it used to be a pie and a pint – it’s now a protesting student. It used to be someone playing the bingo; now it’s someone going on a demo.

It is interesting that Mattinson treats the categories of “someone playing bingo” and “someone going on a demo” as mutually exclusive. What the article portrays as an alienation of the bingo-playing “traditional Labour voter” could just as easily be a natural process of evolution in political engagement, as a direct result of austerity.

Where is the report?

The Guardian article shares one interpretation of the results. But it’s concerning that Britain Thinks hasn’t made the full report public. This means that Mattinson’s interpretation is the only one we get to see.

Furthermore, without looking at the report in full, there is no way of putting it to adequate scrutiny. What research methods did they use? How did they select their participants? What were the results in full? And perhaps most pertinent of all, who commissioned and funded the research? Without access to the full report, it’s impossible to critique its research methods or judge whether it’s ethically sound.

A comment on Twitter also mentions how Britain Thinks is not registered with the British Polling Council, and therefore has no obligation to put further information about the project in the public domain:

BritainThinks, incidentally, is not a member of the British Polling Council, so don't have to put anything further in the public domain or reveal who funded this, what the terms of reference were, etc. https://t.co/z3MhKsYQ25

Although Britain Thinks has shared a limited amount of information on the project via Twitter, it raises even more doubts. For example, one aspect of the research which appears particularly striking is the framing and validity of questions to participants.

When asked to reflect on the year since the General Election, voters we spoke to felt that the national mood was one of great uncertainty. pic.twitter.com/GAeLrHHqqe

Furthermore, a Westminster Hour programme that was broadcast on BBC Radio 4 on 9 September shared the conversation Britain Thinks had with a focus group in Crewe. Listening to it gives some insight into what can be described as the inanity of the questions put to participants:

The group were asked to ascribe the [Conservative or Labour] party a personality… What would it eat? How would it have fun?

Participants go on to share the questions put to them, which include what they think the ‘party’ would cook on the Channel 4 programme Come Dine With Me.

It’s in this context that a participant mentions quinoa as the preferred food of Labour, while another says:

It used to be pie and mash, now it’s South African peace crisps.

Based on the comments from participants, Deborah Mattinson concludes:

the Conservative party brand is actually quite consistent… whereas Labour is… moving itself to a place that… fairly young people… were all turning their back on Labour… because the party brand is so distanced from their lives.

Mattinson seems to portray the static image of Conservatives associated with “[a] house in London somewhere, big garden… dinner parties, dog walks” as a positive. But what she fails to consider is that the participants’ inability to relate to Labour may just be out of ignorance, rather than anything the party is or isn’t doing.

If these people are not actively engaged with politics, it is more than likely they are unaware of Labour’s stance on issues that directly affect them. She admits herself at the start of the segment that the participants were:

a group of people who, on the whole, will not be particularly engaged with politics.

Without looking at the full report, we can’t know how many participants Britain Thinks interviewed in total and how they interpreted the response. But it’s interesting that individual responses from this radio segment have been amplified and used as indicative of the entire study.

It’s also worth noting that this particular focus group featured only nine participants. Even if we multiply this by three or four groups, they still only reflect a tiny proportion of voters. And yet their responses are being generalised to comment on Labour’s standing among swing voters at large, as Mattinson says:

They’re the people who will decide the next election.

The participants in their own words

When we look at what participants in the focus group actually had to say, we see a different picture. They don’t express a specific inability to relate to Labour, but rather disillusionment with politics as a whole.

It feels like they’re playing politics and it’s real life for a lot of people.

It’s been the same stale powers that be for many, many years now and it’s about time we had a shakeup in British politics most definitely, and we went for someone outside the box.

One participant wanted a party that catered for everyone:

I think if there was to be a new political party that went somewhere in the middle, and had very firm beliefs and catered to everyone, so people on social housing up to myself who work 37, 40 hours a week and are no better off for that… I think I would vote for that.

What frustrates me is the lack of honesty within the political elite… There’s been a number of times where leaders on both sides of the political spectrum have made bad calls. And if they turned around and said ‘do you know what, that wasn’t a great idea but this is how we’re going to fix it,’ that feels better to me than just banging on about it from… an ideological perspective.

So ultimately, it’s not about quinoa at all. Rather it’s about how parties can better engage with voters in swing constituencies and convince them of their party’s ability to shake things up, show integrity, and serve everyone in society.

– Register to vote in the next general election.

– Read the manifestos for the Labour Party, Conservative Party, Green Party and Liberal Democrats to better understand their policies.

– Discuss key policy issues with family members, colleagues and neighbours. And organise! Join (and participate in the activities of) a union, an activist group, and/or a political party.