As politicians and the media go into meltdown over the Jacob Rees-Mogg protest, here are some facts - The Canary 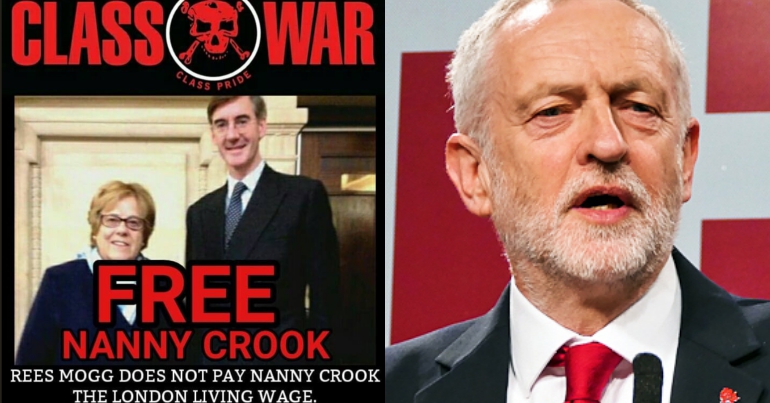 On 11 September, Class War held a protest outside Jacob Rees-Mogg’s house to highlight its claim that Rees-Mogg’s nanny is not paid the living wage. The group released a video of the protest after Rees-Mogg unexpectedly turned up with his children and spoke to protesters. Subsequently, there has been outrage from politicians and the media over the way members of the group spoke to his children.

Much of this outrage has been directed broadly at the left, and specifically at Corbyn. Nadine Dorries, MP for a party that’s been responsible for 3.1 million children living in poverty, tweeted:

This is how the Corbyn cultists behave. What scum bags. Leave his kids alone. https://t.co/mqXw4MhJqA

Meanwhile the Sun, amongst others, clutched at straws and highlighted the fact that Class War member, Ian Bone, knows Corbyn’s brother.

Right-wing blogger Guido Fawkes and the Sun both wrote that Rees-Mogg was “ambushed”. This is untrue. On 7 September, Class War advertised its protest:

In other words, the police, and Rees-Mogg, knew the protest was happening. As one social media user pointed out:

So 5 days ago, the media, Jacob and his family, all knew this demo by Class War was going to take place. That is why the children did not look scared, nor were they whisked away…as any other parent might have done.
So let’s just hold back on the outrage, shall we ? https://t.co/9KJErBObze

Well it was Moggie that brought his family out for a 'chat'. Let's not worry about the facts though when you can get your tweet in the papers looking smug and saintly. https://t.co/cd7eqWeucL

Even Rees-Mogg himself downplayed the protest and the potential impact on his children:

I wouldn’t get too excited about it. It was a few anarchists who turned up and it wasn’t very well organised. It wasn’t terribly serious. We are a free country. They weren’t violent. They aren’t admirers of mine. I am in public life and not everybody is going to like me. That is a reality of public life.

But you’re all so nasty on the left

Dorries wasn’t the only MP trying to blame the protest on Corbyn:

It is scum like this who have taken over @UKLabour, who are bullying and threatening moderate Labour MPs, and this particular bit of work is being really nasty to young children on video.#Corbyn should be ashamed of himself.
Watch the video.https://t.co/CApb714nYg

And James Cleverly, deputy chair of a party that is prepared to support arms sales to Saudi Arabia to use in airstrikes that kill children in Yemen, also expressed outrage:

The behaviour of the people intimidating Jacob and is family is disgusting and unacceptable. So much for “kinder, gentler politics “. pic.twitter.com/7alB9Fe4zP

And even more tenuous were the attempts to link Corbyn to the protest because Bone knows his brother. As ever, facts don’t appear to matter when it comes to Corbyn bashing. It doesn’t take much more than a casual glance at Class War’s or Bone’s Twitter feeds to reveal two obvious facts:

We hate @UKLabour too mate. We want rid of them, the Tories, our bosses and the rich. https://t.co/49BaGKG6GD

This guy is called Ian Bone and he's a member of an anarchist group Class War -neither of the left nor the right. Look at the Tweet pinned to his Twitter feed pic.twitter.com/zSHAd247bH

The reaction of some MPs and elements of the press is a gross manipulation of the facts. This isn’t about the rights and wrongs of the protest. It is about powerful people misrepresenting a situation to fit their own agendas.

Meanwhile Bone thanked the media for the publicity:

This has just been perfect – little effort and maximum publicity.

And Class War used the publicity to promote its next protest at the Conservative Party conference:

If you enjoyed our Rees-Mogg protest (and we know you did) you'll love our upcoming trip to the Tory Party conference.#ToryScumOutOfBrum pic.twitter.com/xVeYXpZ52Q

Whatever stance you take on the protest, two things are clear. Rees-Mogg knew it was happening, chose to be there with his children and was unperturbed by it. Secondly, it was nothing to do with Corbyn.