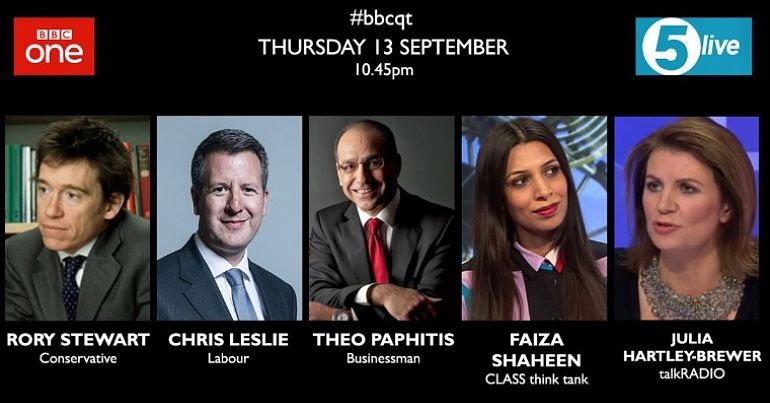 The BBC put out an infographic ahead of its first Question Time of the season on 13 September. Clearly, the public broadcaster wanted to show potential critics how balanced its panellists are.

But the BBC‘s pre-emptive defence went down like a lead balloon with much of the British public. Especially as the programme didn’t live up to the broadcaster’s portrayal of itself.

The BBC News press team alerted people to Question Time‘s return after its summer break on 13 September. But the public broadcaster noted that it “often” gets questions about its choice of panellists. So, it included an infographic to put those queries to bed:

Tonight at 22:45 @bbcquestiontime returns for a new series on @BBCOne. We often get questions about our panels so we’ve crunched the numbers and here’s a chart showing a breakdown of panellists since 2000. #bbcqt pic.twitter.com/54HSlAwHLU

Unfortunately for the BBC, its choice of panellists for the very first show of the season didn’t exactly bolster its claim of balance:

The BBC's idea of 'political balance' is absolutely farcical:

This sort of panel line-up isn’t an anomaly either. It chose almost exactly the same ‘balanced’ panel in May, just with different people taking up the left-wing vs right-wing positions:

A record four Tories on the upcoming #BBCqt

Akala is pretty Left-Wing but apart from him they have the most Right-Wing Labour MP as well as three official Tories. pic.twitter.com/9Zcna135uI

But people didn’t only take issue with the BBC‘s choice of panel after its Twitter message. They raised numerous problems with its defence. Some questioned the date range it chose:

Because that would support the hypothesis that the #bbcbias exists.

By adding in lot of additional data from prior to that shift it disguises this.

My thoughts exactly. Have they had to go that far back to get to the point where the SNP would be ahead of UKIP?

Others criticised the BBC‘s choice not to acknowledge that “other panellists” often have left/right leanings of their own:

Trying to write off over a third of your panelists as having no political persuasion because they are not MPs. Do me a favour!!! #BBCQT #BBCBias pic.twitter.com/IJ5PgVwrvn

Meanwhile, people also called out the broadcaster for brushing over the fact that Labour representatives can differ in important ways:

Your carefully created chart means very little. Most of your Labour since 2015 are carefully selected Blairites, you went back to 2000 to avoid the huge slice that UKIP would otherwise have taken, and 'other panellists' usually includes RW think tanks. We're not fooled. pic.twitter.com/Pug996aSDk

Of course, with the amount of discussion Question Time has given to Brexit and Nigel Farage, that came up too:

Now do it again for "Pro-Brexit" and "Anti-Brexit". And again for "UKIP MEPs" versus "Any Other MEPs". And then again for "Compulsively Lying Populists" versus "People Who Have The First Idea What They Are Talking About".

"often get questions" my shiny metal ass. You're trying to defend yourselves from people who've sussed your game & given the number of Farage appearances I'd say you're massaging the figs by putting him down as "Other Panelists", this won't cut it coz we know your game now BBC.

When did Nigel Farage change his name to 36% ?

Show us the goods

A number of people are now asking for the BBC to release the data it used to create the infographic. So, its attempt to answer the questions it “often” gets about panels has just given rise to more. That’s probably not the result the BBC hoped for. Or, as one Twitter user put it:

But then, the BBC shouldn’t really have expected anything less. Especially not when it chooses a predominantly right-wing panel after posting ‘proof’ of its impartiality.