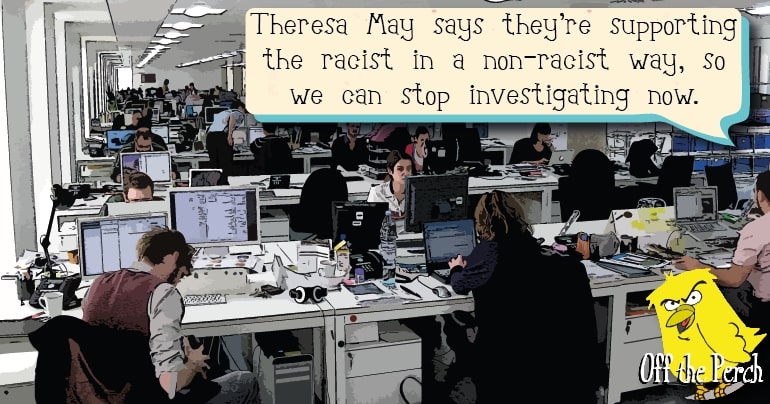 There was a big investigation this summer into whether or not Jeremy Corbyn is a racist. There was less attention put on the Tories, who on 12 September threw their support behind the blatantly bigoted Hungarian PM. Don’t worry, though – the media got in touch with Theresa May, and she’s assured them it’s all on the up and up.

In a speech from earlier the same day, May said:

I have a picture here of a man who calls himself a socialist. If you look at his face, you can tell he’s thinking something rotten. I don’t know what it is, but I can assure you it’s Jeremy Corbyn’s fault!

The media has been doorstepping Jeremy Corbyn over ‘PicturedBadThoughtsGate’ ever since:

Jeremy Corbyn outside his house this morning, tells a BBC pool cameraman “Right, can you turn it off?” And he raises his hand towards the camera. pic.twitter.com/cUWiI0TEFd

Defending herself, May said:

Because the print media is increasingly poorly funded, less and less investigative journalism is being commissioned. This story shouldn’t need investigation, though. The Tories supported a tinpot Mussolini in full public view – how is that getting less attention than the time Corbyn didn’t quite bow enough?