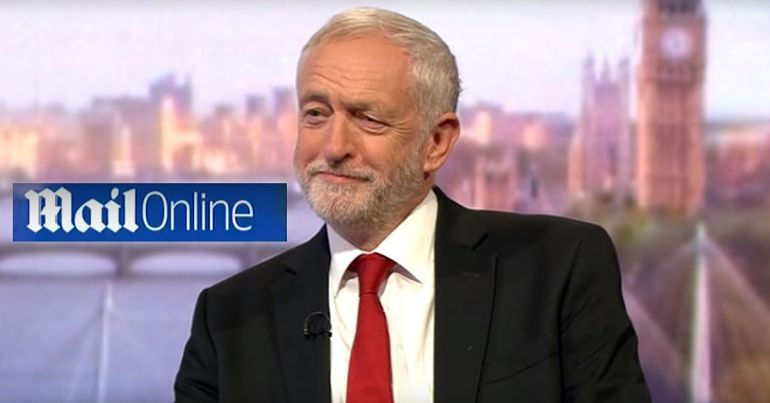 On 13 September, to the amazement of many, the Mail Online actually praised Jeremy Corbyn’s Labour Party:

This, from @DailyMailUK and not a sneering word in sight!!!>> https://t.co/uHKIsILIOJ

The Mail Online published a story highlighting Corbyn’s “most diverse shadow cabinet ever”. It described how during Prime Minister’s Questions (PMQs):

Mr Corbyn was surrounded by a ‘donut’ of politicians whose family roots are from countries including India, Yemen, the Jamaica, and Nigeria.

And of the 14 MPs sitting closest to Mr Corbyn at the despatch box yesterday, 12 were women.

In contrast, Theresa May’s immediate circle in the Commons yesterday was far less diverse – with just three other women and two MPs from ethnic minority backgrounds sitting near her.

As shadow foreign secretary Emily Thornberry tweeted, amazingly the Mail Online‘s article didn’t have a “sneering word in sight”. And people were noticeably shocked by the usually Corbyn-hating publication’s apparent change of approach:

has hell frozen over?

Meanwhile, others thought it was too good to be true:

It's like when the office bully is suddenly nice to you. What are they up to?

But some people were just happy that such a positive diverse picture was being shared so widely:

So lovely to see a positive picture like this. I'd love to see more of the front bench and Corbyn supporting mps in pictures and speaking out in support Corbyn. It's been a nightmare of negativity on twitter for us Labour members who want so much to see us in government ???

The one, I suspect only, time I will retweet @DailyMailUK
Lovely to see so many women in that picture.
What a lovely, forward thinking leader @jeremycorbyn is.#ThereIsHope

Some people aren’t willing to give the outlet the benefit of the doubt just yet:

I suspect this ‘nice’ piece is merely there to rile their readership, rather than acknowledging diversity as a positive.

And others feel it’s just going for a “more subliminal” anti-Corbyn message:

Don't be fooled. They know that this will enrage their readers anyway. Also I think they've realised that the constant Corbyn bashing is driving people toward Labour. They're simply going for a more subliminal message.

Whatever’s behind the Mail‘s move, it’s great to see such a diverse Labour front bench glowing in comparison to the pale insipid Tories.