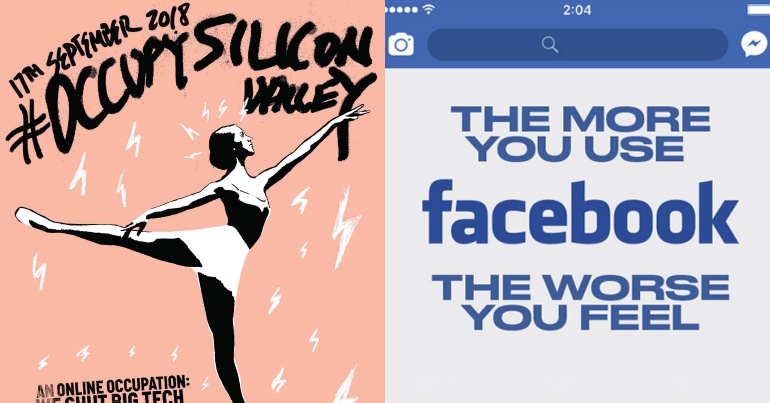 On 17 September, anarchists who led the Occupy Wall Street movement are calling people around the world to Occupy Silicon Valley. The aim is to take back the internet and challenge the rising power and corporate greed of big tech multinationals.

A press release from Adbusters, who are behind the movement states:

On September 17th, we take back control of our lives and minds. We flip the power balance. For one day, we make the internet ours again.

Our aim is to shut down Big Tech for a day… We the people – not you – rule the internet.

The action is planned seven years after the Occupy movement spread globally to protest against economic inequality. Now the aim is to create an “ambitious, global blowback” against “Big Tech’s four most powerful corporations”. Because they “dominate so much of our social, political, and emotional lives”.

The plan is simple but brilliant. It aims to:

unleash a one-day flood of memes, posts, pranks, tweets, and statuses – each of them overflowing with everything Silicon Valley wants to keep offline.

It’s billed as “the first internet-based global grassroots power bloc in history – a superpower without borders”.

As the website explains, four companies now infiltrate almost every aspect of our digital lives:

Facebook claims to connect us, but promotes individualism to its most divisive extreme.

Apple infiltrates every strata of our lives… ensuring its role in everything we do.

Google outsources our desires, fears, and thoughts, narrowing the great mystery of life into a manipulating machine.

So there’s a simple plan: to “crash their servers, flood their feeds, disrupt their algorithms”.

The plan is to avoid Googling anything. With one exception: to flood Google with “one soul-searching question”:

There are ongoing complaints about the way the multi-billion pound corporation treats its employees and “stifles criticism”. Even more worrying are concerns that the search engine giant’s algorithms have been targeted by the far right, and search results are skewed.

In 2017, Google claimed it earned pre-tax profits of £148m in the UK and paid £36.4m in taxes. But, its “complex accounting structure” led critics to suggest it actually generates significantly more UK profit. Actual profits were closer to £1bn last year.

Occupy Silicon Valley also targets Amazon. The aim is to create an “uncanny lull” if people refuse to shop on Amazon.

But there’s another disruptive prank to play:

Some boycotters will go to amazon.com anyway… to fill their carts with giant orders, only to abandon them before checkout.

This very much ties in with the ethos of Adbusters’ annual ‘Buy Nothing Day” in November.

Amazon’s drive for profit has also earned it a reputation for tax avoidance. In 2017, Amazon only paid £15m tax, despite European revenues of £19.5bn. It’s also been criticised for terrible working conditions, despite its huge profits.

Adbusters has created an invoice for Facebook users to:

demand payback for the billions of advertising dollars Zuckerberg’s platform makes… every year… “Report a Problem” and attach an invoice – billed to CEO Mark Zuckerberg – detailing the steep price of the personal detriment his algorithm has cost them. 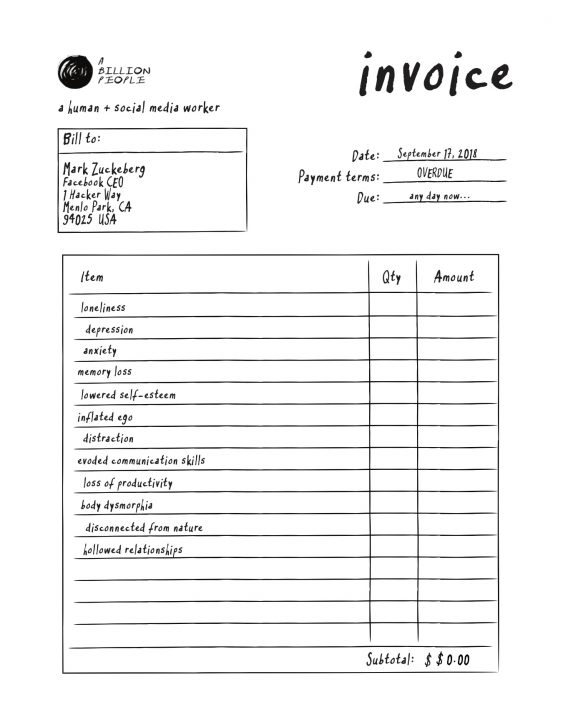 As The Canary has previously reported, Facebook was also heavily implicated in the Cambridge Analytica scandal. Zuckerberg has still failed to satisfactorily answer questions about the misuse of people’s data.

Apple also comes in for attention:

Meanwhile, in the physical world, Apple stores everywhere will have their glossy windows swamped with subversive stickers and slogans that draw attention to the company’s scandals of enforced obsolescence, dodged taxes, and flouted labour laws.

All these companies repeatedly deny criticism of wrongdoing. Apple claims, for example, that “workers are paid according to the law”. Meanwhile, in response to allegations of tax evasion, Google and Amazon continually state that their actions are legal because it’s “avoidance and not evasion”.

And a statement on his Facebook page. Zuckerberg said:

We have a responsibility to protect your data, and if we can’t then we don’t deserve to serve you.

Be in the moment

There’s another way for people to join this action: simply by switching off devices for a day in order “to be magically present in the moment once again”. The website also has a collection of great memes to download and share.

This is a beautifully simple yet powerful way to send out a big message and to hit the global tech giants where it hurts most. Let’s join in and take back the internet.