The DWP has been accused of “grave” and “systematic” violations of disabled people’s human rights by the UN. On 7 September, it effectively whitewashed these claims. A few days later, the DWP released a report that downplayed the impact of Universal Credit sanctions. A few days after that, bizarrely, the right wing news site Guido Fawkes saw fit to defend Iain Duncan Smith – the architect behind many of the DWP’s current failures:

IDS did more to help people escape from a life of poverty on welfare into a world of work with prospects than anyone else in the last decade. https://t.co/qmwmXOIdaZ

Guido Fawkes pointed out in a response to its own tweet: 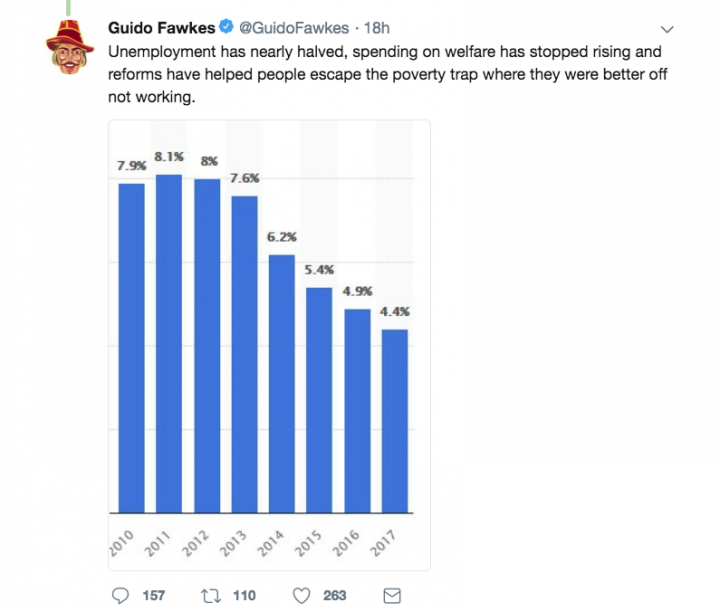 People had some issue with the site’s assessment:

The Tories took millions off benefits… and into in-work poverty.

People being in jobs is great, but not if those jobs are increasingly precarious. It’s also not great when wage growth is consistently low. In 2017, we were predicting to see wages grow less than Italy, Greece, and Hungary. The record for 2007 to 2015, according to the LSE’s Centre for Economic Performance, painted a dismal picture: 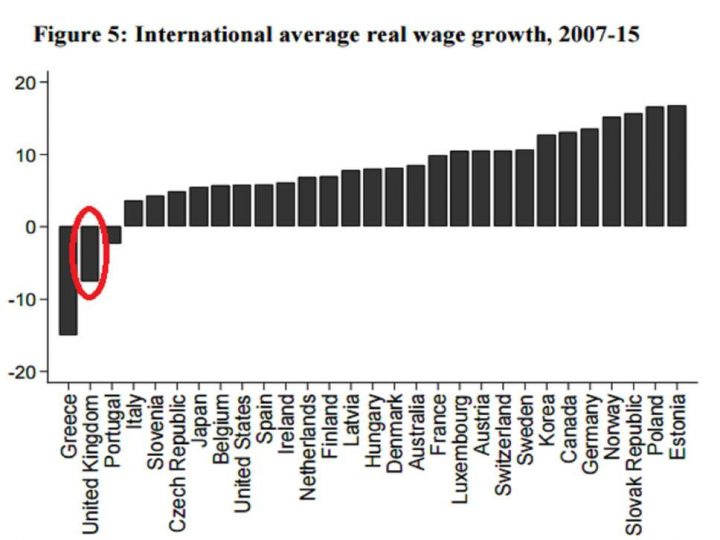 The broader employment issues in the UK are down to the Conservative Party as a whole, but Duncan Smith’s individual record at the DWP is nothing to be proud of:

In December 2017 it was reported that suicide attempts by unemployed disability claimants had more than doubled since the introduction of ‘fit-to’work’ assessments. These were introduced in 2008 by Gordon Brown’s Labour, but became ‘tougher’ under Duncan Smith, and were linked to ‘additional suicides‘.

Someone else pointed out another issue with Duncan Smith’s reforms: 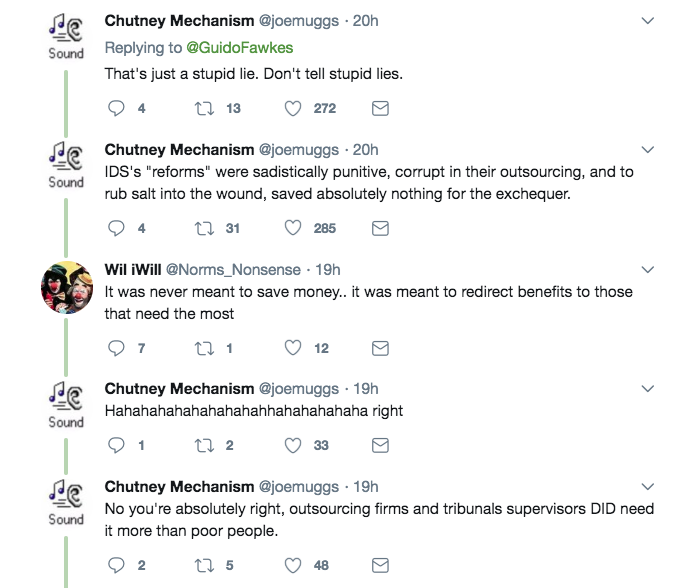 In 2016, it was found that fit-to-work assessments were indeed costing more money than they saved.

The right-wing Guido Fawkes has been criticised before:

Guido is attacking Emma Dent Coad today because this launches. If you are biting you really need to look at yourself https://t.co/RzsXJwhSXb

This hasn’t always stopped ‘centrists’ from sharing the site’s content, though:

One commentator pointed out why continuing to do so is only making the centrist position more unpalatable:

I’ve seen some high profile ‘centrists’ liking/retweeting this, and it is exactly why Labour members don’t trust you and will keep electing Corbyn no matter how many leadership challenges there are lol pic.twitter.com/8v733mzSdW

Anyone who shares Guido Fawkes should remember this moment – the moment when the site defended Iain Duncan Smith’s record at the DWP. Because if it wasn’t obvious what these people stand for before, it’s painfully clear now.