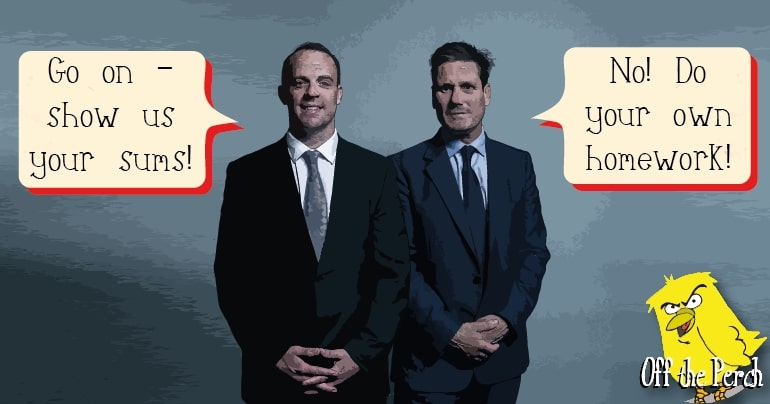 As you can imagine, Starmer told Raab to:

Do your own homework, Dominic! I mean it! I’ll tell Miss!

Although the Tories definitely did their Brexit assignment, the detailed plan they produced was eaten by the dog. As Theresa May explained to Michel Barnier:

Let me be clear, my cabinet and I stayed up all night hammering out this plan. I don’t mean to furrow my own wheat, but the end results were banging. We came up with solutions to problems that no one had even dreamed of. We even worked out a remedy to the Irish border that didn’t involve magic.

When asked if she could write these ideas out again, May said:

We just need another decade to put it all together, sir.

The shifty PM then took an illicit bite of the sausage roll she had hidden in her blazer sleeve.

It’s worth pointing out the preposterousness of the Conservative Party – which is in government – criticising Labour – which isn’t in government and doesn’t have access to the UK’s army of civil servants – for not having a 100% fleshed-out Brexit strategy.

Especially as the Tories’ Brexit plan is so poorly fleshed-out it makes Jack Skellington look like Jack Black.