A decade after the Lehman Brothers collapse, there’s one film we all need to watch again - Canary 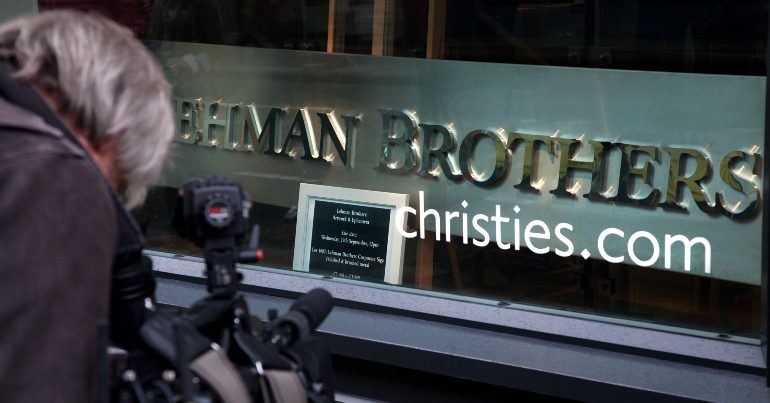 This September marks 10 years since the collapse of Lehman Brothers when the banking giant filed for bankruptcy. And with over $600bn in assets, it is still the largest bankruptcy filing in US history.

Lehman’s fall became a defining symbol of the financial crash. It’s a stark example of the financial industry’s shady dealings and the hopeless failure of governments to regulate it properly.

Like many other large Wall Street financial services firms, Lehman bought up complex financial instruments tied to subprime mortgages. The subsequent bursting of the housing bubble sparked the crisis.

Over the last decade, many people have analysed the causes and consequences of the crash. But one incisive and accessible documentary film, Inside Job, has truly stood the test of time.

The crash led to the worst global downturn since the Great Depression of the 1930s. As the crisis spread across the globe, millions lost their homes and jobs. European countries such as Greece and Spain were plunged into prolonged states of indebtedness and high unemployment. The crisis hit young people particularly hard.

A decade later, there are still many lessons to be learned. But one thing is clear; governments around the world have failed to make the necessary reforms to stop a similar crash happening again.

Understanding what went wrong and ensuring it doesn’t happen again is complex. But Inside Job, released just two years after the crash, does an excellent job of making these difficult subjects accessible.

According to its director Charles Ferguson, the film explores “the systemic corruption of the United States by the financial services industry… and the consequences of that systemic corruption”. Containing a diverse mix of interviews, the film is a devastating critique of the mistakes that led to the crash and the subsequent failure to enact tough reforms.

Ferguson gets some revealing responses from some of the free market fundamentalists whose ideology underpinned the policies that led to the crisis. But its conclusion is damning: governments across the world failed to enact proper reform. It’s also particularly critical of the Obama administration which appointed the same Wall Street insiders who presided over the crash.

The Canary encourages its readers to (re)watch this hard-hitting exposé. It provides an understanding of both the rotten nature of the financial industry and the ‘free’ market economic system.

With a resurgent left taking the reins of both the Labour Party and the Democratic Party, there’s now a chance of breaking the stranglehold of the neoliberals. Through electing genuinely progressive governments there is hope of real reform; the type of reform necessary to bring an end to the era of casino capitalism that gambles with the lives of ordinary people with devastating consequences.

– Express your support for a Robin Hood Tax on financial transactions.

– Contact your MP or member of congress and call on him/her to support better regulation of the financial industry and the establishment of a public bank.