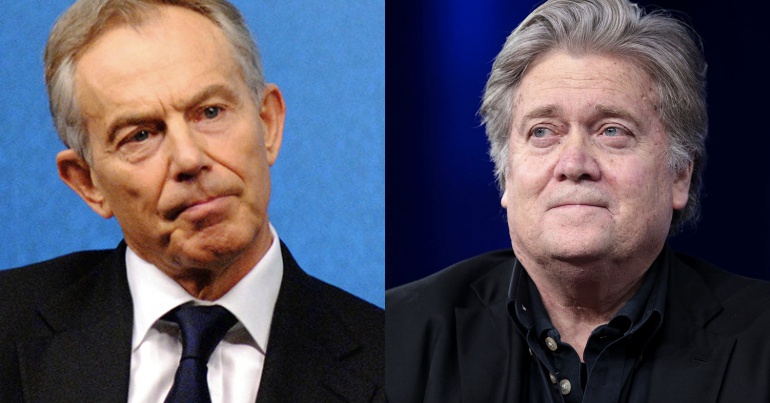 Former prime minister Tony Blair thinks we should “listen to” and “build bridges” with ultra far-right Steve Bannon. No, really.

It seems that Blair’s not content with continuing to attack Labour leader Jeremy Corbyn. Because he also thinks we should listen to a known white supremacist and racist.

On 15 September, Blair was interviewed for the Economist’s Open Future festival. He brought up criticisms levelled at the Economist for interviewing former Trump advisor and Breitbart executive chair Bannon. But far from challenging this, he said:

My view is you’ve got to engage with the people who disagree with you. And you’ve got to be prepared to go out and argue your case and listen to them, and build bridges to them.

Perhaps this shouldn’t come as any surprise.

Dialogue can be positive. But building bridges with racists is another matter. And it seems to have become something of a theme for Blair. As The Canary reported, Blair recently met with Italian deputy prime minister Matteo Salvini. Salvini’s also leader of the League, a far-right party which pushes a staunchly anti-immigrant platform. Critics claim his policies are reminiscent of Italy’s fascist past.

Then there’s the Tony Blair Institute For Global Change, which recently struck a £9m deal to advise Saudi Arabia. A country also known for human rights abuses and perpetuating the devastating war in Yemen.

But many people were swift to criticise Blair’s hypocrisy:

Is that the same alt-right Steve Bannon who many consider has facilitied right wing anti-semitism to become mainstream? Thought so. https://t.co/RM8apx90HG

Tony Blair is all about building bridges with Steve Bannon, a known white supremacist, while he publicly vilifies Jeremy Corbyn, a man who has fought for social justice his whole life. I hate Tony Blair. https://t.co/DLNxnawqUH

building bridges will legitimise Bannon. Instead, remove the neo-con fascist grip on the media and stop warmongering interventionism. People's attitudes will soon change without having to listen to Bannon hate rants. Oh and get rid of Blair

Shame on any media outlet giving time to someone who supports racism, such as Bannon. Even via someone else.

Shame on @TheEconomist for giving time to Blair, a person hated by millions for his war mongering, and anti-compassion rhetoric.

Many people can’t and won’t ever forget that Blair also ‘led’ the UK into the invasion of Iraq. The war killed hundreds of thousands of people, and the Chilcot inquiry concluded it was unnecessary. Both the US and the UK knew it could lead to a rise in terrorism – as it did. This is the same man that many think should be prosecuted as a war criminal.