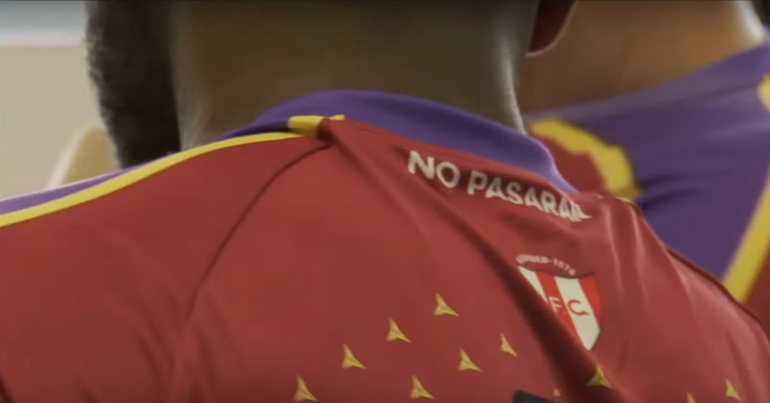 Clapton Community Football Club (CFC) made news when its away kit became a huge hit in Spain. Anti-fascist forces of the Spanish Civil War inspired the new kit design. But the team’s links to left-wing politics don’t stop there.

Five years of bad management at Clapton FC led fans and life members to split away. Though on paper Clapton FC is run democratically by its members, supporters have been unable to join since membership was closed in 2013. The final straw came when fans claimed Clapton FC’s chief executive tried selling parts of the ground, the Old Spotted Dog, to pay off “mystery creditors”.

Clapton CFC founding member Kevin Blowe told The Canary that fans wanted to challenge the closed membership legally. But the lawyers they spoke to had other ideas:

They said, “It’s going to cost you an absolute fortune, it’s going to cost you at least £50,000 to do that. Imagine what you could do with £50,000 if you set up a new club for yourselves. You’re saying you’re the real heart of this club, why don’t you go ahead and do that?” We took it to our members with some advice from Supporters Direct… and then voted in January to do it. We set up as a community benefit society and finally got it all sorted out in May.

It was a popular move. Blowe said all of Clapton FC’s life members and a majority of its fans joined the new team. Although it doesn’t currently have access to the Old Spotted Dog, Blowe says Clapton CFC is the “real inheritor” of the club’s history.

On setting up a new club, Clapton CFC’s members wanted to try something different. Left-wing views were part and parcel of the new club’s founding members. And this led, Blowe told The Canary, to a radically different format:

We’ve abolished the position of chair. We’ve split almost all powers away from the board of directors, which we legally have to have. And everything gets organised by a series of committees, the membership of which is open to anybody who’s a member of the club. … We’ve got committees that organise everything from fundraising to finances, looking after the ground, doing merchandise, doing communications. Pretty much everything you might want to do but organised on that very, very flat structure. They have the authority to make decisions and they have the authority to spend money.

He said this choice was a conscious reaction to rigid structures common not only in Clapton FC but many football teams:

The problem with most football clubs is the tendency that everything comes down onto the shoulders of the same five or six people. They either get burnt out or begin to see themselves as the ones who are actually in charge. We wanted to avoid that, and that was always the intention from the beginning.

The away kit that has put Clapton CFC into headlines across Europe came out of this mindset. Members put forward designs to be voted on. And the winner, inspired by the International Brigades that fought fascists during Spain’s Civil War, reflected the club’s stance on power sharing and anti-authoritarianism.

Clapton CFC’s left-wing DNA goes deeper, though. Blowe said to The Canary that the club is proud of its “absolute opposition” to racism, sexism, homophobia and other injustices. The roots of this can be seen in the Clapton Ultras.

The Ultras were “football nomads” that supported Clapton FC from 2012 until the split in 2018. The group was vocal in opposition to social oppression. Blowe was part of the group and said going to games with the Ultras was a “refuge” from the bigotry common at other games. Many Ultras joined Clapton CFC when it formed.

As a result, social justice is core to Clapton CFC. Not just within its grounds but, as Blowe explained, amongst the wider community as well:

It’s important that people go out and physically make a stand against the far right when they’re marching. But after those things finished we found ourselves coming back to communities where people around us were subject to racist and Islamophobic attacks. Where there’s also the issue of state violence, immigration enforcement and the police. … So it’s not just about going on marches, it’s wanting to organise in our communities as well.

What does that look like in practice? Blowe continued:

Some of it will be about organising food bank collections. Some of it will be providing solidarity through Non-League For Grenfell. And some of it will be doing Football v Homophobia. That’s stuff we’ve done before and you’ll come across at other clubs as well. But the other thing is new stuff. … There will be events throughout the year, talks and so on, that will be part of the ongoing activities of the club. We did one quite recently about Walter Tull. He was one of the first black players in the country and played originally for Clapton.

On 21 July, Clapton CFC played its first game. And the club launched its now-famous away kit on 3 August. It expected to sell 250 kits to members throughout the season. But by 30 August, it had to pause orders after more than 5,000 had been made.

Although this looks great on paper, Blowe told The Canary that the club “doesn’t actually know” how much money it will bring to the club. Every kit is ethically sourced and manufactured by Rage Sports, a worker’s co-operative in Italy, and sold for just £25. Profit margins will be slim, and a portion of it is already earmarked for the International Brigades Memorial Trust. But the club hopes the rush will put it in good financial standing for the next two years.

There was an unexpected bonus too, as Blowe explained:

But what is equally important is the fact we’ve gone up from 350 members to just over 800 members on the back of all the publicity. That means a lot more to us.

People in Spain bought the majority of shirts. And Blowe said the response provided another unexpected outcome:

It’s clearly hit a nerve. The whole issue about the Republic in the 1930s and the treatment of people then, the fact that people were massacred, and so on. It doesn’t get talked about. That’s what people said again and again. There are little pockets of conversations but it doesn’t get on the national news. And suddenly we’re on every national newspaper in Spain and people are talking about it. That’s great.

Football has an uneasy history of oppressive behaviour. The Canary has written about its relationship to racism, sexism, worker exploitation and human rights violations in the past. Clapton CFC is different. It’s not the only club in England taking an explicitly left-wing stance. But it seems to have had the biggest impact. And with membership increasing, its influence looks set to grow.

– Become a member of Clapton CFC and be part of a new type of football.

– Read more about the away kit from members of Clapton CFC.

– Watch a short documentary about the Clapton Ultras.

– Check out more antifascist ultras across the world.