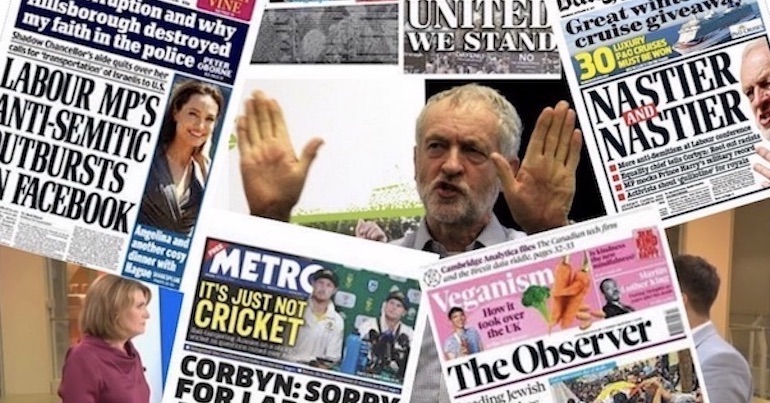 New research from the Media Reform Coalition (MRC) reveals that media coverage of antisemitism in the Labour Party was ‘misleading’, ‘distorted’ and ‘inaccurate’. It’s a damning report; the MRC says “we identified myriad inaccuracies and distortions in online and television news”.

The BBC and Guardian made “false statements or claims”

The MRC was set up in 2011 in the wake of the phone-hacking scandal. It researches and campaigns for a “media system that operates in the public interest”.

In the summer of 2018, it found “95 clear-cut examples of misleading or inaccurate reporting on mainstream television and online news platforms” in media coverage of the antisemitism crisis.

The MRC analysed over 250 “articles and news segments from the largest UK news providers”. It found 29 examples of “false statements or claims”. Many of these came directly from presenters and journalists. Six came from BBC news programmes. The highest was eight – from the Guardian. 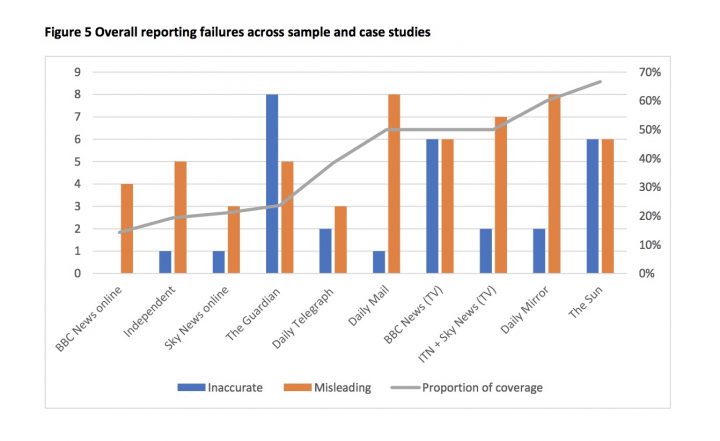 There were another 66 examples of “misleading or distorted coverage”. These included misquotes and a lack of balanced sources. Many didn’t include “essential facts or right of reply”. It also found a pattern of “value-based assumptions” presented without any supporting evidence. A quarter of the sample “contained at least one documented inaccuracy or distortion”.

Too often, criticism of “Labour’s code of conduct” went unchallenged. Reports like this also outnumbered “those defending Labour by nearly 4 to 1”.

And “nearly half” of all the Guardian reports “featured no quoted sources defending the party or leadership”. It also found that, in the Guardian‘s coverage about the Labour code of conduct, there was no challenge to journalists’ or sources’ contentious claims.

In particular, the research highlighted frequently misleading or inaccurate reference to the International Holocaust Remembrance Alliance (IHRA) definition of antisemitism. The report found that:

The outlet with the highest proportion of reporting failures was The Sun followed by the Daily Mail and BBC Television News.

But in many outlets, it found evidence of inaccurate reporting. 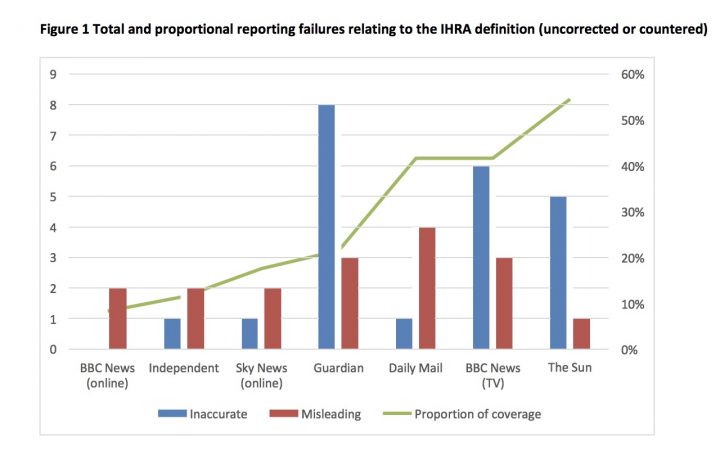 The report is clear that antisemitism is an incredibly complex issue. Where it does exist, it’s vital that our media confronts and challenges it. It acknowledges that our press should always be free to offer commentary and criticism. And it also clearly acknowledges that:

concerns about antisemitic hate speech within the Labour Party are genuine and not necessarily or entirely misplaced.

Dr Justin Schlosberg, from Birkbeck University, is one of the report co-authors. He told The Canary that “journalists should be allowed to make mistakes”. He also emphasised that this report doesn’t make any claims about intentional media bias. But it does also highlight “news media’s role and responsibilities”.

News must be accurate to nurture a fully inclusive debate. And this is important because:

And if this happens, there’s a risk of:

in 2016, a Daily Mail columnist who has been outspoken on this issue described one Corbyn supporter as a “useful Jewish idiot”; whilst in 2018, the Prime Minister’s warm congratulatory words offered to her Malaysian counterpart – a leader who has openly described himself as an ‘antisemite’ – received barely no attention at all in mainstream news, despite antisemitism being such a salient issue on the news agenda at the time

In other words, misleading news is dangerous.

Coverage from much of the UK media claimed Corbyn was an ‘existential threat’. And the press attacked both his leadership and supporters. Meanwhile, Corbyn’s critics – like Margaret Hodge – shared their opinions without challenge from journalists. But as Schlosberg said, press coverage on the issues was “grossly misreported in large swathes of the news” – especially “the news that reaches the most people”.

He explained that a pattern emerged in the reports studied for this research. Time after time, a narrative repeated that the Labour Party is “lost to extremists, racists and the ‘hard left’”. But Schlosberg also explained that, on the flip side, “some of the most aggressive exponents of this narrative were routinely treated by journalists – paradoxically – as victims of aggression by the party’s ‘high command’”.

And the implications of this are significant because, as he also explained, at “a time of unprecedented political instability”:

this raises serious questions of what we expect of a free press and responsible broadcasters.

This is a damning report. Because MRC’s evidence reveals what’s really going on in our media. Bias and inaccuracy about Corbyn from the right-wing press and tabloids isn’t so surprising. Yet much of this was regurgitated by other outlets. And these results shine a harsh spotlight on any claims of impartiality from the BBC.

Meanwhile, the Guardian has always positioned itself as left of centre. But perhaps a Corbyn-led Labour’s just ‘too left’? Whatever the reason, the cracks are showing.

Although the report lays these facts bare, it also shows quite how much power the mainstream media has lost. Because despite these results, Labour has stayed ahead in the polls all summer. And its membership is still growing. This proves that the old media moguls and hacks have lost their grip.

In the void they’ve created, the voices of independent media and people-powered social media gather more momentum every day.

And we won’t stop.

The Canary asked the BBC and the Guardian for comment.

The issue of antisemitism is a divisive and challenging topic to report on, but we need to cover the story and do take accusations of anti-semitism seriously. As the report notes, The Guardian has featured a wide range of voices in this debate – including Jeremy Corbyn himself – we have also published a variety of perspectives on the subject through our comment and letters pages, listened carefully to reader comments about our coverage, and published a number of pieces from the independent readers’ editor about the issue.

The BBC did not reply by the time of publication.