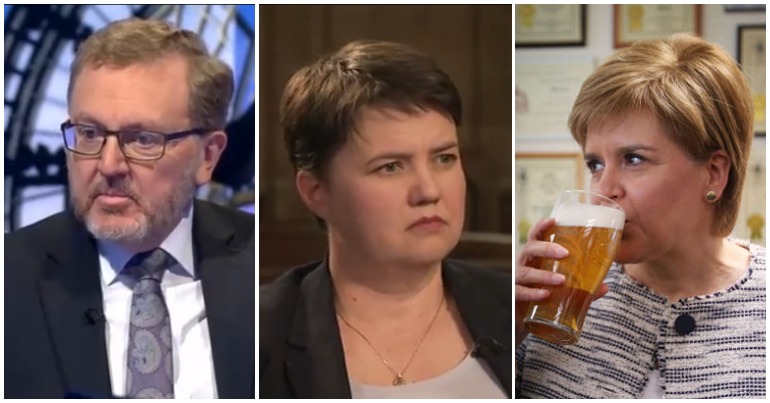 On 14 October, Sturgeon beautifully exposed Davidson and Mundell for their “bizarre position”:

‘We’ll resign if you do anything that makes Scotland think there’s a better alternative to a hard Tory Brexit’ say Mundell and Davidson! First, what a bizarre position – isn’t it their job to stand up for Scotland? And, second, have they the gumption to resign? I bet they don’t! https://t.co/mR64ApibUr

And she called their bluff, questioning whether they have the “gumption” to resign.

Davidson and Mundell threaten to resign

Davidson and Mundell stated in a joint letter to Theresa May that they wouldn’t support a Brexit deal that had different arrangements for Northern Ireland. They claim separate arrangements will strengthen the case for Scottish independence.

In the letter, Davidson and Mundell said:

Having fought just four years ago to keep our country together, the integrity of our United Kingdom remains the single most important issue for us in these negotiations

We could not support any deal that creates a border of any kind in the Irish Sea and undermines the Union or leads to Northern Ireland having a different relationship with the EU than the rest of the UK, beyond what currently exists

The DUP leader Arlene Foster has adopted a similar stance. As reported in the Belfast Telegraph, the DUP will not accept a deal where there is “divergence which separates Northern Ireland from rest of UK”.

The reaction to the resignation threats

Many seem to agree with Sturgeon.

But they also don’t want to continue to participate in the customs union and single market so how do they suggest resolving it? Utterly contemptible. They can’t achieve a no hard border in Ireland without participation in the same trading arrangements as the EU. https://t.co/w6MLFGcuJO

SNP MP for Edinburgh South West Joanna Cherry pointed out that both Davidson and Mundell are backing the “ghastly DUP”:

On Sunday Politics Scot @Feorlean points out how ludicrous are @DavidMundellDCT & @RuthDavidsonMSP threats to resign if Scotland is not treated as badly as the rest of the U.K. not to mention their backing for the ghastly #DUP #Brexit #ScotlandsPlaceInEurope

And SNP MSP and cabinet secretary for government business and constitutional relations at Holyrood Mike Russell didn’t hold back:

Read this & reflect this is the cause for which Mundell & Davidson said they would resign …not the wellbeing or prosperity of Scotland, but this….Unionists plan ‘guerilla war’ against Northern Ireland Brexit plan – POLITICO https://t.co/CUJpHsu9ep

The Tories’ opponents are clearly not falling for this daft charade.

Just in case there was any ambiguity out there over Sturgeon’s mandate to hold another independence referendum, Ferrier offered a handy guide:

Here's a few democratic outcomes for you: pic.twitter.com/w5ZJgpa0n9

If only Mundell had threatened to resign after his ‘Brexit bonanza‘ promise; a promise he made to the Scottish Parliament which didn’t come to fruition.

If that had happened, perhaps Davidson and Mundell would have a shred of credibility left. This is their party’s mess. They can’t cry wolf now.

– Think Brexit is a disaster? Join the campaign for a People’s Vote

– If you think Scotland should be an independent country,  join the SNP, the Scottish Green Party or the Scottish Socialist Party