A trail of dirt still links the Washington Post to Saudi Arabia. Yes, even now. - Canary 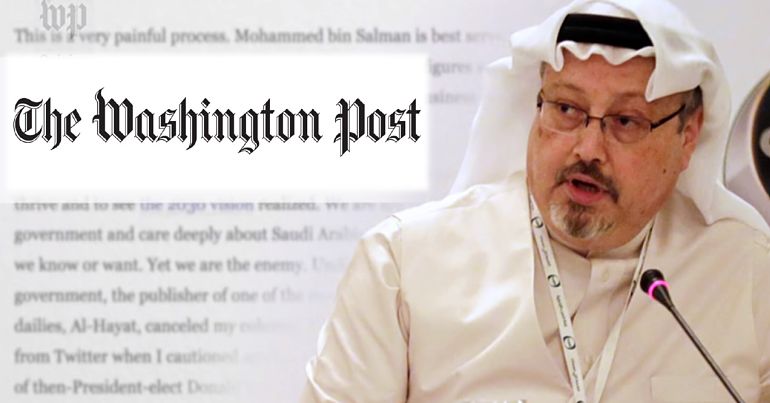 It’s been almost two weeks since Washington Post columnist Jamal Khashoggi disappeared. After walking into the Saudi Arabian consulate in Istanbul on 2 October, the critic of Saudi crown prince Mohammed bin Salman didn’t walk back out. And Khashoggi’s likely murder has received global condemnation – not least from writers at the Washington Post. But there’s still a trail of dirt that links the Washington Post to Saudi Arabia. Even now.

On 15 October, the Intercept’s Glenn Greenwald revealed that the Post “continues to pay and publish undisclosed Saudi lobbyists and other regime propagandists”.

Those Saudi lobbyists still on the Post’s payroll include Carter Eskew. His Glover Park Group, writes Greenwald, “is the second-most active lobbying firm for the Saudi regime”, earning $150,000 per month. The Glover Park Group is a strategic communications and government affairs firm. It claims that it looks “for people who are driven by the desire to be involved in the most pressing issues of the day”. It has nonetheless remained conspicuously silent on the pressing issue of Khashoggi’s likely murder.

Another columnist, Ed Rogers, also holds strong ties to the Saudi regime. Rogers is the chairman of BGR group, which is contracted to “assist the Saudis in communicating priority issues regarding US-Saudi relations to American audiences including the media and policy communities”. Rogers, who “handles the Saudi work”, last published for the Washington Post on 12 October.

That Eskew and Rogers remain on the Washington Post’s payroll must horrify Khashoggi’s former colleagues and friends.

Washington Post owner and world’s richest man Jeff Bezos has similarly shared close ties with the Saudi crown prince. In March 2018, he hosted the crown prince in Seattle, during which time they discussed technology and laughed together. Bin Salman has also met with the likes of Bill Gates, former US presidents, and Richard Branson.

But unlike Virgin Group founder Richard Branson, Bezos so far seems unwilling to sever ties with Saudi Arabia. After the news of Khashoggi’s disappearance, Branson suspended business links with the country. Bezos, on the other hand, does not yet appear to have released any press statement on the matter.

International opposition to Saudi brutality – in Yemen in particular – is a long time coming. Now, people have the opportunity to use Khashoggi’s disappearance to pressure British and US politicians, journalists, and corporations to sever ties with the country. This might be the last chance to prevent total catastrophe in Yemen.

– See the companies and individuals still planning to attend Saudi Arabia’s ‘Future Investment Initiative’ – and decide whether they’re worthy of your support. You can also contact them to share your concerns.

– Ask the Washington Post why Saudi lobbyists are still on its payroll.

– Write to your local MP about ongoing British military assistance to Saudi Arabia.