Nicola Sturgeon nailed her Brexit speech, and the Express is not happy - Canary 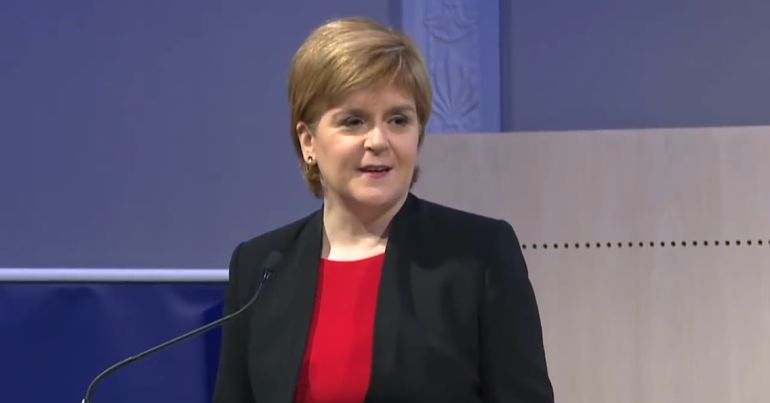 On 15 October, Scottish first minister Nicola Sturgeon delivered a speech at the Royal Society of Arts (RSA). It was on the contentious topic of Brexit. Sturgeon used the speech as an opportunity to promote the UK staying in the single market and customs union as a “compromise” between leavers and remainers. But the Leave-supporting Daily Express didn’t take too kindly to this proposal, or her speech.

The mainstream media are not often fans of Sturgeon when it comes to constitutional matters. But the first minister set out her compromise for the UK, which she says reflects the result of the EU referendum.

Sturgeon said in her speech at the RSA:

membership of the single market and customs union is surely the obvious democratic compromise. It is certainly in my opinion a better reflection of the referendum outcome than anything the UK Government has so far proposed.

This would see the UK adopt a Norway-style arrangement with the European Union.

But the Daily Express didn’t take too kindly to the speech, or the digs at the UK government. It clutched its pearls and led with this headline:

But voters were quick to call Crerar out:

This is a great example of the framing that is putting people off MSM 'journalism'.

It seems Sturgeon cannot win with some when it comes to Brexit or Scotland’s constitution.

Sturgeon, Scotland and the speech

Sturgeon started her speech openly and honestly. The first minister of Scotland said that she and her government come from a perspective of opposing Brexit. But since the vote, the Scottish government has tried to “recognise” the overall UK result – “even if [they] don’t entirely understand it”.

The European Union has supported Ireland and shown it nothing but solidarity as it confronts the challenges of Brexit; by contrast, the UK has dismissed and ignored Scotland’s concerns.
Looking at the UK and the EU, it is fair to say that only one has looked like a partnership of equals. And over the past two years that has not been the UK.

She also confirmed that the Scottish government would “do nothing to stand in the way” of a different deal for Northern Ireland. But Sturgeon did say a Northern Ireland deal would strengthen the argument for Scotland having a “differentiated approach” to the rest of the UK. This includes the possibility of Scotland remaining in the single market and customs union.

Sturgeon also set out that Scotland must have the right to choose independence from the rest of the UK, saying:

we believe that when there is greater clarity about the terms of Brexit than exists today, Scotland must have the option to choose a different course, as an independent member of the EU.

And speaking of Theresa May’s “unworkable” Chequers Plan, she joked:

A head in the sand approach will not make the Chequers ostrich fly.

As tweeted by journalist Kirsty Strickland, the joke resulted in “laughs from the audience”.

Of course, Sturgeon’s political opponents took no time at all to criticise her speech.

As the BBC reported, Scottish Conservative and Unionist MSP Adam Tomkins said Sturgeon’s speech offered “nothing new”. He claimed the speech was:

in the hope of drumming up the prospects for Scottish independence

not helpful in the slightest

In reality, Sturgeon is providing logical and sensible solutions to the problems in the Brexit chaos. She has defended Scotland’s interests during the EU withdrawal process when devolution was being undermined.

It could be time for Sturgeon’s political opponents to get behind her, and work to secure a fair Brexit deal for Scotland. The timeline for Brexit is getting shorter and shorter.

– Think Brexit is a disaster? Join the campaign for a People’s Vote.

– Watch Nicola Sturgeon’s speech at the RSA in full.

– If you think Scotland should be an independent country,  join the SNP, the Scottish Green Party or the Scottish Socialist Party.