I was only calling the sick child’s PARENT a 'pathetic cretin', insists former Tory MP - The Canary

Outrage has erupted after former Tory MP and chief of staff to David Davis, Stewart Jackson, was accused of calling a hospitalised remainer child a “pathetic cretin”:

His defence: I was talking about the child’s step dad…

But the former Conservative MP fired back, insisting he was targeting the sick child’s stepfather.

Either way, it’s a not a classy look and Twitter has been merciless:

“Hi a boy is sick in hospital and I need to get a card”
“Get well soon cards are over here”
“No no, he’s a remainer”
“Uh-“
“And I’m a former Tory MP”
“I’m not sure what you’re saying”
“Where is your ‘what a pathetic fucking cretin’ section?” pic.twitter.com/CtzUfRrObl

Stewart Jackson having the pinnacle of a night in, having one (1) beer and labelling a child with cancer a “cretin”

Others wondered how this squared with the Tories’ ‘Respect Pledge’:

Hey @BrandonLewis how is your new 'Respect Pledge' working out for you, I don't think many of your staff and MP's have quite got the message. Stewart Jackson, said this to a Child, a seriously ill Child ffs. https://t.co/VbrkzMTZNl

Blocking out the truth

But Jackson is made of sterner stuff. First he seemed to go on a blocking rampage against his accusers (the author included):

He's blocked me and I've never followed/spoken to the man! When did blocking journalists become an effective way of avoiding criticism & debate? The same time calling a child a pathetic cretin became an admirable use of a powerful position? https://t.co/axWCgNQckd

Although apparently, this is an old habit of Jackson’s…

Stewart Jackson blocked me 5 years ago for calling him a “bloviating gas bag” in a piece I wrote, that is being ahead of the curve friends

He’s a surprisingly sensitive soul – dishes it out well enough, but can’t take it.

Double down, attack and dig a hole

Jackson then initiated ‘operation double down and attack’. 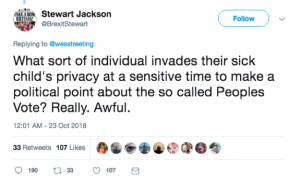 So according to Jackson, the child smiling in hospital with his EU flag is actually a victim of evil remainer indoctrination and exploitation.

But, as far as The Canary understands, Jackson did not ask the child whether he shared his opinion.

Jackson, as a Conservative, presumably believes in taking personal responsibility. But apparently he had no control over the situation and his only available choices were:

a) attack a sick child’s step dad
b) patronise a sick child as unable to hold political opinions of their own.

Option c) ‘don’t reply and offend a family going through a difficult time’ wasn’t an option for Jackson, apparently.

Despite thinking the family of a sick child is fair game on social media, Jackson doesn’t like the same scrutiny himself.

According to the Independent, after his election loss in 2017, Jackson found time to berate his former constituent, Christian Stanley, saying:

“If you print any shit about me on Facebook in the future you will regret it.”

Stanley’s crime was holding Jackson to account online. And judging by some of Jackson’s record, that seems legitimate.

As the Telegraph documented, in 2009 MP Jackson claimed £66,000 pounds in home expenses. Part of this was for a swimming pool, which even Jackson eventually claimed “could be construed as excessive”.

Then, in May 2015, Jackson gave one of the most ungracious victory speeches in political history, berating his losing Labour opponents – as any dignified MP would:

Why the anger at youth?

Perhaps the real source of Jackson’s anger is what the child and his father represent.

As David Lammy pointed out:

.@BrexitStewart so rattled by the nearly three quarters of a million on #PeoplesVoteMarch that you attack either a hospitalised child or his step dad? There's only one pathetic cretin to see here. pic.twitter.com/pvrBIR4stp

Also, as Jackson’s dream of a hard Brexit slips away, the People’s Vote campaign gathers momentum. And young people pose a significant threat to Brexit in a possible referendum. As an analysis of census data shows, millions more young people will now be eligible to vote, with a majority favouring remain.

This guy was negotiating Brexit…

One of the scariest aspects of this whole affair was pointed out by Kevin Maguire of the Mirror:

No wonder Brexit's a mess when until recently this charmer was a key negotiator https://t.co/ORdeLTGYL3

All in all, the incident highlights that Brexit really does bring out the worst in the Tory hard right.