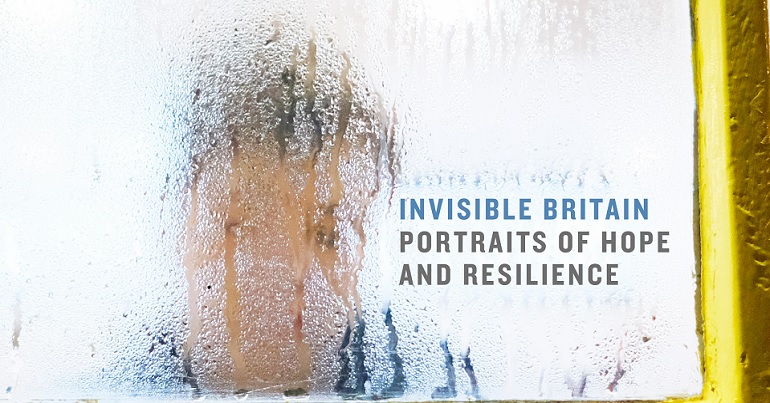 A groundbreaking new book has documented the stories of dozens of people from all over the UK. The running theme of these people’s lives? They’ve all felt the impact of a range of social issues, including austerity. But the book is far from a coffee table addition. It stands as a historical record of perhaps one of the most contentious periods in Britain’s modern history.

Invisible Britain: Portraits of Hope and Resilience is a collection of photographs and stories. It is edited by Paul Sng and curated by Laura Dicken. Sng is the filmmaker and writer behind the documentary Dispossession: The Great Social Housing Swindle. The film focused on the failures and deception behind the social housing crisis, and was released in cinemas in June 2017. But now, he has turned to editing, to record a snapshot of 21st century UK with Invisible Britain. So, The Canary caught up with him to discuss the thinking behind the project and media representation of working class people.

Invisible Britain is a stunning piece of work. Covering 120 pages, the book uses photography and testimony from the subjects to paint a sprawling picture of 21st century Britain. The title comes from the fact that all the people featured in the book have felt ‘invisible’ in society. These are the UK’s forgotten voices, excluded faces and ignored stories. Until now.

A different photographer shot each portrait; many of them did so in the places they grew up. Meanwhile, the words in the book are the subjects’ own. And all has been woven meticulously together by Sng and Dicken.

Sng told The Canary the book offered a very different challenge to making a film:

I worked with a small team and 42 photographers, which was a much bigger crew than I’ve used on a film before. But because we all worked remotely from one another, the process of doing a book felt more isolating than making a film. I was drawn to doing a book because I think you get a very different perspective when you present someone with the opportunity to tell their story in their own words without a camera recording the interview. Removing that level of ‘performance’ was liberating. I was also drawn to the challenge of asking the photographers to capture an element of the person or their story in a single image. There are some stunning photographs in the book, and each one in its own way says something visually that works both with and without the accompanying text.

It’s difficult to pick out individual stories, as their merits are all equal. But the range of issues covered is huge. From the Department for Work and Pensions (DWP), to housing, via the Miner’s Strike, the NHS and the Troubles in Northern Ireland, Sng has created an ethnographic map of the UK in 2018.

What makes Invisible Britain so compelling is that many voices are included. It would have been all too easy for Sng to include just left-leaning opinions. But that’s not what he did. Take Craig Dodds from Peckham. They voted ‘Leave’ in the EU referendum and have essentially never looked back. They said in Invisible Britain:

My main reason for voting to leave was sovereignty – all these unelected politicians in Brussels need to bog off. You notice lots of failed and disgraced politicians seem to end up working for them. I think there’s no such thing as ‘soft Brexit’; there’s only Brexit or ‘hard Brexit’. Anything else is a con job. Same with this nonsense about having a second referendum – another con job.

Some people even say we might need a third referendum. What they really mean is we should keep voting until they get the answer they want. And of course they want to lower the age of voting as younger people are more likely to vote to remain. Well, they would be after they’ve been through our brainwashing education system.

Ross McVittie, a DUP supporter from Belfast, is another example. And from Birmingham, Avi Thandi’s views on immigration may not be to everyone’s taste. But that’s the point. Whether people like it or not, these are the views of working class people in the UK. And they are views that are often silenced. But they need to be listened to – because otherwise how will society move forward?

Sng says the decision to include varying views was “conscious”. He told The Canary:

It was a conscious decision to present a diverse set of views in the book, some of which I don’t personally agree with. I think our society has become very polarised in terms of political ideology; perhaps it always was, and social media merely made us more aware of it. I don’t think labels like ‘left wing’ and ‘right wing’ are very useful, given that they tend to draw very broad brushstrokes that don’t always tell us very much at all.

Brexit has shown us how divided we are in Britain. So unfortunately the notion that we ‘have more in common’ doesn’t seem to be getting through to people. I think we need to rethink how we are governed. The two-party system isn’t working for the majority of people. There’s a malaise in many people that we have to accept the way things are. But I don’t share that view. Community and grassroots campaigns across the UK are showing that it’s possible to effect meaningful change. But they need greater support from organisations that have the capacity to amplify their work and message.

Part of the book’s power is that the words are truly authentic, something you can tangibly feel from the different manners of speaking which shine through. Every story is framed as almost part of an ongoing debate, with the reader as the mediator who draws their own conclusions at the end. It’s exceptionally clever in its execution; delivering a sucker-punch of searing honesty when you step back and reflect on what you’ve read.

Sng has numerous hopes for Invisible Britain. He told The Canary:

First and foremost I hope people will find the stories compelling. In some cases, they may perhaps encourage them to find their own ways of dealing with difficult circumstances. The book is intended to be the first step towards setting up Invisible Britain as a platform. It will work with underrepresented individuals and communities to amplify their voices. And also help enable them to tell their stories via a diverse range of creative projects. We would also run workshops on film-making and photography; a training and mentoring scheme; offer paid work placements on various film productions and creative projects. The arts and media are dominated by the middle and upper classes. So I’d like to help enable more people from working class and disadvantaged backgrounds to enter those worlds.

Often these grassroots campaigns and voices are excluded from mainstream media; therefore, by default, from mainstream discourse, too. It’s this which Invisible Britain aims to reverse. Too often the media only uses working class voices when they have a political point to make. Or when their stories are particularly harrowing. Across the media, only 11% of journalists are from a working class background. Skim through any so-called ‘broadsheet’ and you’ll often see middle class commentators giving their opinions on poor people.

Sng recognises this issue, and says that Invisible Britain tries to redress the balance. He told The Canary:

I think the working class is too often lumped into this homogeneous blob, which is both patronising and wrong. I’m disturbed by the extent to which the ‘thick’ and ‘ignorant’ working class were blamed for the Brexit vote. A total lack of nuance. The only agenda we had was to create something that was inclusive, and present something in between ethnography and visual narrative, which would enable people to have their say on the issues that have affected them. We deliberately avoided any stories that might seem sensationalist. Everyone who shared their story in the book got to review and approve the text, so what you’re reading is directly from the person telling the story, with minimal editing.

Invisible Britain is a towering, blunt, yet dignified piece of work. It’s hard not to be moved by the scale of the project. Because for possibly the first time in recent history, a book breathes life into silenced people’s stories; unedited, brutally honest yet not sensationalist. But moreover, Invisible Britain stands as a crucial record of a period in time; one that the history books will probably not be kind to. It’s of immense importance – because it reflects what’s actually happening in the UK. So, all power to Sng and his team. But more power to the voices and faces in the book. They serve as a reminder: that whatever politicians and the media tell us, we’re not ‘invisible’ at all.

Invisible Britain: Portraits of Hope and Resilience is published by Policy Press on 1 November. Sng will be touring the book with a series of Q&As and screenings of the film that helped inspire the book, Sleaford Mods – Invisible Britain, from 1-10 November. Dates and details via www.invisiblebritain.com.

– Support The Canary so we can keep bringing you the new that matters.