'In the chaos of a full-scale war, it can be hard to get clear answers'. UK Internationalists shed light on the deal with Assad. - Canary 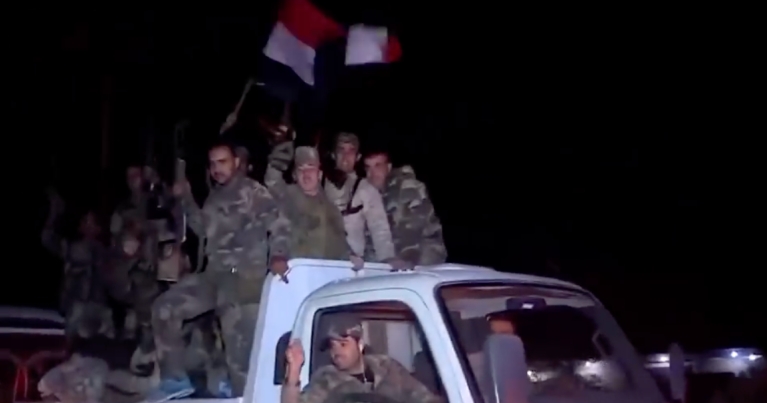 This is the second piece The Canary is publishing from British Internationalists currently volunteering in north east Syria (Rojava). It’s written by Berivan Qereçox and Natalia Szarek.

On 14 October, a military agreement was announced between the Syrian Democratic Forces (SDF) of the Autonomous Administration and the Syrian Arab Army (SAA), the forces of the Syrian regime of Bashar al-Assad. This came after five days of brutal invasion by the Turkish state along the entire border of north and east Syria which is still ongoing.

Assad’s regime carries a history of torture, oppression and imperialism. For everyone in the world following the developments in Rojava, the agreement has raised a lot of questions. In the chaos of a full-scale war, it can be hard to get clear answers. This was written by a few internationalists in Rojava to try and shed some light on the situation, and to share our political perspective.

North and east Syria is under threat of genocide. The Turkish state continues with its butchery and war crimes every minute, including the shelling of civilian convoys, airstrikes on neighbourhoods, and the use of proxy jihadist militias to assassinate politicians and terrorise families. Particularly with ongoing airstrikes, the loss of life, including civilian life, and destruction of an entire people, will continue unabated unless something is done.

The United States gave Turkey the green light to begin its programme of ethnic cleansing. The rest of the international community turned away, fuelled Turkey’s army, did not speak up when the attack was announced in the UN, and stood by, knowing exactly what was about to happen. On the second day of the assault, the United Nations’ Security Council failed to issue a joint statement condemning the invasion, with the US and Russia refusing to take part. The SDF was forced into making an agreement with the SAA – there was simply no other option. And they told the US as much days before it was agreed.

For clarity, what has been agreed is a military agreement. It allows the SAA into certain parts of north and east Syria to engage in joint defence of the border. The SDF, YPG and YPJ will work with the SAA. However, there is currently no written agreement between the Autonomous Administration and the Syrian government – it is purely an agreement to cooperate militarily in countering the Turkish invasion.

It does not dismantle the institutions of the Autonomous Administration. The Semalka border crossing is still under the Administration’s control. Political negotiations between the regime and the Administration continue; and while it would be wrong and unrealistic to say this has no effect at all, the diplomatic work of how the Administration can get recognition, remain autonomous within a unified Syria, and work towards democracy for all of Syria, has been ongoing since the revolution.

Internal security forces are also not affected. Regime soldiers are now at some strategic checkpoints in the conflict zone, and passing through Rojava to reach the border for defence. But the structure of the cities under the administration remains unchanged. There are some more Syrian flags being flown and there were some celebrations of relief when soldiers passed through: for anybody fearing for their life and the lives of their children, any reinforcements are welcome. But it’s not like these flags are raised all over the cities and the streets are suddenly full of regime soldiers. People here are reflecting on what this new phase of the war will bring – how it will change the military situation, and how it will affect the future of the region.

Not the first strategic alliance

Whilst people understand that the SDF had no other choice, this, of course, isn’t easy for everyone in north and east Syria. The Kurdish population of Rojava suffered deeply and for a long time under the Assad regime. Uncertainty is also felt here where the agreement is not fully understood. Most people don’t want to return to the way things were before.

But this is not the first time the people and the movement here have been able to make a strategic alliance they know they cannot trust, while still maintaining the strength and integrity of their organising. For a long time, the US was one such “ally”, with its own track record of imperialism, warmongering, profiteering, and colonialism. During these years, the people of north and east Syria wasted no time imagining the US was their friend. Instead, they worked to strengthen and build the values they believed in, relying on their own strength and the solidarity of everyone in the world fighting for a better future.

This is not a reckless, self-destructive insurrection

The reality of the situation we are in leads to impossible choices between a range of evils – there are no purely good outcomes. The courage and honesty with which the movement faces that, and tries to move forwards with values and ethics no matter how hard the decision, is one of the inspiring things about this place.

The agreement also shows that the movement here values life – this is not a reckless, self-destructive insurrection: this is a long-term, strategic movement that is built on trust, integrity and society, and it is here to stay. Another inspiring thing is the work that will carry on regardless of any strategic alliances or lack thereof: the work of fighting patriarchy, the state, and capitalism, and trying to create a better world. We don’t get to do that from a position of comfort, free to choose ideal conditions. We have to start from where we are. As Internationalists, right now where we are is here in north and east Syria with the people. We will continue to stand shoulder to shoulder with them and carry on that work.

What north east Syria needs now is strong and loud support from the international community, from the grassroots movements that it considers to be its true allies around the world. This support doesn’t have to be without critique or contradiction – in fact, the movement here welcomes it. But critical analysis should not prevent action, and right now militant, radical action in support of north east Syria is needed to stop the destruction of what the movement here has built. As negotiations with the Syrian government continue, this support will continue to be crucial so that the Autonomous Administration knows it has the democratic, ecological, antifascist and anticapitalist movements of the world behind it.