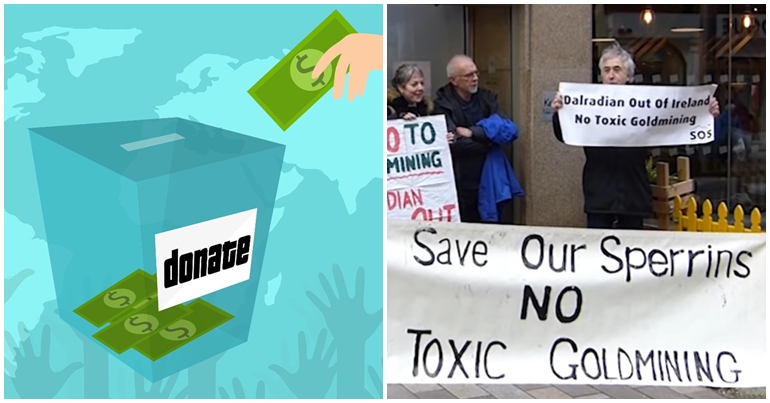 Greencastle is located in an Area of Outstanding Natural Beauty (AONB) in the Sperrin mountains. Dalradian applied for permission to mine for gold there on 27 November 2017. Local people remain opposed to this plan.

Opposition to the mine

One campaigner told The Canary that while he believes Marie Curie is a very worthy charity, he feels this donation is “helping Dalradian get a social licence”. He believes the move could “open the floodgates” for other charities to accept money from the mining giant. As previously reported by The Canary, locals are concerned about the health and environmental impacts the mine would have on their community.

Campaign group Save Our Sperrins told The Canary it:

condemns Dalradian Gold’s cynical exploitation of the current pandemic for cheap publicity for its flagging project. At a time when over 35,000 people have submitted objections to Dalradian’s planning application for a goldmine and processing plant, it is obvious that this Canadian mining company is now desperate. It is sad and disappointing that a charity such as Marie Curie has been targeted, used and trapped by Dalradian’s propaganda machine because of their urgent need for money and PPE at this time.

The fears of this local community have some foundation. Mining, including gold mining, can cause pollution to the local community. Abandoned goldmine sites in the US have polluted rivers and water supplies.

A study published in 2012 examined “municipal mortality due to 32 types of cancer across the period 1997 through 2006”. It examined “excess cancer-related mortality” in populations living near Spanish mining industries. It stated:

Mining installations are releasing toxic substances into the environment which could pose a health problem to populations in their vicinity. … Other tumors also associated in the stratified analysis by type of mine, were: thyroid, gallbladder and liver cancers (underground coal installations); brain cancer (opencast coal mining); stomach cancer (coal and other opencast mining installations); and myeloma (underground mining installations). The results suggested an association between risk of dying due to digestive, respiratory, hematologic and thyroid cancers and proximity to Spanish mining industries. These associations were dependent on the type of mine.

The goldmine proposed by Dalradian will be underground as opposed to opencast.

Ongoing mining activities combined with the legacy of 130 years of operations have caused water, air, and soil contamination in the West and Central Rand, an area encompassing Johannesburg and its surroundings. Residents have been exposed to elevated concentrations of heavy metals and radiation that can contribute to immediate and long-term medical problems ranging from asthma and skin rashes to cancer and organ damage.

A paper issued by the Organisation for Economic Co-operation and Development (OECD) in November 2019 stated:

The extraction of metal ores involves the extraction of large quantities of material using either human labour or heavy machinery from surface or underground mines, creating physical hazards for workers. Further hazards may arise through the use of explosives or chemical agents, and exposure to dust containing hazardous substances in mines. Underground mining is often associated with a high accident rates through the collapse of tunnels and flooding, often with limited potential for recovery.

The paper provides an account of the “possible effects of metal mining” in Ghana. As well as there being a risk of accidents, there’s also the risk of “pneumoconiosis, asbestosis, silicosis and lung cancers” and “increased levels of malaria, colds, skin diseases, diarrhoea and buruli ulcers in workers and those living close to mines”.

And it’s not just confined to Ghana. The paper highlights the USA, the UK, and Canada. It says:

The country with the highest number of reported fatalities from accidents in the category ‘mining and quarrying” in the ILO (2018) dataset (which covers all mining activities, not only metals extraction) for the period 2009-2017 is the United States averaging 144 “mining and quarrying” deaths per year.

Acid rock drainage (ARD), which can pollute surface water, is another problem related to mining:

The Canary contacted Marie Curie for comment. A spokesperson confirmed:

the donation was received in response to our emergency appeal. Every donation enables the charity to reach more people living with a terminal illness and their families

Another campaign group, Communities Against Mining, acknowledged “the squeeze” the charity sector is feeling at this time.

The Canary contacted Dalradian for comment. A spokesperson stated:

As part of their response to the coronavirus pandemic, staff from Dalradian have been volunteering to support their local community since March. Working through our community relations team our colleagues have already covered 2,000 miles, helping make deliveries and collections for vulnerable groups and frontline workers, including reconfiguring our staff minibus to support home visits by doctors.

So far we’ve supported around 50 organisations including charities such as Marie Curie and a range of health providers. Working with local retailers, manufacturers and community partners we’ve provided 800 face visors, 1,500 litres of hand sanitiser, new laptops for students distance learning and helped provide basic essentials for frontline staff who have had to relocate. We’ve also brought forward our bi-annual community fund to help local groups who can’t hold their usual fundraising events.

Dalradian’s proposal for an underground mine has been designed to meet the highest regulatory standards and includes a full health impact assessment. All these matters will be independently assessed by the relevant authorities, but at this stage our focus is on continuing to work with our community to do what we can to help each other through this difficult time.

Our staff have been encouraged by the many kind words they’ve received from frontline workers and the community. As a responsible, local employer we will continue to meet this challenge along with other Tyrone-based firms and play whatever supporting role we can.

Opposition to this goldmine

At the time of writing, there were 35,504 objection letters to Dalradian’s mining proposal and less than 4,000 letters of support. Locals told The Canary they will continue to oppose the mine.