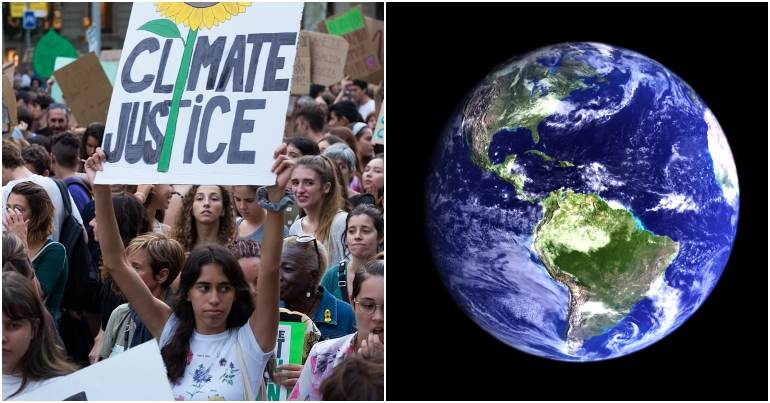 Wanjiku Gatheru, who goes by the name ‘Wawa’, is an environmental justice trailblazer. After founding the grassroots platform Black Girl Environmentalist, an intergenerational community of Black girls, women and non-binary environmentalists, she aims to use climate activism to help pave the way for Black, Indigenous and People of Colour (BIPOC) communities in the environmental movement.

Gatheru is making space for underrepresented voices in climate conversations but also campaigns for BIPOC to be included in the environmental decision-making process.

Growing up in the US, she took environmental studies at the University of Connecticut before becoming a prestigious Rhodes Scholar, and student at Oxford University, UK.

Now Gatheru’s started a new initiative called Reclaiming Our Time to “promote and solidify visibility for Black climate activists”. In collaboration with Pass the Mic Climate and Generation Green, the campaign matches 30+ activists worldwide with organisations like Greenpeace UK, Sierra Club, and Earthrise. In a series of Instagram live takeovers, activists educate followers about the intersections between social justice, environmentalism, and groundwork. Mark Ruffalo and Anne Hathaway are among those involved.

As part of the #ReclaimingOurTime campaign, tomorrow I’ll be going Live on Instagram with @wawagatheru starting at 4:30 EST/1:30 PST to talk about her work and her experiences as a Black activist working in the environmental space. Join us! https://t.co/N6QXoQt5tm pic.twitter.com/TFFVE9ReG0

Running throughout February and March, founders hope to continue the discussions in the lead up to International Mother Earth Day on 22 April.

Gatheru spoke to The Canary’s Aaliyah Harris about all things climate, race and politics.

A lot of my interest has come from understanding my family’s history, as well as the experiences of Black communities in the US. My parents are both immigrants from Kenya which is a frontline country experiencing climate change. The environmental movement is overwhelmingly white-led and as an organiser at university, I have been the only person of colour, not just the only Black person, in most environmental spaces.

#Climate / #Environmental twitter, I have a bone to pick with y’all. Frankly, I’m tired of the way y’all erase/ignore/sideline Black youth in this movement. The campaign I’ve been working on for the past month is experiencing this now and it’s shitty.

Our communities bear a disproportionate burden from the impacts of climate change because of the historic and continuing impacts of colonialism, racism, and inequality. It’s disappointing that the movement tasked with solving this crisis continues to ignore/sideline our voices.

It’s an issue with the environmental movement at large and the media. The environmental movement has been historically white-led and has a very troubled racist history, which led to the intentional exclusion of poor people and people of colour. Especially people who live at the intersection of both of those demographics. A lot of the founding fathers of the environmental movement were racist. They conceptualised definitions to accommodate racialised environments that essentially crafted environments worth protecting, and those that weren’t. Those racialised conceptions of nature and wilderness were used to accommodate the white elite, at the very intentional exclusion of poor people and people of colour. This past year, with the world’s reckoning with anti-black racism, [we’ve seen] the environmental movement at large, non-profits, the private sector and academia begin to reckon with this racist history. But [they’re doing it] without exploring the way that history continues to inform the present: from who’s represented in the green workforce to which voices are understood and articulated as those capable of being leaders, particularly when it comes to youth climate activism.

Why is youth climate activism significant for environmental change?

Youth climate activism hit the mainstream around 2019 with Greta Thunberg gaining international attention. However, something we’ve seen since and before, is that many youths of colour who also participated in doing great organising work in their communities don’t get the same airtime or credibility. We often aren’t distinguished as being leaders within the environmental movement and sometimes in response it’s, ‘Oh, well, that’s all ego why should you get recognition?’. But it’s much bigger than that because particularly for youth of colour, black youth and indigenous youth, our communities are already experiencing climate change first and worse. A huge concern is, if the media and environmental movement are ignoring our voices now on how climate change is impacting our lives, then what does that mean when it gets worse? Our narratives need to be incorporated within climate policies.

What environmental issues must be addressed?

Understanding the intersectionality of environmentalism, and the social dimensions that take a central role in the way that people experience environmental harm and climate change. This will allow us as a global community to be better equipped to deal with the climate crisis and environmental degradation. COP 2021 (the United Nations Climate Change Conference) need to integrate youth voices at the decision-making table, have more women, indigenous and Black participation. COP set a huge precedent for how the folks that do gather engage with environmental decision-making in countries. If a top environmental body doesn’t articulate indigenous or Black women’s voices to be important, what’s there to say about the rest of the world does.

Any upcoming plans to tackle the climate crisis?

Black Girl Environmentalists has exciting mentorship opportunities, book clubs and video calls to discuss environmental hazards that exist such as those in skin lightening creams. Studies show that lighter skin tones are considered to be more desirable which has led to disproportionate exposure to environmental hazards through skin lightening creams detrimental to overall health. Yet, online there aren’t many resources for information, nor has the environmental movement ever really centred on those things which are part of the lived experiences for many people of colour. Particularly in Nigeria, India and China. We deliberately create space to discuss hazards and we’ll be providing educational resources filling the gaps in the mainstream environmental movement.