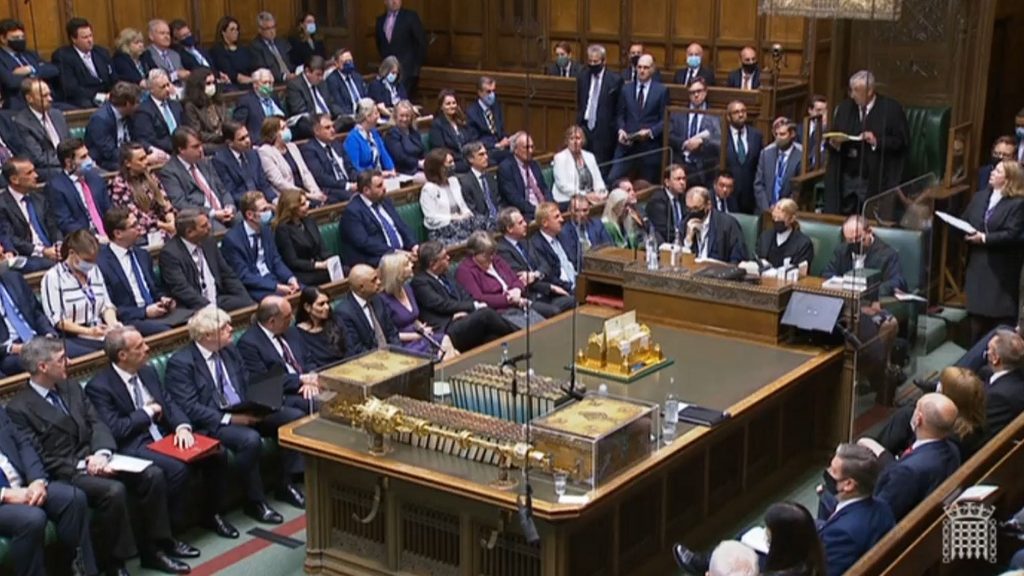 Conservatives are being “cavalier” with the health of other parliamentarians because they have stopped wearing face masks in the House of Commons, opposition MPs have said.

The SNP’s shadow Commons leader Pete Wishart warned there was an “increased risk” from Covid in the chamber, and called for all MPs to continue to wear masks to protect one another.

But Commons Leader Jacob Rees-Mogg defended his colleagues’ decision not to wear face coverings, saying MPs were “right to make a judgment for themselves” as the Commons chamber was “not particularly full” of people.

When the chamber was full at prime minister’s questions on Wednesday, only a small minority of Conservative MPs including former PM Theresa May wore masks, while a majority of MPs on the opposition benches did.

Our constituents are now beginning to notice what is happening here and they are dumbfounded in what they see.

One side of the chamber, nearly everybody with a face mask.

On the other side, practically no-one.

It’s as if keeping our workplace and colleagues safe has now become an ideological and political position, that somehow being a Tory MP makes you exempt from contracting and spreading Covid.

The Leader of the House knows the score.

He was at a meeting with myself on Monday, where we heard from Public Health England that there’s high levels of CO2 in this chamber.

That means the air that we exhale is being confined in here, leading to increased risk.

He asked the Commons Leader to “help us keep the staff and the people in this House safe”, and said that, at the meeting he referred to, Rees-Mogg said he would wear a face mask to encourage his colleagues. Wishart said:

Tory MPs can be as cavalier as they want with their own health, but when it comes to their colleagues and the people who work in this House that should be a matter for all of us,

Commons Leader Mr Rees-Mogg said in response that Government guidance is “completely clear” on when people should wear masks, adding:

It is said specifically in the guidance that you might want to wear one when you are in a crowded space with people you don’t normally meet.

Labour MPs also called for their Conservative colleagues to return to wearing masks in the chamber.

Can I just kindly say to the Leader of the House: wearing a face mask is not about personal choice, it is about protecting the health and safety of other people.

In all my years in the House of Commons I have always found it very sensible to listen to what the Speaker says, and the Speaker has advised that masks should be worn around Parliament.

In July, Commons Speaker Sir Lindsay Hoyle pleaded with MPs to continue wearing face coverings and “not push the limits for the sake of it”.

While MPs are only encouraged to continue wearing masks following the easing of restrictions on July 19, it is compulsory for staff on the parliamentary estate to have to wear a covering.