An officer assaulted an autistic boy. It's time to get police out of schools. - Canary 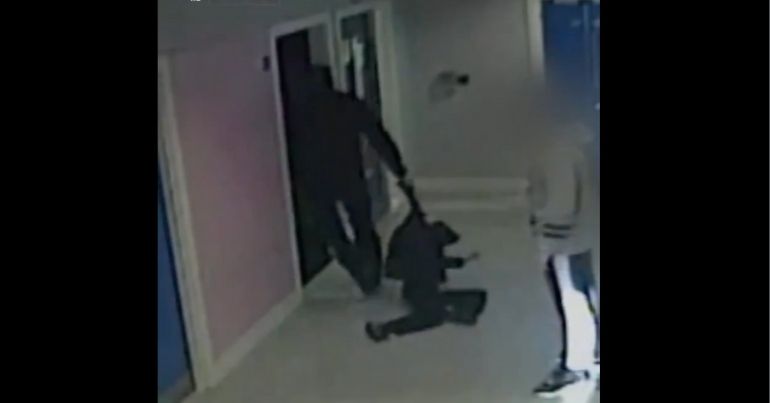 On 7 September, Channel 4 News shared distressing footage of a school-based police officer assaulting an autistic 10-year-old pupil. Merseyside Police has introduced further training for its officers based in schools. But campaigners argue that more training is not the answer, and that police in schools will always be a harmful problem rather than a solution.

No police in schools

Distressing CCTV footage shows Merseyside Police school-based officer PC Christopher Cruise threatening to kick an autistic 10-year-old boy who is lying on the ground. The officer proceeds to drag the boy across the floor and fling him through a door. Channel 4 News shared:

In CCTV footage obtained exclusively by Channel 4 News, PC Christopher Cruise is seen threatening to kick a young boy lying on the ground, he then grabs him and drags him along the floor into a room.

School-based police officers carry out policing and surveillance on school grounds. We have seen an increasing presence of police in UK schools in recent years. Campaigners have raised concerns that the presence of police and state violence in educational settings will disproportionately impact children with special educational needs and disabilities, and working-class pupils from Black and ethnic minority backgrounds.

Responding to the footage, campaign group Kids of Colour tweeted:

Channel 4 have shared a story about a 10 year old with autism, who was assaulted by a police officer in school.

This won’t be the first or last harmful incident caused by a school-based police officer.

Our love goes to the young person. The only solution is #NoPoliceInSchools.

We are appalled by news of a young boy assaulted in his school by a police officer. Our solidarity goes to him and his family.

They are a risk to all young people, particularly those most harmed by racist, classist and ableist state violence. Read more:https://t.co/Kbp1YZO1S9

In July, No Police in Schools campaigners celebrated the success of their campaign calling on the Greater Manchester Combined Authority (GMCA) to halt plans to place more police officers in local schools and to remove existing school-based officers. In response to the campaign, Manchester city council motioned to remove and re-deploy all existing officers in local schools. However, council leaders reiterated their commitment to stationing 20 more officers in Manchester schools. As demonstrated by Cruise’s abhorrent behaviour, the fight to protect children and young people from overpolicing is far from over.

The threat police have is real. This baby boy should have never suffered harm from an officer, and for it to have happened in a place of education 😤 A place that should safeguard him and enable him to learn and thrive. Police have no business being in schools. #nopoliceinschools https://t.co/HvyQDPku4O

💔 That was so heartbreaking to watch. All the more reason not to have police in schools#NoPoliceInSchools https://t.co/kP3SFZ1X74

The UK is not innocent

Speaking out about the very real issue of police in UK schools, Kids of Colour founder Roxy Legane tweeted:

It was only a matter of time before a video emerged that documented the very real horror of police in schools.

When we’ve challenged police in schools, an author of a GMCA report that recommends them, scoffs ‘we’re not the US!’.

Indicating what the UK’s education system could look like if we continue to see an increasing police presence in schools, US-based youth-led Alliance for Educational Justice shared:

Cruise has been fined and convicted of assault. According to Merseyside Police, it has provided their school-based officers with further training following the incident. But campaigners are arguing that training is not enough, and that the footage demonstrates exactly why police should never be stationed in schools.

The Network for Police Monitoring added:

The reality of policing in schools – working class, racialised and SEN children brought into closer contact with state violence and the criminal justice system.

Instead schools need trained and resourced educators and support workers.

Reflecting on the struggles and triumphs of the ongoing campaign to remove police from UK schools and introduce measures that support young people, Kids of Colour’s Roxy Legane shared:

Just over a year ago we wrote this report. Overwhelmingly, communities of GM said #NoPoliceInSchools.

We have had wins since, from union support to Mcr borough pulling school officers out.

We will continue to win and to carve out the alternatives.

Read if you haven’t already. https://t.co/cENW2DBlin

The distressing footage reflects what No Police in Schools campaigners have been arguing: that policing is never a solution, especially when it comes to marginalised and vulnerable children and young people. As campaigners have highlighted, “young people need support, not suspicion”. This means investment in youth workers, counsellors, teachers, and other services which support pupils rather than policing which traumatises them. People looking to take action can get involved in the campaign via No Police in Schools’ website.