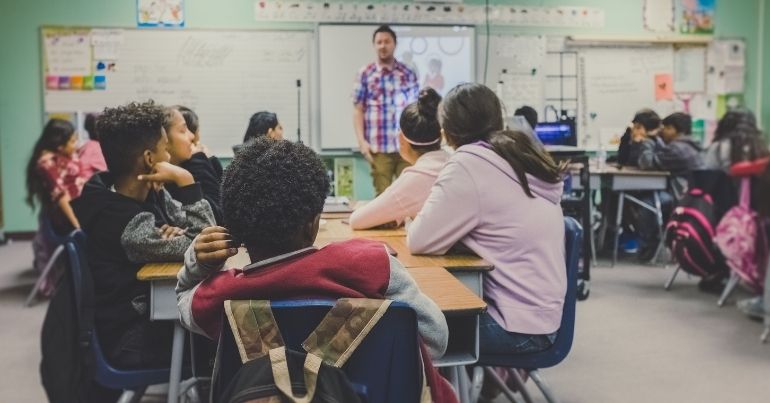 Kids of Colour and the Northern Police Monitoring Project (NPMP) have launched a petition calling on the Greater Manchester Combined Authority (GMCA) to halt plans to place more police officers in local schools. The No Police in Schools campaign is also calling for the local authority to remove existing school-based police officers (SBPOs).

Kids of Colour and NPMP are calling on GMCA to halt plans to introduce more SBPOs into Manchester schools, and to remove existing officers. This is based on concerns that police in schools will disproportionately impact working class children of colour, “create a climate of hostility and suspicion”, and bring more children into contact with the criminal justice system.

Speaking to The Canary in February, co-author of Decriminalise the Classroom and NPMP member Dr Laura Connelly said:

As our No Police In Schools Campaign makes clear, teachers, parents, young people and community members have grave concerns about school-based police officers. Our own community consultation of over 500 people in Greater Manchester shows that SBPOs have a range of negative consequences that are felt most acutely by those from working-class and Black and ethnic minority communities.

We are deeply concerned that police will bring into the school setting the institutional racism and police violence already experienced in over-policed communities. They will foster a culture of low expectations.

Calling on the local authority to invest in supportive rather than punitive measures, Kids of Colour and NPMP said:

If GMCA is truly interested in keeping young people safe, instead of investing in police in schools, it should invest in school counsellors, youth workers, teachers, and community infrastructure.

As set out by NEU vice-president Vik Chechi-Ribeiro, the “school-to-prison pipeline” refers to the systematic direction of pupils towards incarceration through educational exclusion and criminalisation. This is a product of harsh disciplinary policies that confront routine school-based behavioural issues with ‘zero tolerance’, and the presence of police, security, and surveillance in schools. This contributes to greater suspensions, expulsions, referrals to law enforcement, and arrests for violations of school rules. The presence of police in schools disproportionately impacts working-class pupils from Black and ethnic minority backgrounds, groups which already experience over-policing.

Police in schools is a growing issue nationwide. More than 650 police officers are working in British schools, with many assigned to sites in areas of high deprivation. We have seen the devastating and disproportionate impact of police in US schools on Children of Colour, particularly those with disabilities. In spite of fears that police in schools will criminalise vulnerable pupils, authorities increased the number of police working in London schools by 19% between 2016/17 and 2019/20. In February, London mayor Sadiq Khan suggested further funding for SBPOs.

Responding to this, Connelly said:

The additional funding would be better invested in mental health support in schools, counsellors, teaching and support staff, and community infrastructure. It is this investment, rather than more policing, that will help to keep our young people safe.

Towards an education system that supports pupils

Police in schools will not solve the complex issues that impact young people’s lives. In most cases, they will exacerbate them. Schools and communities need solutions that actively challenge the root causes and consequences of social problems. As Kids of Colour and NPMP have highlighted, “young people need support, not suspicion”. This begins with investment in communities, and in education, youth, social, and mental health services. The coalition is calling on supporters to sign and share their petition, and for people to join the No Police in Schools campaign to help build an education system that supports pupils rather than traumatises them.