Anti-arms trade campaigners need your help this weekend - The Canary 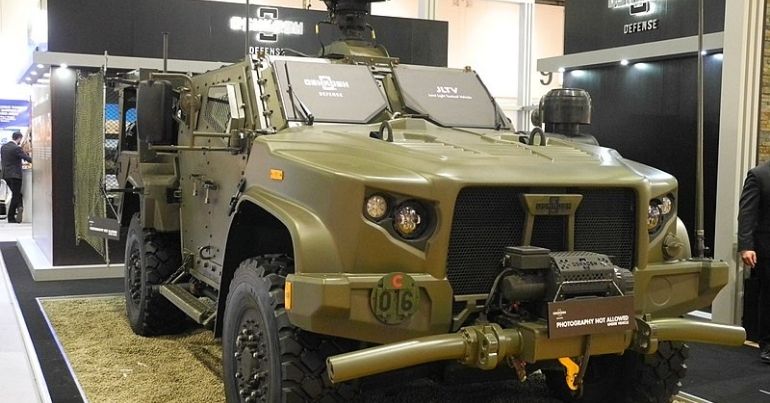 This weekend sees action across the country to protest against the presence of arms dealers and despots in our cities. In London and Liverpool, action is already underway to resist major arms fairs.

DSEI in London and the AOC event in Liverpool will see death merchants, military leaders, and authoritarian regimes gather to peruse new weaponry and equipment. On sale will be the latest cutting-edge tools of oppression, as used in places like Yemen and occupied Palestine.

Citizens and activists have already been busy trying to stop these activities in London. As armoured vehicles were being brought into the east London venue, one brave activist clambered aboard:

🚨 Breaking 🚨
A Manchester rebel is surfing an APV on its way to one of the world's largest and most despicable war machine exhibitions, DSEI in London.

Protests will be held outside the ExCel Centre until 17 September. And organisers urged people to join at the gates of the event or online.

📢📢the week of action to #DisarmDSEI is here!

the world's largest arms fair is back & so is the resistance

Declassified UK has released a short explainer video on the event:

The police are allowing weapons into London.

The UK's major arms fair starts next week — but people are already protesting.

Meanwhile, as part of the resistance, artist Darren Cullen produced a poster branding the fair the “world’s biggest bomb sale”:

In Liverpool preparations are underway to oppose the AOC electronics arms fair. As The Canary reported recently, the event will have a range of electronic warfare and surveillance equipment on sale. And it will also be available to authoritarian regimes.

Liverpool Against the Arms Trade published details of its rally on Twitter:

The march against the @ACCLiverpool Arms Fair is tomorrow.

Despite activists lobbying to have the event cancelled, the ACC venue, located on Liverpool’s waterfront, has refused. As a result, the band Massive Attack has cancelled its long-planned gig in solidarity.

Owing to the @ACCLiverpool decision to not cancel the Electronic Warfare arms fair in Liverpool & in solidarity with campaigners @AgainstArms @RedRosa91940184 @MerseyPensioner @CAATuk our long scheduled show in that venue will now be cancelled https://t.co/y34Km4h9Qw

So whether you’re in the North or the South, you can help stop arms firms invading our cities with their deadly wares this weekend. You can visit the Campaign Against The Arms Trade website for more information on the DSEI protest or the AOC action.