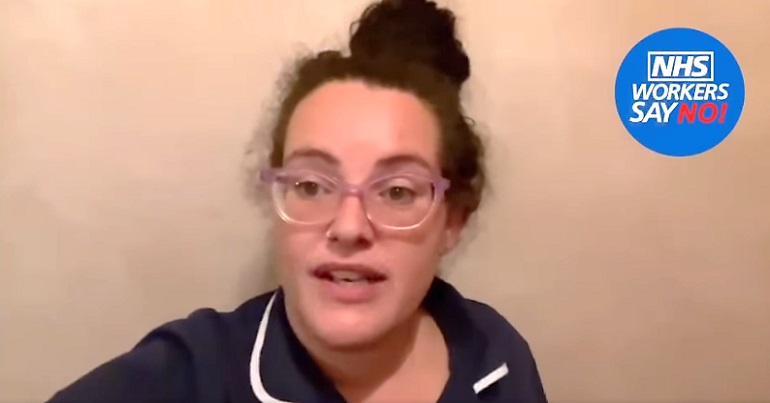 An NHS nurse has spoken out over the Tories’ proposed 3% pay rise for some health care workers. It’s a telling insight into the feelings of many frontline staff over what she calls a “decimated” service. The sting in the tail is that this nurse has had enough. And she’s leaving the NHS.

This year, the Tory government has been at the centre of a storm over NHS pay. First it was only going to give workers a 1% pay rise. Now, the Tories have upped this to 3%. As The Canary previously reported, unions like the Royal College of Nurses (RCN) and the British Medical Association (BMA) are balloting members over the pay rise. They’re also pondering possible industrial action. Unison is doing similar. It said the 3% rise does not “meet the real living wage of £9.50 per hour for the lowest paid” staff. It also claimed it widens the gap between those at the top and bottom of the pay scale.

At the heart of this story are frontline NHS staff.

Kirsty Brewerton is a clinical sister. In a video, she explains why she’s voted for her union to reject the government’s 3% offer, saying she’s done this for “multiple reasons”. Brewerton said the main one was that she’s:

genuinely concerned for the NHS and for its workforce. We have not seen levels of [staff] shortages like this ever before. We are completely reliant on agency and bank staff, and now we’re finding that we cannot even find those people to fill shifts. You’re seeing services decimated . We’re demoralised. We feel completely undervalued. And I just do not think that the 3% is going to do anything at all to address the issues that we are facing.

The NHS is in a crisis created by the Tories and the coronavirus (Covid-19) pandemic. For example:

Meanwhile, the Trades Union Congress (TUC) analysed NHS pay. It found that for countless staff, the 3% pay rise would actually be a real terms pay cut. This would be a fall of between 7.3-7.6% since 2010. The sharp end of this is that NHS professionals are leaving their jobs. According to the Guardian, polling in May found that one in four staff were “more likely to leave” than the previous year. A think tank warned this could lead to over 300,000 NHS staff quitting. Brewerton is one such person. As she summed up:

I myself am leaving. And I’ve done this

for my colleagues, because I can see how much they’re struggling.

“We have never known staff shortages like this before”

“This ship is sinking”

As The Canary previously reported, grassroots campaign group NHS Workers Say No has been running a petition. It calls on the Tories to give NHS staff a 15% or £3k pay rise – whichever is the greater. As of 12pm on Friday 10 September, over 820,000 people had signed the petition. You can add your name here. The group has also held protests over the pay rise.

Holly Turner, a nurse from the group, told The Canary that:

NHS workers are sick to death of being degraded by this government, and are leaving in the droves. The implications of this affect us all. It translates to poor patient care and enormous waiting lists. But it also gives the Tories a free pass to palm off more ‘failing’ services to the rich elite.

This government has no intention in investing in NHS staff or protecting the future of the NHS. Privatisation is happening now and our pay is one of the levers. In the midst of this, they introduce a hike in National Insurance. This means in effect we are funding our pay rise ourselves. This is while the Tories make moves to pass the health bill. But it will do nothing to address the real issues we are facing in the NHS. Instead, it will just offer further powers to Sajid Javid while stripping back our rights.

A nurse with 10 years experience quit her role this week. They said to me: ‘this ship is sinking and I ain’t going down with it’.

A step too far?

The Tories may well be playing with fire over their insulting 3% pay offer. Polling shows the majority of the public supports more money for NHS staff than what the Tories have offered. Given they encouraged us all to clap for NHS workers during the pandemic, this slap in the face may be an insult too far.