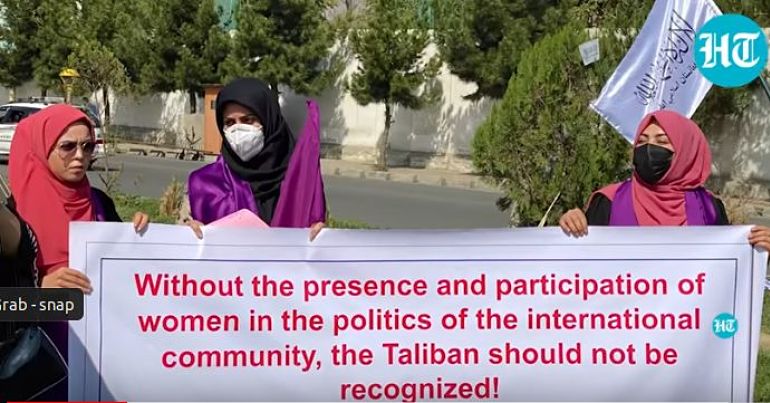 Protests continue on the streets of Kabul and other cities in Afghanistan. Meanwhile, over hundreds of activist organisations and individuals around the world have pledged support for the Afghan women facing oppression by the Taliban.

On 4 September, women protesters attempted to march to the presidential palace in Kabul. But the Taliban attacked them with tear gas:

The women demanded there be no recognition of Taliban government without the full participation of women in politics and without recognition of their right to work. Tear gas was reportedly used to disperse the demonstrators and one woman allegedly beaten. Women also reportedly demonstrated in Herat and other regional cities.

The Taliban fired in the air to disperse these protesters (parts of this footage may be distressing for some readers):

Despite a ban by the Taliban on demonstrations, protests continued in Kabul and other cities such as Takhar, Parwan, Badakshan, and Ghazni.

Meanwhile over 370 activist organisations and hundreds of individuals have pledged to take to the streets on 25 September in support of Afghan women.

Their demands are as follows:

Previously, The Canary published messages of defiance by the Revolutionary Association of Women in Afghanistan (RAWA). There were also messages of support from a number of Kurdish women’s organisations, including the armed YPJ (women’s protection units).

Now Kurdish women’s organisation Kongra Star is calling on all governments and the UN to refuse recognition of a Taliban government:

Refuse to recognize a Taliban government, which has no legitimacy, & terrorizes the people of Afghanistan, women & girls in particular 👇#StandWithWomenofAfghanistan#No2TalibanYes2WomensRights pic.twitter.com/ouM7g2x4JT

The Kurds of northern Syria have been at the forefront of the war against Daesh (ISIS). NATO member Turkey is at war with the Kurds and Yazidis – a war which will likely benefit IS-Khorasan (ISIS-K). IS-Khorasan is the organisation that claimed responsibility for the Kabul airport bombing. As one commentator observed:

Thus, the more Ankara erodes the ability of Kurdish and Yazidi militant groups to combat ISIS, the greater the chance Turkish forces could face ISIS-K attacks in Afghanistan, like the one that killed some 180 people at Kabul airport last month.

It now appears that Turkey, led by authoritarian Recep Tayyip Erdoğan, is working up a deal to provide intelligence and military support to the Taliban. Indeed, on 18 August, Erdoğan explained:

The main point is to reach an understanding with the Afghan authorities. For example, we can achieve this with a bilateral agreement like we did in Libya.

And in July, Erdoğan admitted Turkey:

has nothing against the Taliban’s ideology, and since we aren’t in conflict with the Taliban’s beliefs, I believe we can better discuss and agree with them on issues.

“Let Us No Longer Mourn but Make the Enemy Weep!”

In a statement issued on 3 August, RAWA declared:

we call for the establishment of a democratic front against the Taliban, we call upon all democratic, secular, anti-fundamentalist and anti-occupation forces, all our tormented women, girls and men, to say that nothing will come out of mourning. Let us rise and resist against the Taliban and their partners, in any way and at any level, and give them a taste of defeat and sorrow.

The Afghan people – particularly women and their supporters globally – are now the only true opposition to the fundamentalists.